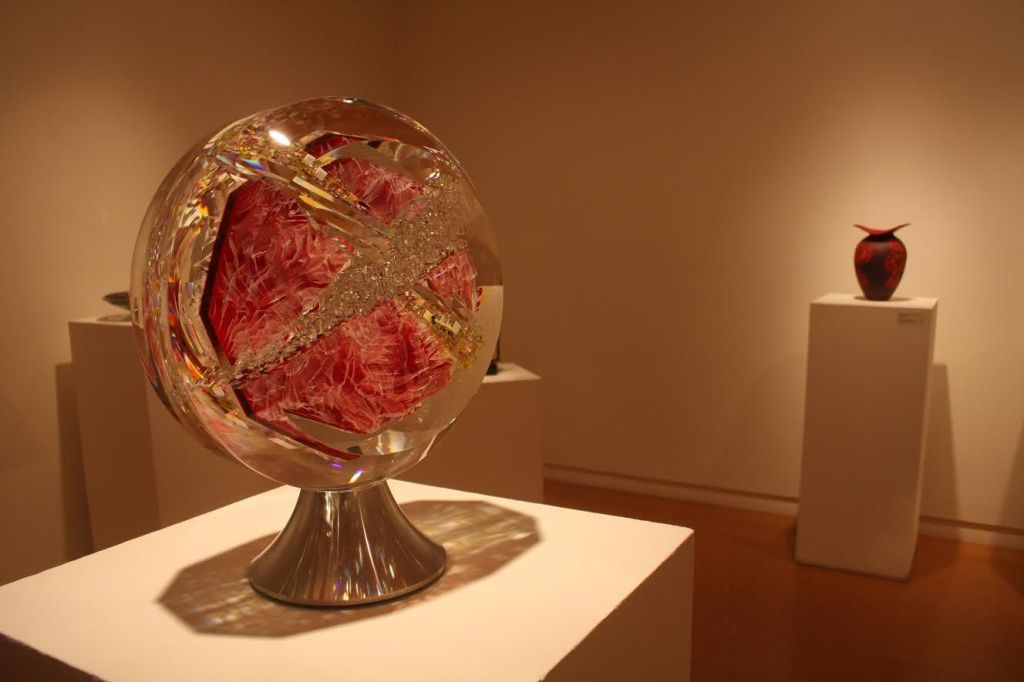 Tom Smith can tell you how beautiful studio glass art is, but says you really have to see it to understand it.
Now you can do just that.
Selections from the extensive collection of Charlotte philanthropists Isaac and Sonia Luski are on display at the Waterworks Visual Arts Center through January. The exhibit is being shown as part of the celebration of the Salisbury Community Foundation’s 70th anniversary.
Smith has served on boards of both the Salisbury Community Foundation and the Foundation for the Carolinas, which has shown pieces from the Luski Collection for the past several years at its headquarters in Charlotte.
“I’m so happy we’re bringing these pieces to Salisbury,” Smith said Thursday evening, during a reception and dinner for the Salisbury Community Foundation. “This is just a touch of the collection.”
The pieces rarely travel.
“This exhibit is a way to introduce people to the Salisbury Community Foundation, with that kind of draw,” he said.
Michael Marsicano, president and CEO of Foundation for the Carolinas, said that the Luskis were thrilled for people to be able to see this artwork.
“It is a joy for them to share their passion for the arts,” he said Thursday evening.
Post photographer Jon Lakey and I had the good fortune to meet the Luskis at their home in 2008.
The Luskis still live in the same modest brick house they purchased in 1962. They’ve put on two additions to the house to show off their contemporary art collection — mostly glass, but which includes paintings as well.
The additions let in the light, showcasing the glass to its best possible extent.
“Light is very important to this medium,” Luski told us then.
The Luskis’ collection, to be sure, is impressive. At the time, they had collected some 700 pieces of art.
And if Luski liked a certain piece, he bought the entire set.
“I thought it would make a nice statement,” Luski said when he showed us a set of vases by Michael Shumke.
Then he grinned, sheepishly, and waved his hand dismissively.
As impressive as the collection is, what made more of an impression on Jon and me was the graciousness of our hosts, as well as the compelling story of their lives.
In 1961, Sonia and Isaac Luski fled Cuba with two paintings, three children and four suitcases. They eventually made their way to Charlotte, where Luski got in on the early days of real estate development in the Queen City. He became partners with his brother, Abe, in Shamrock Management Corp., which today owns apartments and shopping centers.
Over the years, the Luskis have collected art and encouraged their children and others to do the same.
“It’s good to inspire people to collect,” Sonia Luski told us that day. “It’s important to support the artists. It’s a legacy. This is for the soul. This is healing.”
The Luski Collection is part of an exhibit at Waterworks Visual Arts Center called “Spaces Within.” Featured in other galleries is artwork by Maria Michaelson with clay, wood and bronze sculptures, and mosaic sculptures by Jeannette Brossart. Waterworks is located at 123 E. Liberty St. Hours are 10 a.m.-5 p.m. Monday-Friday and 10 a.m.-2 p.m. Saturday. Visit www.waterworks.org for more information.