Chaplain and former jockey to speak at Grateful Heart Ministries 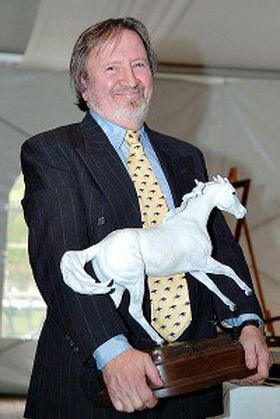 As a professional jockey, Eddie Donnally struggled with bulimia, alcohol, drugs and abuse before finding God in a prison cell in 1996.
Donnally, now 71, turned his life around, and since then has served as a hospital and hospice chaplain.
Donnally will be in Salisbury next weekend for two events. He’ll speak at Grateful Heart Ministries, 2600 Cottage St., at 6:30 p.m. Saturday, Sept. 27, and will be the featured speaker at the 10:30 a.m. worship service at Heartsong Church, 2324 S. Main St., Sunday, Sept. 28.
Copies of his book, “Ride the White Horse,” will be available at both events. Proceeds from sales will benefit Grateful Heart Ministries.
Donnally, who now lives in Clearwater, Fla., with his wife, is a friend of Heartsong’s pastor, Tom Teichroew. Both serve as Foursquare chaplains, and as disaster relief chaplains.
Teichroew had used Donnally’s book for a home Bible study, and invited him to come and speak in Salisbury. It’s a bonus for Donnally as his daughter lives in Greensboro.
“I don’t know that I’ve ever heard anyone with the same career path I’ve had,” says Donnally, who stands 5 feet, 4 inches. “It has been an interesting life.”
An understatement, to say the least.
“I’m still alive to talk about it,” he continues. “It’s taken a series of miracles in my life to get me here.”
Along with his chaplaincy work, Donnally is also passionate about speaking in prisons. He endeavors to minister to those with brokenness in their lives.
“You can’t go through the fire unless you’ve been there yourself,” he says.
Donnally, a victim of sexual abuse, says he was blindsided by what happened to him. He’s gone on to receive a doctorate in counseling.
“I really learned what happened to me is not unusual at all,” he says.
And, he says, “There are all kinds of wounds, all kinds of brokenness.”
He hopes that his experiences with substance abuse, anger, depression and a suicide attempt will bring people hope. They can see that he persevered.
“People like to see measurable results,” he notes. “What I was and what I am are two different people.”
Teichroew agrees.
He hopes that people will take away “hope and/or victory” from Donnally’s appearances here.
“There are some people who are in situations that they cannot imagine themselves out of,” he says. “To see someone who’s been a the bottom and who’s been delivered will give people hope. If they don’t know Jesus, this is a good place to meet him.”
Donnally likens his jailhouse conversion to that of the apostle Paul in the New Testament.
“I certainly was knocked off my horse,” he says. During his career, he broke 13 bones.
But, he says, he also experienced the power of God to change lives. “I just want to bring that home — that God can still change lives.”
Donnally was jailed because of domestic abuse — a hot topic at the moment. “I was in jail for hitting my girlfriend when I found God,” he says.
He served time, and ever since has been in serving in full-time ministry.
“I believe domestic violence is wrong,” Donnally says firmly. “I believe God can heal the abuser and the abused. I believe people can change.”
Donnally says he’s raised $2,000 for various charities through sales of his self-published autobiography.
“I want people who need to read it to be able to read it,” he says. “It’s a story of hope and redemption, and it has a good ending.”
That wasn’t always the case.
During his career, he was indicted for fixing a horse race. On one side of him was the FBI, on the other, the mob.
“Why the mob didn’t kill me, I’m still not sure,” he says, “but God brought me through before I knew him.”
Now, he does.
And he knows this: “God’s got a miracle for anybody who reaches out to him.”
Donnally says he still dreams of being on a horse — and they’re good dreams.
Despite the fact that horseracing is the most dangerous sport in the world.
Still, Donnally says, “I lived through it.”
For more information on Eddie Donnally, visit his Web site at www.ridethewhitehorse.org. For more information on Donnally’s Salisbury appearances, contact Pastor Tom Teichroew at 704-798-2048.
Freelance writer Susan Shinn lives in Salisbury.