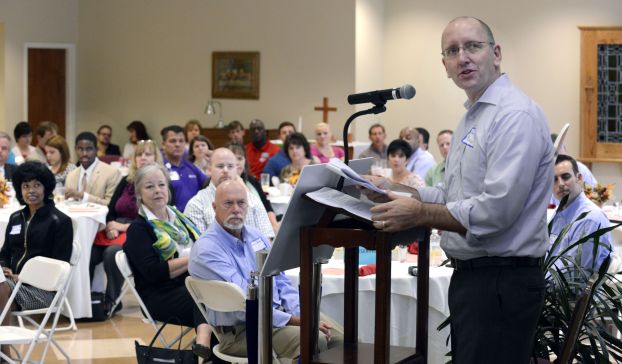 SALISBURY — It’s amazing what you can do with a diabetic sock, surgical tubing and a fish tank filter.

Kerry Campion, a 13-year-old seventh-grader at Knox Middle School, proved just that Thursday morning when she tried to sell potential investors on her “Swell No More” device, designed to provide icy cold treatment to patients burdened by a cast.

Campion and Johnny Ray Bousselot, of Johnny Ray’s Signature Sauces, made their pitches during a “Shark Tank”-styled exercise at the Rowan County Chamber of Commerce’s Power in Partnership breakfast at Trinity Oaks.

Leading the Shark Tank was Greg Brown, administrator of the Charlotte Angel Fund, which provides equity capital to early stage business ventures in the Carolinas.

Compared to the popular television show of the same name, this was “a nice, friendly Shark Tank,” Brown said.

Barbara Hall of Rowan-Cabarrus Community College and Paul Brown of Taylor Clay Products served with Greg Brown on the panel of would-be investors, while the breakfast audience listened in on the presentations, followed up by questions from the panel.

Campion said the idea for Swell No More came from breaking her left wrist last year while playing in a bounce house. Part of her treatment for the pain and swelling was supposed to be the application of ice, but Campion soon learned she wasn’t receiving much benefit because of her Fiberglas cast’s insulation qualities.

It led to some brainstorming and Campion’s trying four different prototypes. The result was a mesh sleeve with tubing that fits under a cast and can be connected to a fish tank filter.

The filter pumps icy cold water from a bowl into the sleeve’s tubing, directly next to the injured area and under the cast.

She also passed around her successful prototype to the breakfast crowd.

Greg Brown asked Campion whether she had done research into any similar products on the market.

Campion said she didn’t find anything for under the cast such as Swell No More. She added that an orthopedist and physical therapist advised her while she developed the product.

Hall asked Campion what she would do if she received an infusion of angel investment money. Among other things, Campion said, she would look to make Swell No More as environmentally friendly as possible and enhance the overall design.

Paul Brown wanted to know whether Campion had received any encouraging signs there could be a market for Swell No More.

She said the main encouragement has come from the orthopedist and physical therapist, and she also believes there could be applications in veterinary treatments.

Bousselot makes his barbecue sauces out of a Federal Drug Administration-approved kitchen in his home in Mount Holly. He is licensed to produce 250,000 pints a year, and right now has the sauces in seven small retail establishments in places such as Belmont, Mooresville, Statesville, Denton, Harrisburg and Charlotte.

Johnny Ray’s Signature Sauces also are sold at festivals and barbecue competitions. He has three sauces — Bourbon Peach, 10 Bones and West Texas Heat. Two other guys help him with the marketing and business side of the venture.

Bousselot has a full-time job as a finish fabricator for Penske Racing and makes the sauces during nights and weekends.

Bousselot said he was looking for a $225,000 investment, for which in return he would offer a 10 percent share in the company. He said the money would be used to build a commercial kitchen, add to the sales force and find a bottling method that’s more efficient than his current funnel and ladle.

At present, he bottles only 48 jars per every batch of sauce he makes. But his sauces — the Bourbon Peach was available at the breakfast for tasting with beef, chicken and shrimp — have been enthusiastically received, Bousselot said.

“It’s not sitting on the shelves, it’s killing,” he added.

The panel asked Bousselot who made contact with the retail stores where the sauces are being sold. Bousselot said he did, and “I’m seven for seven.”

Once people taste it, he added, they are on board.

Was he seeing growth month after month in the store sales?

Bousselot said he really could be in 50 stores — it’s that popular — but he can’t meet that kind of production with his current setup.

Greg Brown wanted to know how Bousselot arrived at the $225,000 request. How did he know that was the right amount of money and the right percentage share of the company?

Bousselot said he thinks it’s what he needs to increase production, pay wages and have a sales force to sell more sauce.

Would he be willing to sell the company down the road?

“I’d like to grow it as far as I can,” Bousselot said, but he would welcome a buyout from a large manufacturer if an offer were ever made.

Hall asked Bousselot how he intended to get the word out about his sauces beyond social media. Bousselot said for now it has to be through retailers, festivals and weekend barbecue competitions. An infusion of cash would help put more people on the ground.

When the Shark Tank had ended, Greg Brown had praise for the presenters.

“Each of you was above average in terms of what we see,” he said.

Brown said he loves hearing these kinds of stories and finds the angel investing process educational, interesting and fun.

“This kind of stuff keeps me outward-focused,” Brown added.

In opening remarks, Brown said the average return on angel investments is 2.6 times the amount invested. For every $10,000 invested, for example, the return is $26,000 on average, though angel investors have to show a lot of patience.

EntreRowan is an entrepreneurial development program jointly managed by the Chamber and Rowan Works, the county’s economic development arm.

Robert Van Geons, executive director of RowanWorks, said members of EntreRowan have been meeting for the past 10 months, looking at ways to enhance local entrepreneurship, determine what resources are available and where the gaps are.

Principal of the Year is good match for West Rowan Middle

By Jeanie Groh jeanie.groh@salisburypost.com Preteen angst and insecurity give the middle school years a bad reputation, but Rowan-Salisbury Principal of... read more