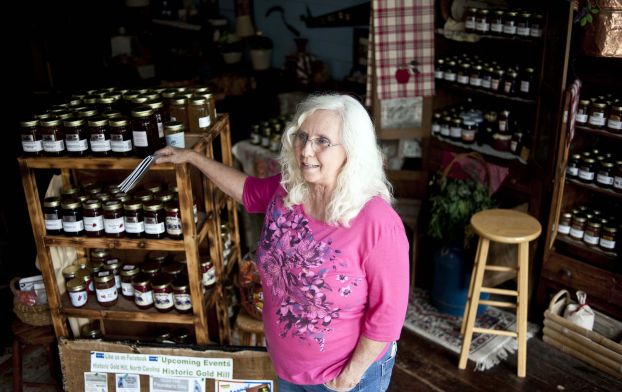 GOLD HILL — It never fails. You stop in Gold Hill, a place steeped in history with a picturesque village that seems out of the pages of some western romance novel, and you wonder why you don’t visit more often.

Folks here are planning for their 25th Gold Hill Founders’ Day Sept. 27, celebrating a history that once prompted the mayor of Charlotte to say he had high hopes his town could be as large and prosperous as Gold Hill.

Vivian Hopkins, vice president and director of education for Historic Gold Hill and Mines Foundation Inc., has been around for every Founders’ Day.

The first was held just days after Hurricane Hugo swept through Rowan County and residents were still sifting through much of the destruction.

But people showed up. That Founders’ Day was held at the Gold Hill Fire Department, and Hopkins said she advertised it far and wide throughout Rowan County and into two other states.

It was supposed to be a one-time event, where the community simply celebrated its history. Hopkins isn’t sure whether it was even referred to as a founders’ day, but when the day arrived, “you couldn’t park a car in Gold Hill,” she said.

Charlie Helderman, one of the old-timers, remarked then, “That little lady brought more people here than the 1930 train wreck.”

Hopkins deflected the praise to many other people, who decided two weeks later they should form a steering committee and explore the idea of creating a foundation to collect and preserve whatever it could of Gold Hill’s mining history and heritage.

Plans also were made for a second Founders’ Day, and by 1992, the non-profit foundation was formed and soon, thanks to a donation of 16 acres by Billie Johnson of Salisbury, the Gold Hill Mines Historic Park was established.

The 1993 event was the first one which moved from the Fire Department to the park along St. Stephens Church Road (Main Street), where it’s held today. It was the same year the park — now 70 acres in size — was dedicated.

Hopkins said her most memorable Founders’ Day was the one in 2001, when everybody was unnerved by the Sept. 11 attacks two weeks earlier and still unsure of their safety in large crowds.

But folks attended Founders’ Day in large numbers, especially for the morning parade.

“Every fire department in the county was represented in the parade,” Hopkins said, “and ran in silence without the usual fanfare with horns and sirens.

“The silence was deafening, and I don’t think there was a dry eye in the crowd.”

This year’s Founders’ Day also should be time for reflection in a community which has a lot to be proud of since 1989.

Few places in Rowan County will you see wood-plank sidewalks and sites such as the E.H. Montgomery General Store and Mauney’s Store, both dating back to around 1840. The Gold Hill Jail and rock wall along St. Stephens Church Road also go back to around 1845, when Gold Hill was a raucous mining camp town with a considerable number of saloons and brothels.

Otherwise, today’s village is a re-creation, but still a monument to preservation, thanks to all of the buildings moved here and often reconstructed piece by piece.

The 1906 File Store originally had been in the Craven community along Bringle Ferry Road, about eight miles from Salisbury. Lee File ran the store from 1933 to 1985, and it was moved to Gold Hill and restored in 2001.

The filling station now on St. Stephens Church Road had been built in 1928 along U.S. 52 after the highway’s completion in 1922. It was moved to the village and restored in 1998.

The bakery is in an original miner’s cabin from around 1840 and had been a three-room home. It was relocated to the village and restored in 2011. Darius Hedrick deserves much of the credit for the vision of the village and, over many years, moving various buildings here and attracting investors to make it happen.

“There’s been so much done to preserve old buildings and build new ones,” Hopkins said. “We’ve had so much fun over the past 25 years bringing this history back to life.

“… It’s an awesome place — worthy of a tourist attraction like Tweetsie Railroad, but it’s more authentic.”

It’s difficult to recite the entire history of gold mining in Gold Hill. Books have been written about it. In brief, gold was first discovered in the Gold Hill region around 1824.

By 1842, Col. George Barnhardt sank the Barnhardt Shaft, which at the time became the deepest vertical shaft in the United States at 435 feet.

At that depth, the vein in the Barnhardt Shaft widened out to about a 20-foot-wide wall of quartz laced in gold, and the tunnel that followed extended roughly 1,500 feet, running under the main street of Gold Hill.

By February 1843, the Earnhardt Mine was dug, and its shaft eventually reached 850 to 900 feet down. When it changed ownership, the name changed to the Randolph Mine.

Together, the Barnhardt and Randolph mines “became the richest and most productive gold mines east of the Mississippi, giving rise to the wealth and prosperity of the region,” Hopkins wrote in a history.

In its heyday, the Gold Hill Mining District had 23 mines, and the population of the town, incorporated in 1843, swelled to some 3,000 people.

The discovery of gold in California in 1849 and the Civil War caused major slowdowns in the mines. There would be periods of resurgence and speculation to come, but nothing to match the 1840s.

Thomas Edison came to Gold Hill in 1889 and inquired about purchasing the mines. He was experimenting at the time with a magnetic flotation device he hoped would aid in separating iron-ore deposits.

Edison leased space in the Gold Hill Mining Office and set up a laboratory in the basement of the Charlotte Mint, but after about a year, Edison gave up on the idea.

By 1907, Hopkins said, the Gold Hill mines closed and production ceased. Birmingham Mining Co. of England would send an engineer back to Gold Hill in the 1950s. C.R. Hayes searched without success for a new vein, and he lost his life in a 1970 fire that consumed the mining office.

“The only thing left standing was the huge safe that once held a fortune in gold bullion,” Hopkins said in her guide to Gold Hill Historic Park.

That safe today is in the museum at Reed Gold Mine.

Fred and Arlene Kessler moved to the Gold Hill village six years ago, making a home in the 1846 Moses Holmes house. Holmes had been a mining engineer from Cornwall, England.

The house has a dry-stacked stone foundation. The stone is tailing rock, the name for throwaway rock which used to be placed in stacks outside mine shafts because it was determined not to be ore-laden.

Fred Kessler said he likes his Gold Hill location because of the people, their friendliness and the history of the place. He established a metal-working shop and gift store close to his house to sell some of his metal animal creations.

On this particular day, Kessler was reassembling the oak timbers to a pre-Civil War cabin that used to be on Gin Road. Kessler was building a 7- by 7-foot garden shed from the materials, and doing a nice job of it.

“Fred is one of our greatest storytellers,” Hopkins said of one of his other skills.

Hopkins and her husband, Hoppy, run the E.H. Montgomery General Store, which before its restoration was leaning at about a 45-degree angle, she said.

The store is probably best known these days at the Friday night gathering spot for blue grass musicians.

Hopkins, who is a N.C. Humanities Council Roads Scholar, often gives presentations on the gold mining history of Gold Hill, which she titles, “If Picks and Shovels Could Talk.”

She also is on the steering committee for the formation of a N.C. Gold Trail, which is still in its infancy but will have Gold Hill has one of its major sites, along with Mint Hill in Charlotte and Reed Gold Mine in Cabarrus County.