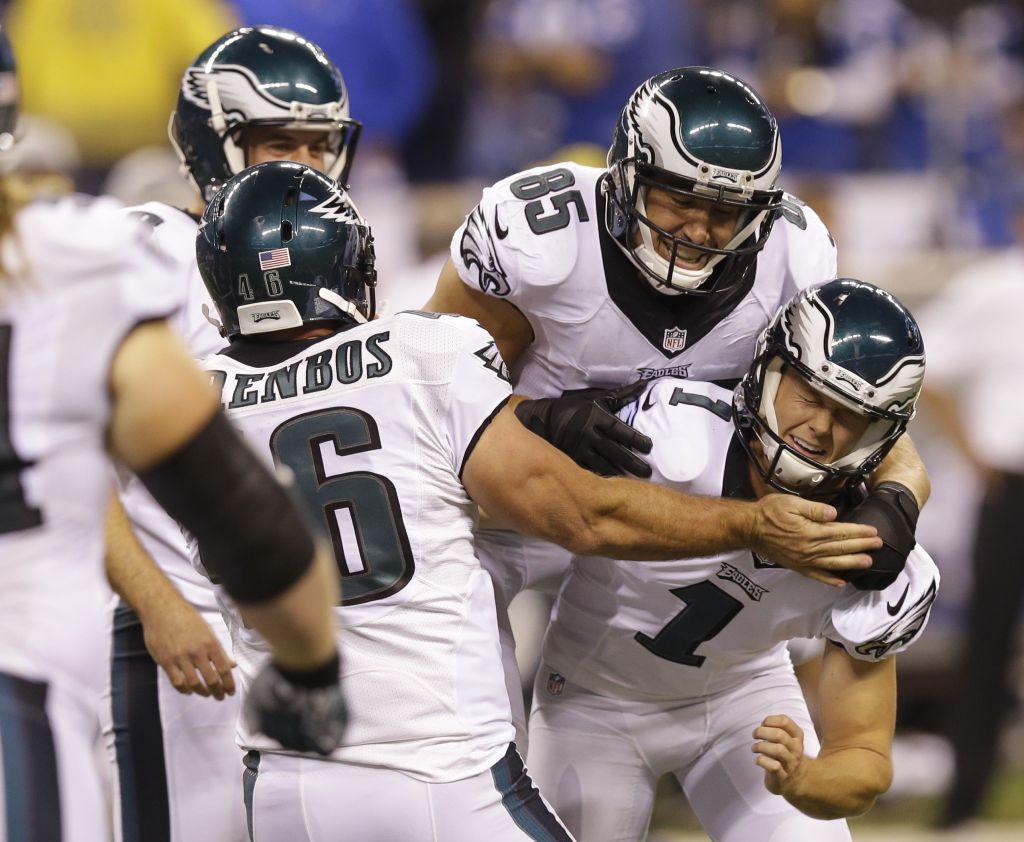 INDIANAPOLIS (AP) — With Nick Foles at quarterback and LeSean McCoy and Darren Sproles in the backfield, the Philadelphia Eagles are never out of the game.
They proved it again on Monday night.
Foles threw a tying touchdown pass with 3:25 to go, and then set up Cody Parkey for the winning 36-yard field goal as time expired, lifting Philadelphia to a 30-27 win at the Indianapolis Colts.
Sproles had seven receptions for 152 yards to go along with a touchdown run as the Eagles (2-0) won their first game on the road for the sixth consecutive season. Philadelphia, which stormed back from a 17-0 halftime deficit to beat Jacksonville 34-17 in Week 1, also became the fourth team in the last 30 years to win consecutive games in which it trailed by 14 or more points in the 2nd half, according to STATS.
“He’s just a special player,” coach Chip Kelly said, praising Sproles for his role in the prime-time comeback. “The first day we had him it was, ‘How many different ways can we find ways to get him the football?’ He’s just a dynamic football player.”
Philadelphia’s latest rally came against the defending AFC South champs, against a team that had never lost back-to-back regular-season games with Andrew Luck at quarterback. The Colts (0-2) led 17-6 at halftime, but committed two costly turnovers in the second half that the Eagles turned into 14 second-half points.
Foles was 21 of 37 for 331 yards with one touchdown — a 6-yard pass to Jeremy Maclin with 3:25 to go that tied it at 27. McCoy ran 20 times for 79 yards and scored Philadelphia’s first touchdown of the night with 4:32 left in the third quarter.
The Eagles appeared to be in trouble when Indianapolis was driving with a 27-20 lead in the fourth. But Luck’s short pass intended for T.Y. Hilton with 5:08 to go was intercepted by Malcolm Jenkins.
Two plays later, McCoy was stopped for a loss but LaRon Landry was called for a questionable horse-collar tackle. Sproles then took a swing pass for a 51-yard gain to the 6, and Foles found Maclin for the tying score.
“Without Sproles, we would be in some trouble, to be honest, we really would. That’s why we’re a team,” McCoy said. “When guys are struggling, he’s picking everybody up. He’s helping me out. I need to get my thing together. I don’t feel like I’m playing to the level I should be playing at.”
Luck, who was 20 of 34 for 172 yards with three TDs, walked into the postgame news conference for the second straight week and said he made a “stupid” decision when he threw the interception even though replays also appeared to show Hilton had been grabbed by a defender. No call was made.
The calls weren’t what the Colts were talking about, though.
Coach Chuck Pagano was more disturbed by the two turnovers, Luck’s pick and Trent Richardson’s fumble at his own 26-yard line, and a defense that couldn’t stop the Eagles over the final 20 minutes of the game.
“The turnovers. Those were the killers in the second half,” Pagano said. “You’ve got to finish games, put people away.”
The Eagles’ potent offense started slow, managing just two field goals in the first half. They finished strong, tying it at 20 when Sproles managed to stay on his feet for a 19-yard run late in the third and again at 27 on the TD pass to Maclin.
Luck drove the Colts right back down the field and hooked up with Ahmad Bradshaw for a tiebreaking score, but Indy couldn’t close it out and the Eagles took advantage.
Indy looked as if it wouldn’t need Luck’s late-game heroics, thanks to a ground game that piled up 169 yards.
But the turnovers changed the whole complexion of things.
“We knew we had a field goal in the bag. Everybody saw what happened,” Pagano said. “The last words before the play were ‘Take care of the football.”’
Instead of taking a 10-point lead, McCoy got the Eagles’ offense back on track and Sproles took care of the rest.
NOTES: Eagles CB Nolan Carroll II left the game with an injured elbow but returned in the third quarter after X-rays were negative. … Philadelphia linebacker Mychal Kendricks left in the third quarter with a calf injury. … Indy was hosting its first Monday night game since 2010.