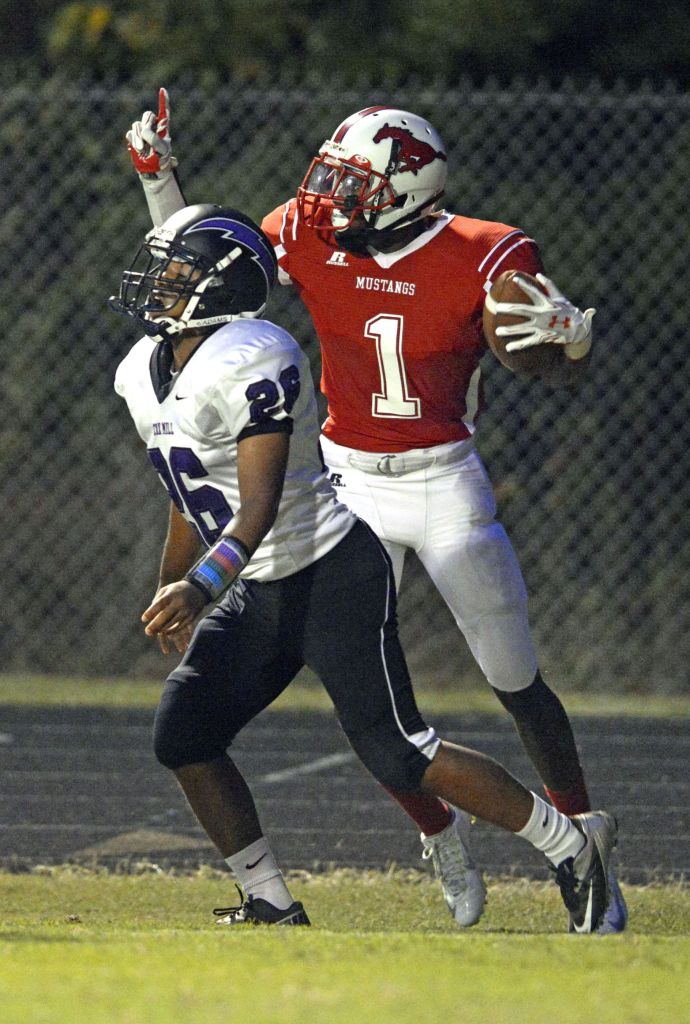 GRANITE QUARRY — The scouting report for East Rowan’s football team may need a rewrite.
At least, Friday’s molar-grinding 46-43 win against Cox Mill sent a message to the rest of South Piedmont Conference: don’t ignore the Mustangs.
“You absolutely know people are going to doubt East Rowan,” senior quarterback Sam Wyrick said. “Teams in this conference are really good. But we hope to prove people wrong — and every great season starts with 1-0.”
This was a terrific start for East (2-1, 1-0). It provided a lift the Mustangs hope will springboard them into the playoff picture.
“We had six starters out tonight,” said first-year coach Kenneth McClamrock. “A lot of kids who had not played at all in the first two games stepped up big. You lose six kids and come out with a ‘W’ in a conference game — you have to be proud of that.”
There were a number of pivotal plays, but perhaps none more significant than the late-game interception sophomore Tay Davis made that all-but-sealed the verdict. Cox Mill (1-3, 0-1) had already scored a pair of fourth-quarter touchdowns when it advanced to the East 14. On third-and-7, quarterback Hunter Longmire dropped back to pass and fired a spiral toward wideout Trevor Gichaba that had first-and-goal written all over it.
“It hit right off his shoulders and came to me,” said Davis. “I just seen it and then it was there.”
Davis’ first career pick came with 4:47 remaining and put the outcome squarely in Wyrick’s hands. With precision, the veteran QB gained the last five of East’s 24 first downs and melted the clock.
“He had great timing with his receivers,” Cox Mill coach Craig Stewart said after Wyrick passed for 300 yards and five touchdowns. “We could never get enough pressure on him. And those (receivers), they could turn a little 3-yard sideline pass into a 12- or 15-yard gain.”
Sam Wyrick and his brother Seth Wyrick played pitch-and-catch all night. Seth Wyrick made 10 receptions worth 126 yards and scored on a pivotal 45-yard pass play while East was battling from behind in the first half.
“We were starting to build momentum,” Sam Wyrick said. “We had a long way to fight back, but that play was a big one.”
East trailed 20-6 after a first-quarter that saw Cox Mill speedster Devin Cobb return the opening kickoff 91 yards for a touchdown. It was 28-13 when East took over on its own 33 with 7:38 remaining in the first half.
“It was up-and-down, up-and-down all night,” Stewart said. “Neither team could ever stop the other one. That was frustrating.”
The Chargers had 510 total yards on offense.
East marched to the Cox Mill 45. On second-and-10, the Wyricks hooked up on a perfectly-executed play-action play.
“We were running a play where Seth can read the cornerback,” Sam Wyrick said. “I trusted him all the way.”
It launched a scoring flurry that saw East post the game’s next 33 points — including a 5-yard TD catch by Simon Soles that put the Mustangs ahead 32-28 at halftime.
In the third period, Jake Boltz bulldozed into the end zone on a 1-yard run and teammate Naquise Caldwell reeled in a 34-yard touchdown catch, his third of the game. Caldwell had six catches for 108 yards.
“He was open a lot,” Sam Wyrick said after completing 24 of 30 attempts. “So I had to hit him.”
By game’s end the Mustangs accumulated 530 yards and reached the end zone on seven of their 13 possessions.
“These kids are learning how to win,” McClamrock said. “They were down but never out of it. They had a game plan and stuck to it tightly.”