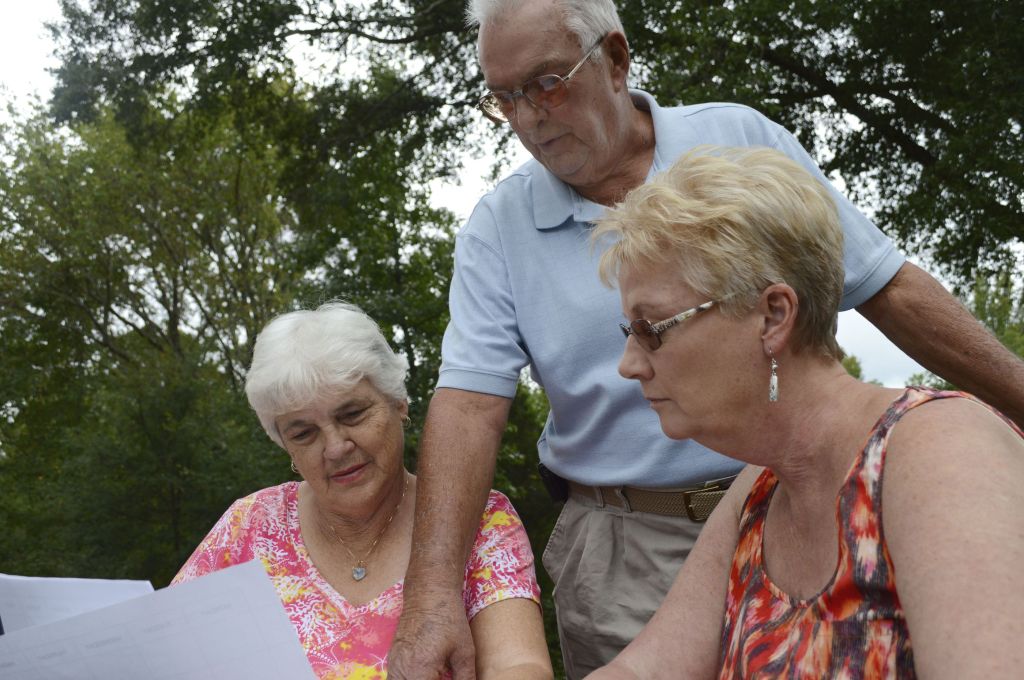 Rowan County residents near a textile manufacturer on Heilig Road say noise from the plant is negatively affecting the quality of life in surrounding neighborhoods.
The disruptive noise first started in late July, emanating from a Gildan plant, according to multiple residents of The Gables. Noise from Gildan’s facility is less frequently disturbing now, said Larry Ries, who lives in The Gables neighborhood. Though, residents say the net effect of the noise, regardless of its frequency, is negative. After hearing complaints, a Gildan spokesperson says the company has started an internal investigation into causes of the noise.
Initially, it was constant, Ries said.
“It was just this loud, disturbing noise all the time,” he said.
Residents of The Gables soon began to keep track of the noise; some logs were more organized than others. Some logs simply consist of small note pads on a back porch.
Mary Forbes, on the other hand, has a complete archive of noise levels on a calendar. Forbes’ log classifies noise levels with various adjectives — extreme, high, medium or low. Some days, Forbes simply writes “yes” if Gildan’s noise is noticeable. On others, she wrote “no” if noise was nonexistent or quiet enough to not be bothersome.
Ries eventually became irritated in mid-August. He talked to the Salisbury plant’s engineer and explained the bothersome noise. At a follow-up meeting, Ries and Forbes asked if the Gildan plant was committed to correcting the problem.
Ries said management responded affirmatively — Gildan was committed to reducing noise levels. Ries and Forbes said they were told the noise came from large fans that are used to collect fabric particles and circulate air.
Ries and Forbes returned from the meeting satisfied. They wrote a letter to Gildan thanking the company for its commitment to improvement.
A few days later, things got worse, Ries said.
“On Aug. 20, something happened and one of the machines, or more than one, went absolutely berserk,” Ries said. “It was screaming. We haven’t heard a word from them since then.”
Gildan first announced intentions to open a Salisbury plant in December 2012. In October 2013, Gildan officials said the company would expand operations, investing $250 million to build a yarn spinning facility behind its already acquired site. It officially began production in February 2014.
Plant manager Billy Lemmons declined to comment to the Post about noise complaints and forwarded questions to Gildan’s headquarters in Montreal, Canada. Gildan spokesperson Anik Trudel said they were aware of complaints and had begun an internal investigation about causes of the excessive noise.
“At the end of July, Gildan was advised by a Mr. Larry Ries, a homeowner of The Gables community, of the existence of some noise in his neighborhood. Gildan proactively initiated a dialogue with him as well as with other community members and took immediate action to thoroughly investigate the matter,” Trudel said Thursday in a statement emailed to the Post. “While we are confident that the company is fully compliant with applicable sound regulations, we remain sensitive to the Gables community concerns and will maintain an open dialogue regarding this issue pending the end of our investigation.”
More recently, noise has fluctuated, said Jodie Marley, who also lives in The Gables neighborhood.
“It seemed like it would be quiet for a while and all of a sudden it’ll start back up again,” Marley said. “It’s sometimes not pleasant anymore sitting out back. It’s tranquility. It’s why we moved here.”
Ries said the plant’s noise still occasionally reaches unbearable levels and can still be heard inside of houses. At medium and lower levels, Gables residents compared the noise to a constantly running air conditioner.
The plant is frequently quiet during daytime hours and louder at night, according to Ries.
Gildan occupies a site formerly used by PGT Industries, which makes windows and doors. Marley said the PGT plant’s activities were audibly noticeable, but easy to overcome.
Recently, Ries turned to Granite Quarry and the Rowan County Sheriff’s Office for help. Granite Quarry’s limits end just to the east of The Gables. The neighborhood is technically a part of the city of Salisbury, but the Gildan plant is located outside of any municipal limits.
Sheriff Kevin Auten said the plant noise is an unusual situation. The county’s ordinance only applies to amplified noise, such as cars, parties or bars.
“You might could technically find some criminal violation of disturbing the peace,” Auten said. “It’s kind of like the train coming through or tractor trailers going down the road. I don’t know exactly at this point what enforcement we could take.”
Ries and Forbes say they are concerned that when leaves change colors and begin falling in autumn, the noise could grow and currently low levels could be amplified. The plant and nearby neighborhoods are surrounded by thick, wooded areas.
Residents of The Gables and surrounding communities simply say they want the noise to stop and for life to return to normal.
“In the beginning, they were very nice and we trusted them,” Forbes said about Salisbury Gildan plant employees. “We welcome them because they employ a lot of people, but it’s not right for a plant to move into a neighborhood like this and make this kind of noise.”
Contact reporter Josh Bergeron at 704-797-4246