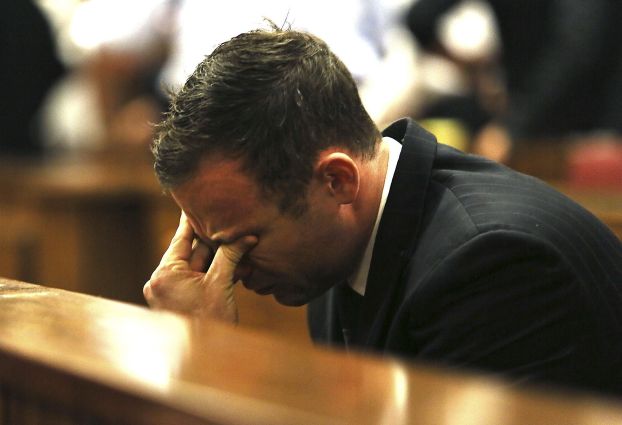 Your daily look at late-breaking news, upcoming events and the stories that will be talked about today:
1. PISTORIUS RECEIVES GUILTY VERDICT
The judge in the murder trial against the double-amputee athlete convicts him of culpable homicide, or negligent killing, in the shooting death of girlfriend Reeva Steenkamp, which can carry a sentence up to 15 years in prison.
2. ESCAPED SCHOOL SHOOTER CAPTURED
Authorities apprehend the convicted killer of three Ohio students, 19-year-old T.J. Lane. Two prisoners who fled with him are also back in custody.
3. CAN OBAMA PROSECUTE WAR ON ISLAMIC STATE GROUP WITHOUT CONGRESS’ CONSENT?
Critics say the president’s decision to authorize U.S. airstrikes inside Syria, along with expanded strikes in Iraq, has short-circuited the congressional oversight that he once championed.
4. ETHNIC FIGHTING IN CENTRAL AFRICAN REPUBLIC KILLS 5,000 SINCE DECEMBER
AP’s tally represents more than double the death toll of at least 2,000 cited by the United Nations, underscoring how a U.N. mission is coming too late for thousands.
5. EVIDENCE GROWING HAMAS USED RESIDENTIAL AREAS IN WAR
While admitting “mistakes,” the group says it had little choice in Gaza’s crowded urban landscape and took safeguards to keep people away from the fighting.
6. WHO IS LIKELY TO DRAW CHEERS IN IOWA
Hillary Clinton returns to the state for the first time since an “excruciating” night in 2008, not quite yet running for president but sure to be offered a warm welcome by Democrats hoping she will.
7. DOCUMENTS SHOW GOVERNMENT TOOK HARD LINE IN EXPANDING SPY PROGRAM
The Bush administration threatened to fine Yahoo $250,000 a day unless it turned over online information.
8. SCOTTISH CELEBRITIES TAKE SIDES ON INDEPENDENCE
The Yes side has James Bond, but the No campaign has Harry Potter.
9. WHICH TEST MAKES SAN DIEGO CABBIES CRY FOUL
Body odor is among 52 criteria that officials at the city’s airport use to judge taxi drivers, who say it smacks of prejudice and discrimination.
10. SPONSORS KEEP CLOSE WATCH ON NFL PROBE
Major brands are paying attention to make sure the organization doesn’t fumble the investigation into how its executives handled evidence in the Ray Rice domestic violence case.

Your daily look at late-breaking news, upcoming events and the stories that will be talked about today: 1. WHAT OBAMA... read more