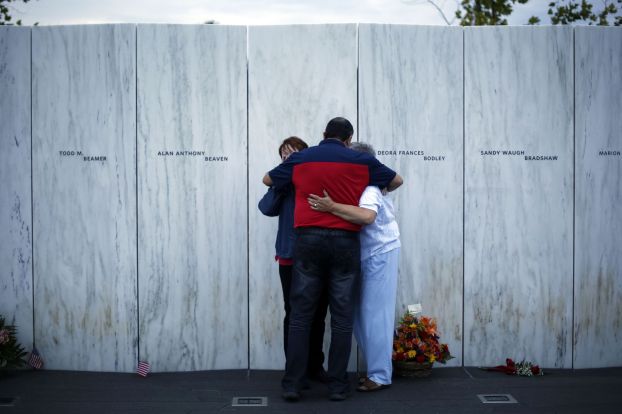 SHANKSVILLE, Pa. — The 40 passengers and crew who died when hijacked United Airlines Flight 93 crashed in southwestern Pennsylvania during the Sept. 11, 2001, terrorist attacks were to be honored in a new way during the 13th anniversary ceremony at the Flight 93 National Memorial.
A Congressional Gold Medal awarded to those who died at the site of the memorial will be presented Thursday as part of the ceremony. Bells will be rung and the names of the victims will be read at 10:03 a.m., the moment the airliner crashed as passengers fought with hijackers for control of the jet.
Thursday’s ceremony also comes as the National Park Service marks progress on a $17 million to $23 million phase of the project that includes a visitors’ center and a learning center, which officials hope will boost the number of annual visitors to the memorial from 300,000 to more than 500,000.
“We have to make sure there will be a place to come in the future to learn about what happened,” Gordon Felt said just after dawn Thursday, near the tent where the memorial ceremony was to take place. Felt’s brother, Edward, was among the passengers killed.
Dennis Hastert, who was Speaker of the House of Representatives when the attacks occurred, was scheduled to deliver the keynote remarks at Thursday’s ceremony. Pennsylvania Gov. Tom Corbett also was scheduled to attend.
The Congressional Medal will be on display at the memorial through Sunday. It will go on permanent display once the visitor’s center opens, hopefully for the 14th anniversary. The same medals are being awarded at the World Trade Center and Pentagon sites, which were also ravaged by al-Qaeda-hijacked airliners that morning.
Rachel Stingis, 30, of Belle Vernon, was among the first spectators to arrive. Stingis had visited the site before the memorial was built, but never attended an anniversary ceremony. She said she was in high school at the time of the attacks and watched the coverage on television in class.
“Being a senior ready to start college I thought it was the end of the world,” she said.
Flight 93 was traveling from Newark, New Jersey, to San Francisco when four hijackers took control, with the likely goal of crashing it into the White House or Capitol. The 9/11 Commission concluded that the hijackers downed the plane as the 33 passengers and seven crew aboard the plant revolted.
A Memorial Plaza near the crash site consists of a white stone wall that traces the doomed plane’s flight path, with each victim’s name engraved on a separate panel. There are plans for a 93-foot-tall tower with 40 wind chimes.
While the memorial is a lasting legacy to those who died, Felt said it’s also important for the families of those involved to gather at the site each anniversary.
“It really brings a sense of comfort to come together with other people who have suffered the same loss,” Felt said. “It’s difficult each year to reopen that wound, but at the same time it’s important to remember.”

Your daily look at late-breaking news, upcoming events and the stories that will be talked about today: 1. OBAMA TO... read more