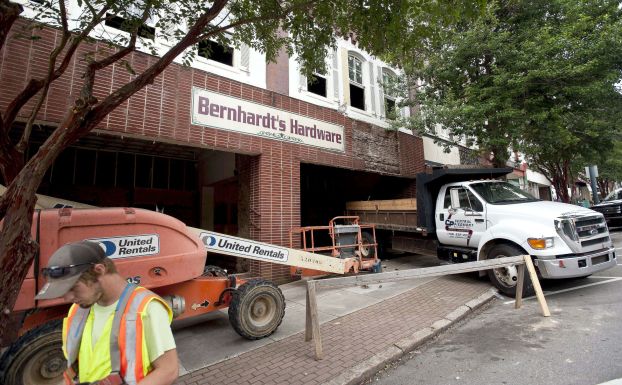 SALISBURY — Early demolition work at the old Bernhardt Hardware has revealed termite damage, evidence of the original tiled entrance and questions about what will become of some structural glass in front.
Central Piedmont Builders started renovations this week of what really is a block of three buildings at 111-115 N. Main St.
Wednesday morning, work continued in stripping the Main Street facade to its bare structural bones.
Chris Adcock and Logan Ren were in a bucket prying loose two layers of brick facade, exposing some termite-eaten wood and steel beams. Storefront glass and doors also have been removed, except for the building section closest to the Square.
Chad Vriesema, who purchased the old hardware store with partner Bryan Wymbs last year, said he is waiting on word from state and federal preservation offices on whether the Vitrolite or Carrara Glass in that portion has to be saved.
Those kinds of opaque, structural glass were common in storefront facades in the previous century. Because there are at least four other examples of the glass on the street, Vriesema said, his project might not be required to keep it.
Vriesema also heads Central Piedmont Builders. He would like to have two upstairs apartments and space for a downstairs restaurant completed by Christmas. Overall, the project aims at providing six apartments upstairs and a restaurant and two additional retail and/or office spaces downstairs.
Workers uncovered an angled, recessed area on the lower end of the building that was the original store entrance. It was several feet below the present street level and still had a section of its mosaic tile from the early 20th century.
Betty Dan Spencer, a local historian, puts an 1896 date on these three buildings making up the project. She calls it the Shaver Block, in reference to Edwin Shaver, who was the first owner.
Vriesema said the overall condition of the old hardware store is poor, but he’s saving as much of the original wood as possible. The total project probably will take about a year-and-a-half.
Vriesema said the construction push is on in trying to take advantage of state preservation tax credits, which will sunset at the end of the year.
He added the project should benefit greatly from downtown grant incentives the city of Salisbury plans to establish soon to encourage residential living and rehabilitation of existing structures.
Vriesema and Wymbs bought the property for $200,000.

SALISBURY ­— With reluctance from some members, the Salisbury Planning Board voted 7-2 Tuesday in favor of a special-use permit... read more