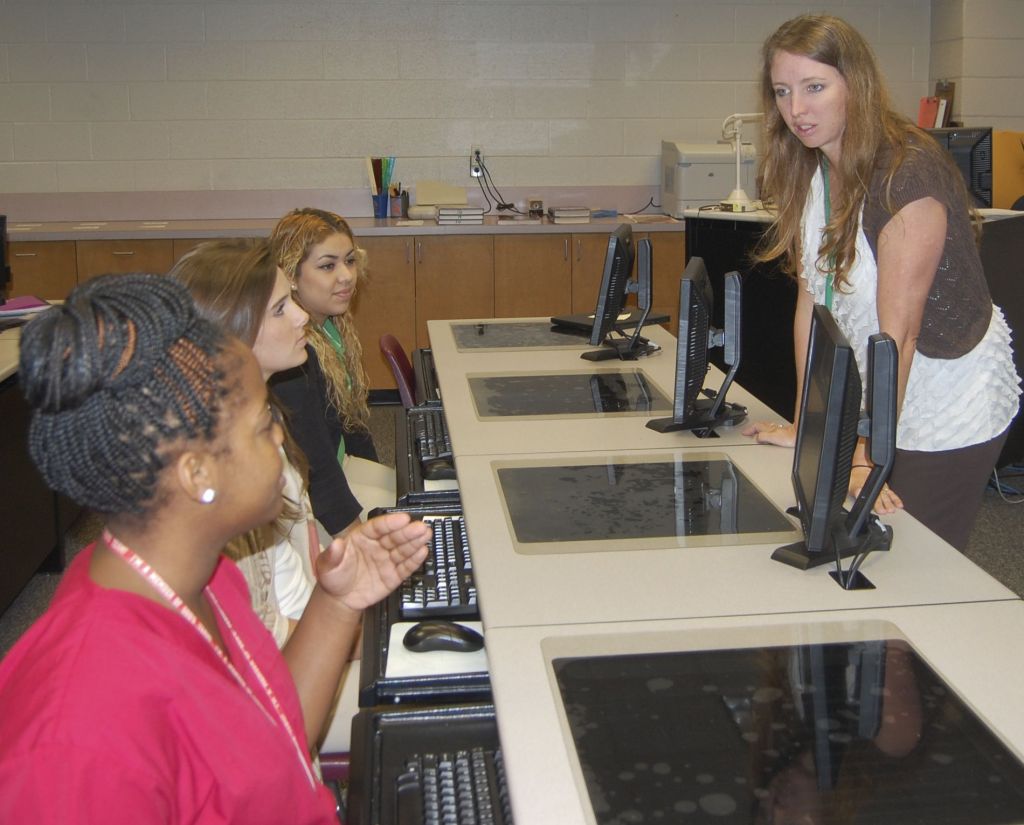 KANNAPOLIS — Jada Balknight is a busy girl.
The high school junior begins each day with a three-hour cosmetology class at Rowan-Cabarrus Community College, then returns to A.L. Brown for two traditional classes and an online course followed by cheerleading practice.
But Balknight’s busy schedule wouldn’t be plausible without Kannapolis City Schools’ iKann program — a personalized learning program that offers high school courses online.
Students set their own pace and can complete their work at any time as long as it’s all finished by the end of the semester.
Balknight knew she wanted to take cosmetology classes, but she didn’t have the flexibility in her schedule to make her dreams a reality — so, she made some space by taking Spanish I and Spanish II through iKann.
She took the first class over the summer, and is taking the second this semester.
Balknight is one of roughly 100 A.L. Brown students who take part in the program piloted by the school last year.
“This allows us to let students learn in a way that works for them,” said Kelly Burgess, Kannapolis City Schools’ director of accountability and online learning coordinator.
The flexibility is ideal for students with family responsibilities or odd work schedules.
“It lets them extend their learning to whatever time works for them,” she added.
Teen living, ceative writing, Spanish I, Spanish II, advanced functions and modeling, psychology, geography and foods are currently offered online, but courses change based on student interest level.
The courses are taught by Kannapolis City Schools teachers, as well as one retired teacher. Although the classes don’t meet in person, they are capped at 15, allowing the teacher to work with the students one-on-one if needed.
“We know learning doesn’t come without a relationship with the teacher,” Burgess said.
Jennifer Ward teaches creative writing through iKann.
“I thought it would be an excellent avenue for the course,” she said, adding that many creative people like to express themselves, but not in person.
“I hear more from students who wouldn’t speak up in class,” she said.
“Online is a completely different medium,” Ward said.
Her class is divided into two sections — poetry and short fiction. The sections are separated by a midterm exam and capped by a final exam.
Ward said it typically takes students about a week to get through each unit, making the class roughly 16 weeks long. The actual time varies, however, since online classes are self-paced.
“I’ve seen a higher success rate because it is self-paced,” she said.
“I’ve found that the work load is less because everything is submitted online,” Ward added.
Ward’s online course is extremely popular.
“We had to turn students away, and there’s a waiting list,” she said.
Balknight doesn’t just enjoy iKann because of the flexibility it affords, it also caters better to her learning style.
“I’m more of a visual learner,” she said, adding that her Spanish classes have relied heavily on videos.
She can also spend as much time as she needs to on certain pieces of the curriculum.
Claudia Pesina, also a junior, was unable to take Spanish II this semester in a classroom because it was full. But because of iKann, she was able to still take the class required to graduate.
Jecyra Battle and Zach Martin took Ward’s creative writing class. The two took the class because they enjoyed Ward’s class last year and wanted to take another class with her.
Kalista Nedoff also took Spanish I over the summer and is taking Spanish II right now via iKann.
“I didn’t have any time in my schedule,” she expalined.
Nedoff is working on her certified nursing assistant license along with her high school degree. She uses the flexibility to get ahead.
“It’s really for mastery,” Burgess said.

Planning Board gives thumbs up to school system’s central…