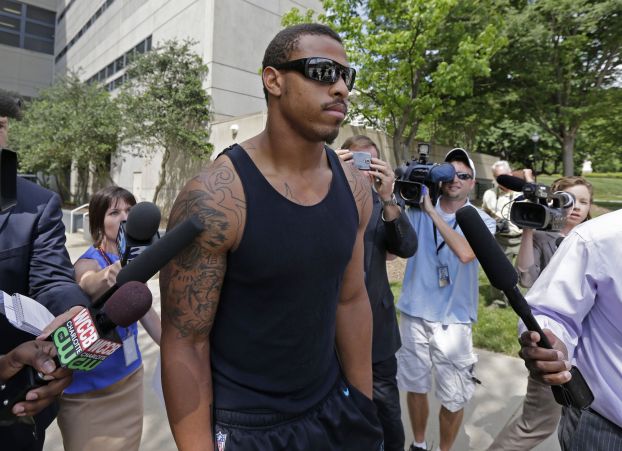 Domestic violence in NFL not just limited to Rice

CHARLOTTE, N.C. (AP) — Carolina Panthers Pro Bowl defensive end Greg Hardy has been convicted on two counts of domestic violence and is still playing. Ray McDonald of the San Francisco 49ers also remains active while he is being investigated for abuse allegations.
The Panthers and 49ers both say they are following the NFL’s lead, waiting for the legal process to run its course. Neither team has provided details of its investigations.
The cases have similarities to that of Ray Rice, who was released this week by the Baltimore Ravens and suspended indefinitely by the league after an explicit video surfaced of him hitting his then-fiancee.
A law enforcement official told The Associated Press on condition anonymity that he sent a copy of the video to the league in April.
The NFL is under scrutiny for its wait-and-see approach in domestic violence cases like Hardy’s.
Judy Harris Kluger, a former New York City judge and now executive director of Sanctuary for Families, is anxious to see how the league handles the two pending cases.
“I think the test for the NFL will be what they do with the other people who are charged now,” Kluger said. “And I don’t imagine there’s a videotape of that. What else did the NFL think happened in that elevator? So yes, it’s a very graphic depiction, and they took the action they took now. But I think all of us will be looking to see what they and other organizations do going forward.”
While McDonald has not been charged, Hardy has already been convicted on two counts of domestic violence. He has appealed and a hearing is scheduled for Nov. 17.
Hardy, one of the stalwarts on the Panthers’ stout defense, is making $13.1 million this season as team’s franchise player. He had four tackles and one sack in Carolina’s season-opening victory.
Though he has already been found guilty, the league is sticking by its policy to wait until the appeal process has been heard before making any decision on a possible suspension.
“The Hardy matter is under review,” league spokesman Greg Aiello said. “The case has not been resolved by the court.”
San Jose police are still actively investigating the Aug. 31 incident involving McDonald and detectives will turn over findings to the Santa Clara District Attorney’s office for review, Sgt. Heather Randol, a police spokeswoman said Wednesday.
McDonald is scheduled to appear in court on Sept. 15.
Though Hardy has appealed his conviction, the Panthers don’t have to wait for the NFL to take action. They have the option to bench Hardy — or release him.
The Ravens did not take action, opting to wait for an NFL ruling, though they now say they let their fans down.
When asked Wednesday if the Panthers made the right decision allowing Hardy to play, coach Ron Rivera replied, “We are going through the process and while we’re in the process we’re not going to comment about the situation.
“It’s a very tragic situation that is going on and we’re going from there,” Rivera said of the Rice case. “I have a tremendous amount of empathy and respect for the people who are in this situation. It’s very difficult.”
Rivera said Hardy did not practice because he was given a “personal day” Wednesday.
Hardy used the time to meet with his attorney. Chris Fialko confirmed in an email that he met with his client but wouldn’t elaborate on the specifics of the meeting.
Hardy was convicted on July 15 and the victim testified that she was assaulted by him in March at his apartment after a night of drinking. She said Hardy threw her down on sofa full of guns and tossed her into the shower. She also said he threatened to kill her and put his hands around her neck.
The 6-foot-4, 275-pound lineman was sentenced to 18 months’ probation and a suspended 60-day jail sentence. Mecklenburg County Judge Rebecca Tin imposed the sentence after 11 hours of testimony, saying “the court is entirely convinced Hardy is guilty of assault on a female and communicating threats.”
Those punishments were suspended pending Hardy’s appeal of the conviction.
Panthers owner Jerry Richardson and general manager Dave Gettleman declined interview requests Wednesday through the team’s public relations staff.
Though NFL Commissioner Roger Goodell was in North Carolina on Wednesday, Aiello said he did not meet with Hardy. The commissioner spent Wednesday at a high school in Wake Forest, discussing the league’s Heads Up football initiative in an invite-only affair.
Goodell, who admitted he “got it wrong” in the Rice case, originally suspended the running back for two games. He has since implemented a new policy in which a player is suspended six games if convicted for domestic violence and suspended indefinitely for a second offense.
Hardy’s agent Drew Rosenhaus declined to address how the new policy could impact Hardy’s future.

Appalachian State has been on the extreme ends of the spectrum in the win and loss columns this season. The... read more