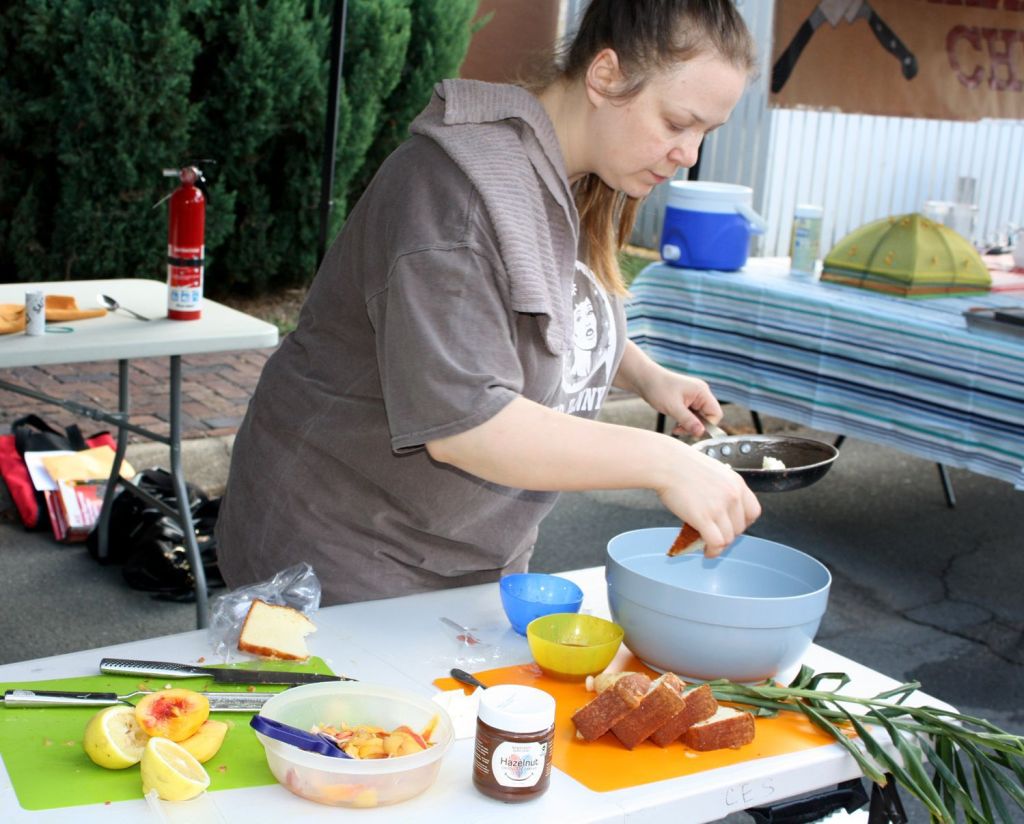 The heat was on for the third and final Market Chef competition for 2014, even though it was the dessert round. The sun beat down on the contestants and the wheels of creativity were on fire under each tent.
The contestants included Penny Collins and assistant Laura Vella, winners of the Aug. 9 main dish event, and Angela Crowell and assistant Cameron Crowell, her son. Angela was a judge at the event Penny and Laura won.
And Rebecca Ulrich, who won the first competition with her bruschetta appetizer, was a judge this time. It all came full circle.
Things were a bit different in this round, said Danelle Cutting, horticulture and local foods agent with the Cooperative Extension Service. Contestants were allowed only five pantry items and had to use all three mystery ingredients, and they only had 30 minutes, instead of the usual hour, to cook. They still had 15 minutes to shop and $10 to spend.
Ultimately, simplicity won out, but the choice of items at the market is smaller these days as the growing season winds down.
Angela and Cameron bought peaches, watermelon, cantaloupe and figs. Penny and Laura bought only peaches.
Their three mystery ingredients were pound cake from Christine Turco’s How Sweet It Is; fresh ginger, from Lee Ly; and strawberry wine jam from Dover Vineyards.
“That’s dessert right there,” Penny said, as she peeled peaches and pointed to the mandatory ingredients. Still, she used her chef’s training to bring out the most of what she had.
Angela went for something a little more multi-faceted. She got a head start on the Penny/Laura team. She and Cameron quickly made cantaloupe and watermelon balls, then turned to stemming and having the tiny, pink-fleshed figs. Angela planned to cook the figs with sugar, a touch of water and grated ginger. One of her pantry ingredients was tiny phyllo cups.
Penny quickly peeled and sliced the peaches, which she planned to cook with ginger, a special spice blend she brought, and butter, another one of her pantry items.
Both teams had brought sugar. Angela’s was granulated sugar and Penny’s was confectioner’s sugar.
Penny had also brought a lemon and Nutella. Angela’s secret ingredient was her homemade mango-pineapple preserves.
Angela’s plan was to make a fruit relish to go with the pound cake, and to fill the phyllo cups with a mixture of cream cheese, sugar and a little cream, top it with the cooked figs and then glaze it with the strawberry wine jam. She had sent Cameron off to whip some cream, a daunting task in the heat.
Penny, meanwhile, was using her microplane to zest her lemon and to grate the ginger, creating a lovely scent at her table. She mixed the lemon juice and zest, sugar and some of the jam into a sauce. More of the jam — especially the strawberries, were going into a pan with the cut up peaches, butter and sugar, to create a sort of caramel sauce. Again, the aroma was divine.
“What texture for the peaches?” Laura asked Penny. “Al dente,” she replied and they each tasted.
“More sauce, I think,” Penny said. “More butter and sugar, then,” Laura replied.
Over on Angela’s side, she was filling her phyllo with her cream cheese mixture and setting it on bright green pottery rectangular plates. “I don’t want to know what the others are doing, it will make me too nervous,” she said. Angela’s whipped cream was suffering from the heat, but they filled a bowl with ice and set the cream in it to try and save it.
By now, everyone was sweating — contestants, onlookers, Extension staff and Master Gardeners who were helping out.
Penny and Laura tasted their strawberry-ginger-lemon sauce and talked about what it needed.
“A little salt?” Laura asked, adding a few grains.
“Yep, that’s it,” Penny said. “The salt brings out the tang, gives it depth of flavor.”
It was almost time to get it on plates, ready for the judges. Penny and Laura were also crisping their slices of pound cake in the electric skillet, with a little butter. This week, there wasn’t too much demand for cooking instruments, and everything seemed to be working.
While Angela carefully brushed her phyllo cups with the strawberry wine jam, Penny and Laura were putting sauce and peaches on their pound cake slices.
Angela took out tiny rectangular bowls for her fruit relish. She set it in the middle of the larger plate, then spread her own mango-pineapple preserves over the cake and topped it with whipped cream.
At the last minute, Penny dusted their dessert with confectioner’s sugar.
The judges for this round, in addition to Ulrich, were Lee Ly, who provided the ginger, and Christine Turco, who provided the pound cake. They looked very serious as they set out.
After tasting Penny and Laura’s buttered pound cake, topped with peaches in the caramel sauce, they uttered “Mmm.” They turned to their scoring sheets. Moving on, Ly was assisted by her young son, Simon, who very seriously tasted everything. More scribbling took place, and then the judges turned in their forms for Cutting to tally.
“Wow,” Cutting said. “This is going to really, really close.”
“Whew!” she finally said. “Just three points difference.”
Toi Degree, Cooperative Extension’s family life and consumer agent, rushed to get prizes from vendors and a plaque from her car.
Cutting made the announcement to the crowd, explaining the tight voting.
Penny and Laura won again, by that slim three points. Angela was happy with second since it was her first competition.
Degree handed the winners a bouquet of flowers from Ly, pimento cheese from both McCombs and Matt Trexler, and a candle from Hessian Studios.
“Just wait till next year,” Cutting said. “We’re going to do more and we’re going to make it tougher. I wanted to blindfold the judges, but …’
Degree said “I stopped that. I stopped that.”
But anything could happen in the 2015 version of Market Chef.