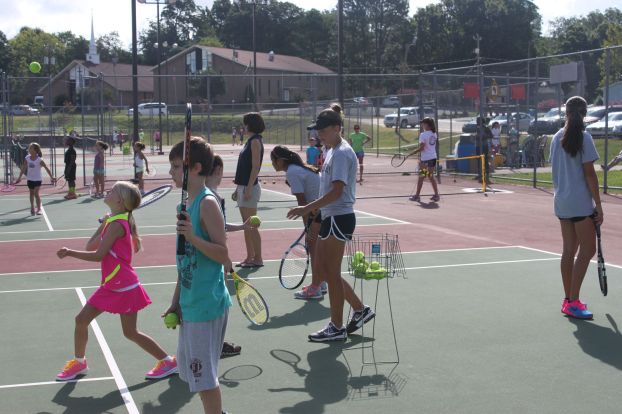 Hornets reach out to community

It was hot enough to fry an egg on the Salisbury tennis courts on Saturday morning, but the SHS girls team conducted the program’s second annual free tennis clinic.
Former Hornet Madeline Hoskins came up with the idea a couple of years ago and got the ball rolling.
Junior Kayla Honeycutt, a three-year member of the team, picked up where Hoskins left off and organized Saturday’s event.
“I had the privilege of taking over the youth tennis clinic from Madeline,” Honeycutt said. “I had some big shoes to fill, but we as a team want to do more than just play tennis.”
Participants were divided into age groups for drills.
“It didn’t matter if they had played tennis or not,” Salisbury junior Kathryn Rusher said. “ We just wanted to give kids the chance to experience the game.”
Parent Lori Goodnight, who brought her children said, “ It was a great program with great drills. My girls had so much fun.”
Jerome and Joy Blakeney, who brought their children, thought the free tennis clinic idea was wonderful.
“ We really appreciate the girls reaching out to the community and exposing kids that have never played tennis to the game,” Jerome said.
Salisbury coach Scott Maddox was understandably proud of his team.
“ With so much going on, it’s a credit to the girls for giving up their free time to expose others to a game they love,” he said. “ Tennis has always been a source of pride for the Salisbury athletic program. It seems as if every year a new group of players emerge in both the girls and boys programs that are a threat to win individual as well as team championships.”
When most high school students would rather have been in bed, the Hornets relished the opportunity to get up and give back a little bit.
“We really feel it’s important to reach out to the community,” Honeycutt said. “I think everyone had a good time and we couldn’t have been more pleased with the turnout.”
Forty-three kids, ages 3-14, showed up.
Tim Pittman, Salisbury’s cross country and wrestling coach, brought his kids.
“It’s nice to have an opportunity for youth tennis in Rowan County and hopefully this will be a catalyst for growth,” he said.
Suzanne Yost brought her daughter Adalyn, who was touching a tennis racket for the first time.
“I appreciate the girls exposing her to tennis,” Yost said. “ They were professional, courteous, and patient, and overall just fabulous. Adalyn fell in love with tennis. She called her dad and told him she was playing real tennis.”
Grace Steinman, a Salisbury junior, was at last year’s clinic and said she was happy to see it grow in numbers.
“All of us love tennis and it’s nice to have the opportunity to share that passion,” she said.
Other Hornets who participated in the clinic were Emily and Maria Capito, Madison Day, Makalya Mather, Julia Honeycutt, Isabell Tempelton, Gemma Brown and Bethanie Stauffer.
The Hornets will move from teaching to playing Tuesday when they host Lake Norman Charter, the top-ranked team in 2A.

College Football Writer After impressive performances in two of the young season’s most attractive nonconference showdowns, Oregon jumps to No.... read more