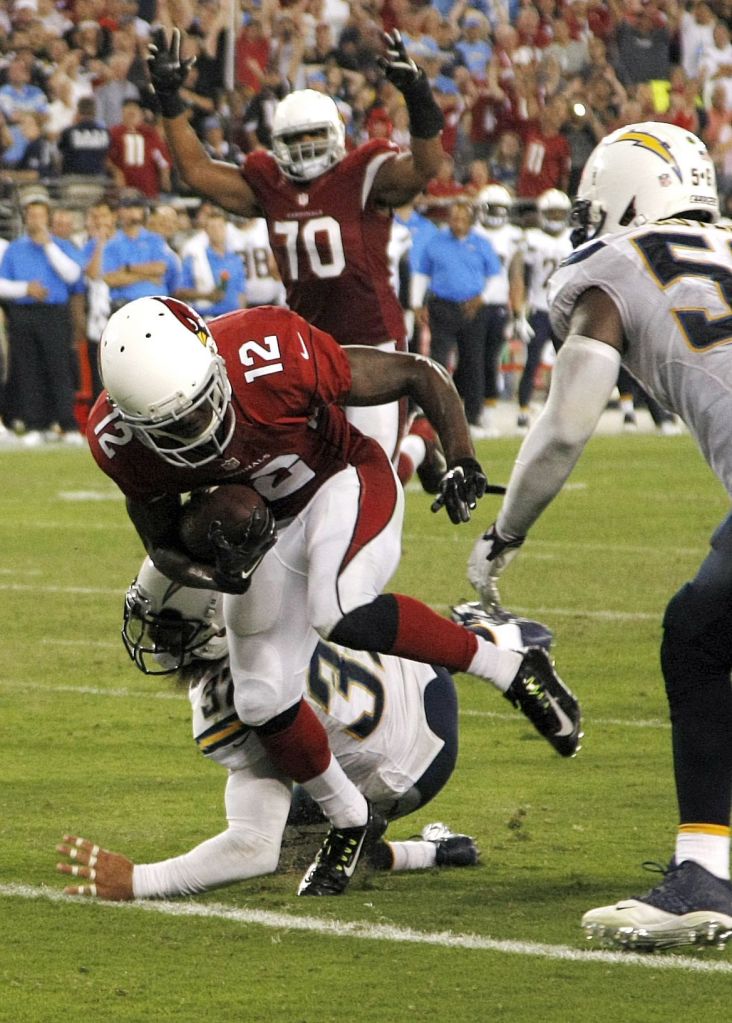 GLENDALE, Ariz. (AP) — San Diego’s defense held up well when the offense sputtered.
Once the offense showed signs of life, the defense couldn’t hold up its end.
Instead of opening the season with a win, the Chargers started it feeling as if they left one behind in the desert.
Philip Rivers led two scoring drives in the third quarter, but San Diego’s defense allowed Arizona to rally with two in the fourth quarter of an 18-17 loss to the Cardinals Monday night.
“Tough one to lose, obviously,” Cardinals coach Mike McCoy said. “Didn’t play well enough in the fourth quarter, being up and not finishing the game. That’s what it comes down to: When the game was on the line, we didn’t make enough football plays as a team in all phases of the game.”
San Diego had some questions on the defensive line heading into the season, but that group was solid early, getting some decent pressure through the first three quarters.
The Chargers held the Cardinals to a pair of field goals in the first half — one came after a turnover by San Diego’s offense — and Jerry Attaochu set up their only points in the opening 30 minutes by blocking Drew Butler’s punt.
Attaochu also stripped Carson Palmer for a fumble that the Chargers recovered in the third quarter, setting up another score.
The offense, despite all the playmakers on that side of the ball, clunked through the first half as one drive after another stalled.
Once the third quarter started, the offense clicked, racing 80 yards in seven plays for a 6-yard touchdown pass from Rivers to Malcom Floyd. The Chargers scored again right after the fumble on Arizona’s opening drive of the half, this one a 20-yard run by Ryan Mathews.
“We talked about at halftime dominating the first five minutes of the third quarter and we got dominated,” Cardinals coach Bruce Arians said.
Up 17-6 and seemingly in control, San Diego couldn’t close it out.
Arizona started a drive in the third quarter that carried into the fourth, moving 64 yards in 10 plays for a 5-yard touchdown pass from Palmer to Stepfan Taylor.
The Cardinals failed on the 2-point conversion and the Chargers still seemed to be in decent shape, pinning Arizona at its own 9-yard line with just under 7 minutes left.
But the Cardinals picked apart San Diego’s defense, marching down the field for another score, this time capped on a 13-yard catch-and-dash through the Chargers by rookie John Brown with 2:25 left.
“There were a number of plays we had the opportunity to make,” McCoy said. “We didn’t make them.”
Rivers had some mid-range completions in the first half, yet couldn’t’ finish off drives. He also had a pass intercepted by Jerraud Powers with 22 seconds left, setting up rookie Chandler Cantanzaro’s second field goal, a 44-yarder at the halftime horn that put Arizona up 6-3.
Rivers started to find a bit of a rhythm to open the third quarter, orchestrating the long scoring drive and the short one after the turnover.
Rivers had the Chargers close to field-goal range after Arizona scored its first touchdown in the fourth quarter, but a snap that bounced off his chest pushed them back and led to a punt. San Diego’s chances ended with three straight incompletions by Rivers on a last-gasp drive.
“A lot of times (you) lose a game instead of winning a game,” said Rivers, who threw for 238 yards on 21-of-36 passing. “That’s not to take away from Arizona. They won the game but we in a lot of ways had self-inflicted things that had nothing to do with the defense. When you don’t catch a snap or throw an interception, little things like that.”
San Diego’s running game didn’t help much, which was surprising since it was supposed to be a strong point.
The Chargers added Donald Brown during the offseason to a backfield that includes Mathews and Danny Woodhead, but the trio was ineffective against the Cardinals. San Diego had 52 yards rushing on 24 attempts, led by Mathews’ 40 yards on 12 carries.
NOTES: Arizona’s Larry Fitzgerald caught one pass with 4:04 to play to keep alive his streak of at least one reception in 150 consecutive games. … Cantanzaro also hit a 22-yard field goal, the first of his career. … The Cardinals inducted former quarterback Kurt Warner into their Ring of Honor during a halftime ceremony. … San Diego starting DL Frostee Rucker did not play after suffering a calf injury in the first quarter.