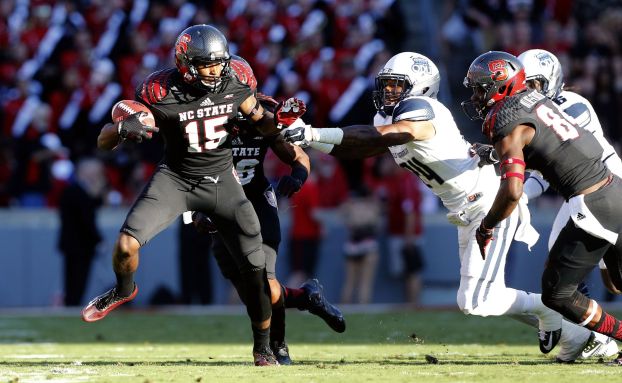 RALEIGH, N.C. (AP) — North Carolina State is getting the hang of finishing with a flourish.
Shadrach Thornton rushed for 86 yards and three touchdowns to help the Wolfpack beat Old Dominion 46-34 on Saturday night.
N.C. State rallied from a halftime deficit for the second week in a row, scoring touchdowns on five consecutive possessions to take the lead and pull away.
“I really think it’s just our focus toward the second half,” N.C. State quarterback Jacoby Brissett said. “Once we’re in that locker room at halftime, we understand that it’s time to attack. We’ve got to find a way to put four quarters together and start clicking from the start.”
Brissett passed for 253 yards and two touchdowns for the Wolfpack, who started 2-0 for the second time in as many seasons under coach Dave Doeren.
Wearing black and gray uniforms rather than its customary red and white, NC State featured a balanced attack. Brissett completed 21 of 29 passes without an interception, and the Wolfpack rushed for 242 yards, 6.2 yards per attempt.
Thornton capped N.C. State’s string of touchdowns with a 23-yard touchdown run up the middle, breaking two tackles en route to giving the Wolfpack their final margin with 3:59 to play.
“I’m proud of our offensive football team and the way they got us in the game and the way that they physically finished rushing the football in the fourth quarter,” Doeren said. “They responded every time we needed them to.”
Taylor Heinicke completed 35 of 49 passes for 274 yards and two touchdowns for Old Dominion (1-1).
Ray Lawry rushed for 71 yards and three touchdowns for the Monarchs, who dropped to 0-4 all-time against opponents from the Atlantic Coast Conference.
Old Dominion came up short despite accumulating 504 total yards, converting 10 of 18 third-down plays and converting 5 of 6 fourth-down tries.
“In the second half, we didn’t have the ability to stop them,” Old Dominion coach Bobby Wilder said. “They got us with some really good schemes. We’re young on defense, and we had a really hard time getting the guys adjusted.”
The first meeting between the teams featured five lead changes, including three in the third quarter.
It was familiar territory for the Wolfpack, who overcame a 10-point deficit in the fourth quarter to defeat Georgia Southern 24-23 last week.
The Wolfpack took the lead for good at 32-28 late in the third quarter on a 16-yard touchdown pass from Brissett to Stephen Louis. Matt Dayes then capped N.C. State’s first possession of the fourth quarter with a 10-yard touchdown.
Old Dominion closed within 39-34 on a 9-yard touchdown catch by Antonio Vaughan with 5:57 remaining, setting the stage for Thornton’s back-breaking jaunt after a direct snap from center.
“Once I had my eyes locked in on the goal line, it could have been the whole team trying to stop me,” Thornton said.
Old Dominion raced out to a 21-10 lead with touchdown drives of at least 10 plays and 75 yards on three of its first four possessions.
The lone exception was an interception by Heinicke that N.C. State converted into a touchdown.

Thornton capped the drive by scoring on a 2-yard run to give the Wolfpack a 10-7 lead, their lone lead of the first half.