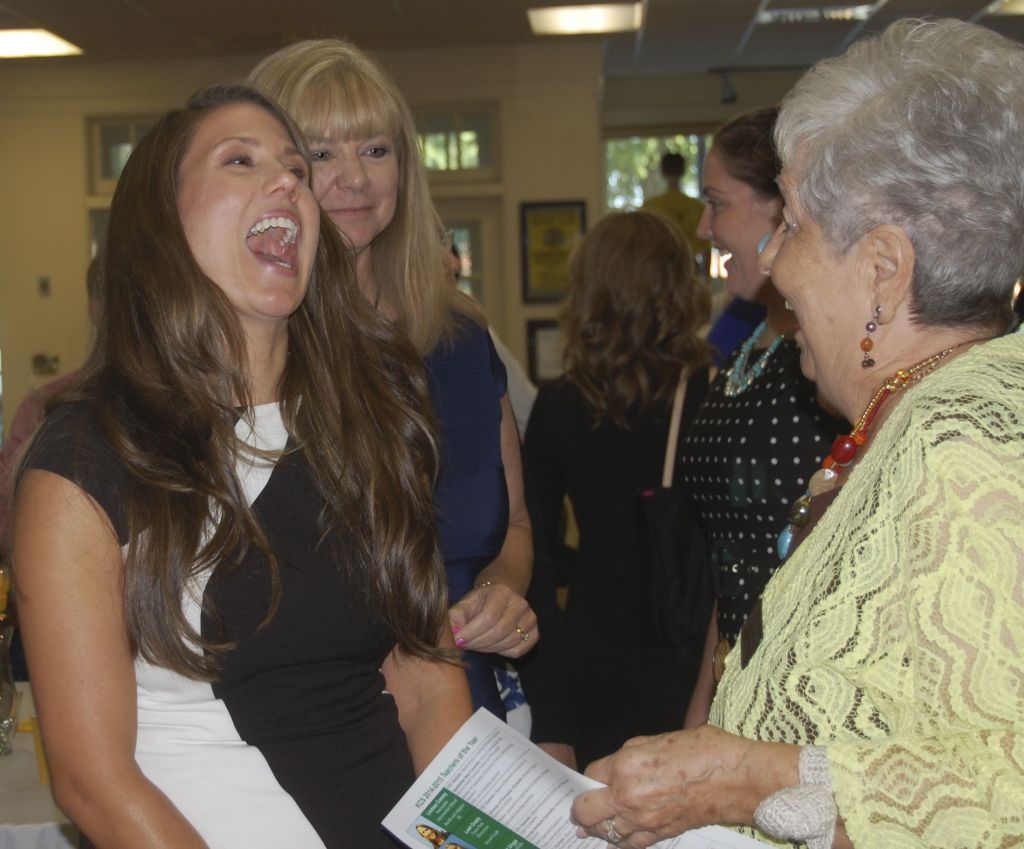 KANNAPOLIS — Lindsay Cooney is Kannapolis City Schools’ 2014-15 Teacher of the Year.
The Kannapolis Intermediate School health and adaptive physical education teacher received the award at the district’s Teacher of the Year Breakfast Friday.
Each school in the district named a teacher of the year at the end of the school year. Those teachers are honored at the annual awards breakfast, and the district teacher of the year is announced.
Cooney began her career at Kannapolis Intermediate seven years ago as a fifth-grade math and science teacher, but her principal, Todd Parker, suggested she take the health and adaptive physical education position so she could teach every child in the building.
“Mrs. Cooney was clearly the perfect choice, because she now has the opportunity to motivate and inspire every student that passes through Kannapolis Intermediate School,” he said in a press release.
Cooney said Kannapolis City Schools is a family.
“Once you join the family, you just don’t leave.”
Cooney developed a partnership with Cabarrus Health Alliance and helped start the Smart Girls Know program and a running club.
Choosing the teacher of the year is “always a hard, hard decision,” said Superintendent Dr. Pam Cain.
“This was the best group of folks and the most difficult decision we’ve had to make,” said Ellen Boyd, the district’s director of community relations. Boyd has been on the teacher of the year selection committee for more than 20 years.
The 2013-14 teacher of the year, Rebecca Merriman, said Cooney’s poise was the deciding factor for her.
Kathleen Woerner, last year’s runner-up, said Cooney “took control of the room.”
“The confidence really stemmed from her passion about education,” Merriman said. “She’s just a dynamic, all-around teacher.”
Cain said it was Cooney’s passion for teaching and the “unbelievable energy and passion for the work.”
Cooney said she was overcome with disbelief when she heard Cain call her name.
“I really didn’t expect it,” she said. “All teachers deserve this award.”
Cooney received $1,000 from Wellington Benefits, will be considered for the regional teacher of the year honors and will serve as a spokesperson for the district over the next school year.
Cooney has a master’s degree from the University of North Carolina at Charlotte, where she graduated with honors. She has a bachelor’s degree from Appalachian State University in communications. She also double minored in photography and family consumer science.
Cory Stirewalt, a social studies and psychology teacher and A.L. Brown High School, was this year’s runner-up for teacher of the year. He received a $500 check from Wellington Benefits.
Stirewalt has nine years of teaching experience. He holds a bachelor’s degree in history from Lenoir-Rhyne University, a master’s degree in secondary social studies education and a graduate certificate in teaching academically and intellectually gifted from the University of North Carolina at Charlotte.
The other teachers of the year at each school were Leah Grasty, a second-grade teacher at Forest Park Elementary; Jerold Griggs, a seventh-grade math teacher at Kannapolis Middle; Lisa Gurley, a second-grade teacher at Fred L. Wilson Elementary; Bethany Maycroft, a kindergarten through second-grade special education teacher; Amanda Overcash, a kindergarten teacher at Woodrow Wilson Elementary; and Judith Wherritt, a fourth-grade teacher at Shady Brook Elementary.