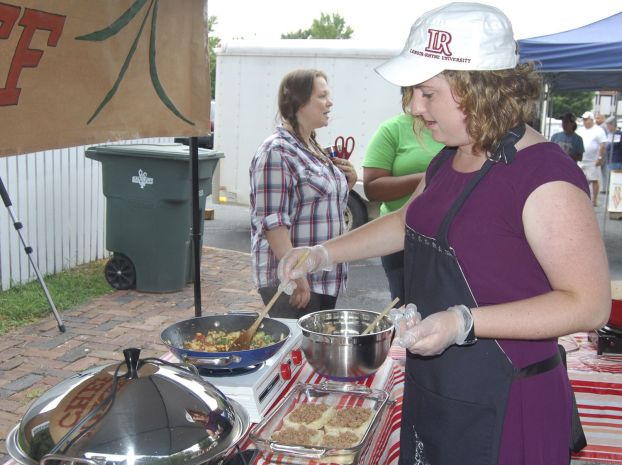 Market Chef finale is all about desserts

As the peak growing season winds down, so does the Market Chef series. This Saturday at 10 a.m. will be the final showdown between two Market Chef competitors. This round is all about desserts and could be the toughest one yet.
Each round has had its own twists and turns; some have been intentional and some accidental. Here is a brief recap of the previous rounds:
Round 1
The first round consisted of two contestants, Becky Ulrich, with partner, Autumn Ulrich, and Quinn Scarvey, with partner, Eli Sherrill. Each contestant had to create an appetizer. They were required to use sweet Italian sausage from Wild Turkey Farms and Tuscan bread from The Bread Basket. They were provided four extra items and had to use three of them. The items included tomatoes from Correll Farms, yellow squash from Eagle Farms, ripe peaches from Peaches and Cream, and cucumbers from Miller Farm. Finally, the contestants used $10 to purchase additional items from the Farmers’ Market. Each created a bruschetta-like recipe. Becky and Autumn Ulrich were crowned the victors of the first round.
Round 2
First round winners Becky and Autumn Ulrich had to face more competitors with the addition of two more teams in the second round, Christine Wilson, with partner Quinn Scarvey, and Penny Collins, with partner Laura Vella. The competition quickly heated up with an additional rule change that only allowed for 10 pantry items. The contestants now had to create an entrée. Each team had to use half of a guinea fowl from Two Pigs Farm and bitter melon from Lee’s Fresh Vegetables and Flowers. The remaining ingredients consisted of hot mustard from the Funky Pepper, a mixture of peppers from Correll Farms, eggplant from Eagle Farm and tomatoes from Miller Farm. This round was cut-throat since appliances had to be shared. Some appliances were even stolen. All three teams worked extremely hard to prepare amazing dishes, but Penny Collins with Laura Vella prevailed as the winners of the second round.
The grand finale is almost here. There is an exciting contest on the Salisbury Farmers’ Market Facebook page to select a surprise judge. If you want to participate, the contest closes today at 4 p.m.
So, what will the grand finale look like? What will the secret ingredients be? Who will be crowned the 2014 Market Chef? I don’t have all the answers. But, I do know this will be challenging, and the desserts will be sweet. Be sure to come out and support your favorite contestants at the Salisbury Farmers’ Market, 115 S. Jackson St.

For more information on the contest, call the Rowan County Cooperative Extension office at 704-216-8970.

The beautiful bounty of summer

You may not be able to tell by the weather, but summer is winding down. All those gorgeous fresh vegetables... read more