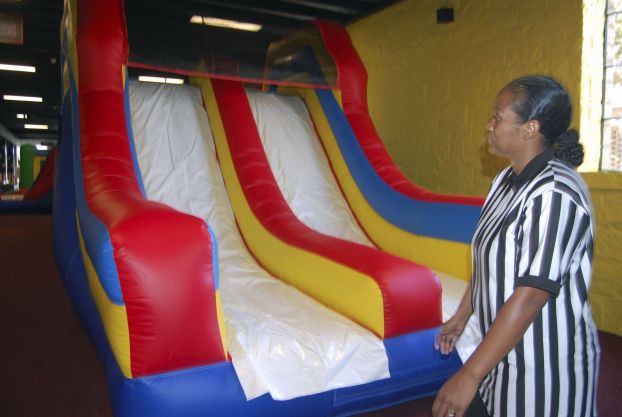 The historic Hedrick Building in downtown Salisbury has been a number of things since it was built in the early 1920s, including a Cadillac dealership, office supply store, a dance studio, karate studio and a gymnastics studio. But it’s never housed an indoor bounce house business – until now.
Bounce City, the first business of its kind in Salisbury, will celebrate its grand opening with a ribbon cutting ceremony today at 11 a.m.
Bounce City, located at 120 N. Church St., in Salisbury, is owned by local couple Guanah and Jehan Davis.
“I’m going to give all the credit to my wife,” Guanah said.
The couple loves to spend time outside and take their children to the park, but they often found themselves driving to Greensboro, Concord or Charlotte on cold or rainy days.
“We needed other options,” he said.
So, the Davis’ decided to create another option.
Bounce City’s walls are brightly colored, and the building is filled with massive inflatable bounce houses for children to play on. Some even include basketball hoops or slides.
There’s a toddler area filled with toys with those that are too small to play on the inflatables.
At the front of the business on one side is a concession stand, which sells ice cream and other goodies.
On the other side is a parent lounge, complete with comfortable chairs, a flat-screen television and complimentary wifi.
The Davises said it’s important for Bounce City to be an enjoyable environment for parents as well.
“We know that children can’t get to Bounce City on their own,” Guanah said.
There’s also a dance floor and Giddy Up rides — moving carts shaped like a variety of cuddly animals.
At the back of the business are brightly decorated party rooms.
“It’s a place where families can have fun and enjoy each other,” Guanah said.
Bounce City’s rates are by the day — $6 for children who can walk up to the age of 3, and $8.50 for children ages 3 and older.
Bounce City also offers party packages, ranging in price from $150 to $375, based on the day of the week, amenities and number of children.
Birthday parties are a “unique, memorable experience,” according to Guanah Davis, and come with invitations, a party planner, decorated room, cake, candles, plates, napkins and thank you notes.
“The only thing parents need to do is show up,” he said.
Bounce City already has roughly 25 birthday parties scheduled for the coming weeks.
Approximately 350 parents and children showed up to Bounce City on Labor Day, which was technically the business’ first day.
Although the business technically opened Monday, the Davises decided they wanted to celebrate their grand opening and ribbon cutting in conjunction with downtown Salisbury’s First Friday.
The Davis’ strategically chose to locate their business downtown because they wanted to drive more traffic and customers to downtown merchants.
The two have successful backgrounds in business. During the day, Jehan works in Bank of America’s default servicing department, and Guanah served as the chief executive officer of the American Red Cross of Massachusetts before moving to North Carolina.
The couple employs 7 staff members, and plans to eventually hire a general manager, but not until they’ve perfected the company’s operations.
Bounce City is located in the showroom of what was Hedrick Motors from the 1920s until the 1960s, and is a part of a larger development called the Hedrick Building.
Above Bounce City are the offices of Hedrick Reality, and beside it are two office or retail spaces and a covered parking area.
Because of the building’s historic nature, historic tax credits were used to renovate the space.
“All these windows were original to the building,” said Gray Stout, the project architect.
Renovations began on the outside of the building. The windows were all repaired and repainted.
Non-original interior walls were removed, and the 22-inch thick granite walls were restored.
New restrooms and a new exit were added, and mechanical, plumbing and electrical systems were installed.
“Everybody worked together as a team,” Stout said. “This was a fun project. Everyone had a great had a great deal of energy.”

‘The Lego Movie’ on tap at City Park Friday night

SALISBURY — The Salisbury Parks and Recreation Department will show “The Lego Movie” Friday night as part of its Movies... read more