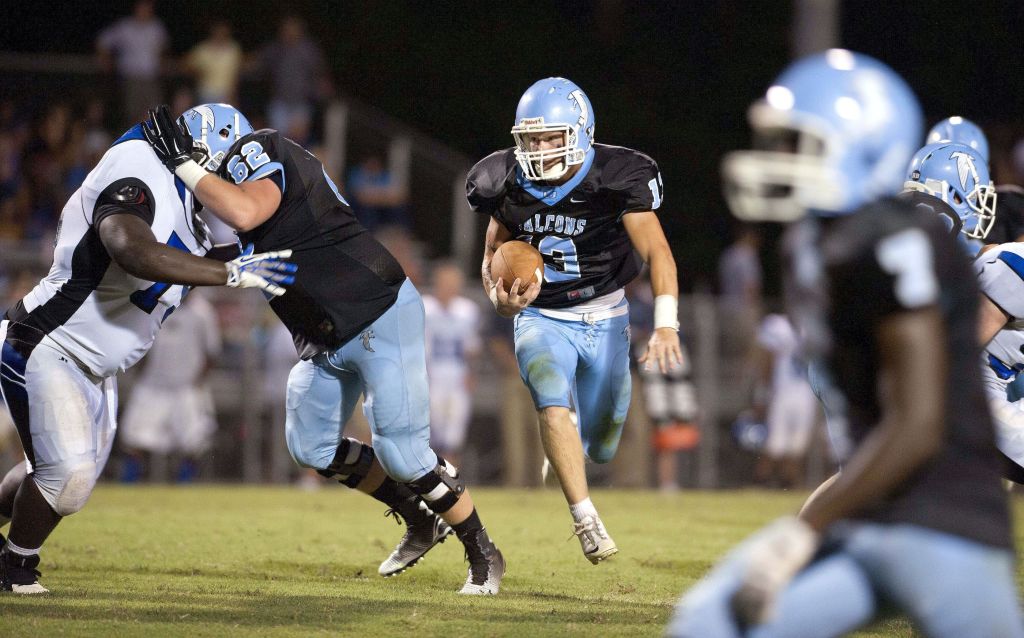 MOUNT ULLA — Coach Scott Young’s offensive system at West Rowan is tailback-friendly.
Four of the top seven rushers in Rowan County history are Falcon tailbacks from Young’s era — K.P. Parks, Dinkin Miller, Wade Moore and Joe Jackson. Three more are in the top 30.
All of them were smart enough to plow behind huge offensive linemen, tough tight ends and unsung fullbacks for methodical gains and all of them were swift enough to break long-distance runs when they found daylight.
“In our system, you put your best athlete at tailback,” Young said. “The next-best athletes go on defense.”
Harrison Baucom is the latest in the train of West Rowan tailbacks. As a senior entrusted with handling that job for the first time, he’s unlikely to make the all-time lists, but the Rowan County rushing race, expected to be a two-man sprint between North Rowan’s Jareke Chambers and Carson’s Brandon Sloop has become at least a three-horse derby.
Baucom’s 114 rushing yards on 20 carries opening night against a stout Mooresville team were impressive. Then his 241 yards on 18 carries in Friday’s 48-36 win at Davie dropped jaws around the county. His three trips to the end zone included breakout runs of 68 and 88 yards.
That’s a county-leading 355 rushing yards in two games, but the thing about Baucom is that tailbacking is only part of his contribution. Young said he’s a great receiver. Baucom caught new quarterback Kacey Otto’s only completion last week for 33 yards.
Baucom also is a Shrine Bowl-level punter. He flipped the field six times Friday, averaging 47 yards per punt.
“Mooresville put a lot of pressure on our punts, but Davie stayed back, and I had plenty of time to put a nice spiral on them,” Baucom said. “They all felt good coming off my foot.”
Baucom kicks off for the Falcons and is a competent placekicker. He was 6 for 7 on PATs against Davie, although he had a good explanation for the miss late in the first half.
“When I caught that pass, I broke my chinstrap, and it ended poking me in the eye,” Baucom said. “I’ve got a black eye now. On that one PAT, I couldn’t see at all. I just sort of swung my foot at the ball.”
Baucom’s dual role as tailback/kicker provides a steady workout. He jokes that it keeps him in shape.
“When he scores a touchdown, he has to sprint to the sideline to get the tee-block to kick the extra point, and then he has to come get a different block to kick off,” Young said. “He’s an old throwback.”
Baucom hasn’t come completely out of nowhere. Young employed Baucom as the Falcons’ quarterback as a junior, a decision that generated ups and downs. He threw four touchdown passes against South Rowan, but a week later, he threw four picks at Carson. By the end of the season, Young was asking Baucom to use his legs more than his arm.
Baucom finished 2013 with a modest 1,034 passing yards, but he added 559 rushing yards. He had more rushing TDs (13) than passing TDs (8). He used his legs to score six times in the Falcons’ last three games.
“As a quarterback, he brought some good things to the table with his athleticism,” Young said. “But we felt like he could help this team more at tailback.”
Baucom found out shortly after last season that he’d be changing positions as a senior.
“At first, I wasn’t sure about it,” he said. “But I love tailback. As a quarterback, there are so many things you’ve got to think about, different reads you’ve got to make. Tailback is easier — just make the right cut. It’s so simple now.”
It’s not as simple as he’s making it look, but he’s making himself a recruitable commodity in football as well as baseball. He’s started in the outfield the last two summers for Rowan County American Legion.
“Football or baseball is kind of the million-dollar question,” he said with a laugh. “During football season, I miss baseball, and during baseball season, I miss football. I have no idea what will happen.”