Obama calls Ukraine ‘a moment of testing’ for West 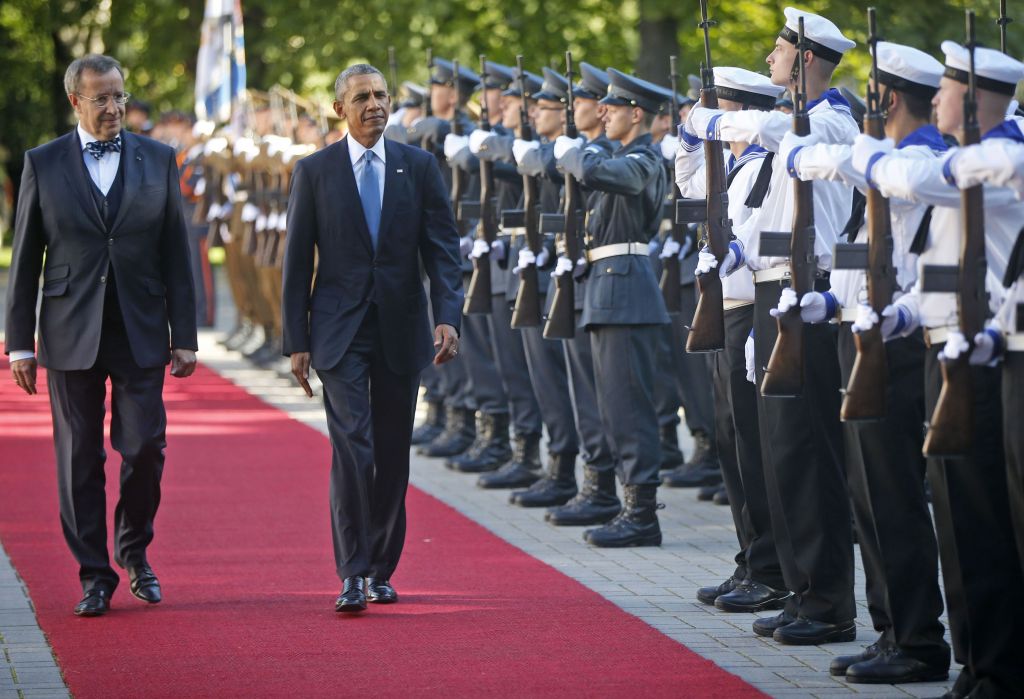 TALLINN, Estonia (AP) — President Barack Obama on Wednesday harshly condemned Russian aggression in Ukraine as a threat to peace in Europe and pledged that NATO will protect allies who fear they will be Moscow’s next target. Standing on Russia’s doorstep, Obama declared “this is a moment of testing” for the Western alliance to stand up to the Kremlin.
At the same time, the Pentagon announced that 200 U.S. soldiers would participate in an exercise in western Ukraine starting next week. Though largely a symbolic move, distant from the conflict with Russian-backed separatists, it would mark the first presence of American ground troops in Ukraine since the crisis began.
Obama’s tough words set the stage for a pivotal summit of the 28-nation NATO alliance beginning today in Wales. For years, Moscow seethed as NATO expanded its membership and pushed its reach to Russia’s borders, encompassing former republics of the Soviet Union. The backlash from Moscow was a long time coming, but now Vladimir Putin seems determined to assert Russia’s role as a great power.
Obama offered no new prescriptions for solving the central conflict that has put Eastern Europe on edge: Russia’s months-long incursion in Ukraine. Multiple rounds of U.S. and European economic sanctions have done little to shift Putin’s tactics, and Obama remains staunchly opposed to U.S. military intervention. Unlike the Baltics and other Eastern European nations, Ukraine is not a member of NATO, meaning the U.S. and other allies have no treaty obligation to come to its defense.
Following Obama’s remarks in Estonia, Putin spelled out a seven-point plan for ending hostilities in eastern Ukraine. The Russian leader said the rebels should halt their offensive and the Ukrainian government forces should pull back to a distance that would make it impossible for them to use artillery and rockets against residential areas.
Ukrainian President Petro Poroshenko’s office said he was indeed working with Putin on a cease-fire. But Western leaders were skeptical, noting it wasn’t the first attempt to halt the deadly conflict.
Poroshenko is to meet with Obama and European leaders today on the sidelines of the NATO summit.
The West’s inability so far to stem the crisis has compounded fears in Eastern Europe that Putin could feel emboldened to make moves in other former Soviet territories. White House officials said Obama’s visit to Tallinn was meant to both reassure Baltic leaders that the U.S. would defend their sovereignty if that happened and to warn Putin that he would be risking a confrontation with the American military should he move in that direction.
“We will defend our NATO allies — every ally,” Obama said in a speech to young people as well as political and civil leaders. “In this alliance, there are no old members or new members, no senior partners or junior partners — there are just allies, pure and simple. And we will defend the territorial integrity of every single one. “
In response to the Ukraine crisis, the U.S. will contribute troops and equipment to a rapid response force in Eastern Europe that would be able to deploy within 48 hours.
NATO has already stepped up its air, land and sea rotations in the region. And Obama announced Wednesday that he would send more Air Force units and aircraft to the Baltics, likely to Estonia’s Amari Air Base.
The three Baltic nations — Estonia, Latvia and Lithuania — have long had an affinity for the U.S., which never recognized the Soviet Union’s nearly five-decade occupation of their territories. After the Soviet Union disintegrated, the Baltics turned to the West and joined the European Union and NATO in 2004, much to the chagrin of Russia.
The leaders of Latvia and Lithuania traveled to Estonia Wednesday to meet with Obama. While they welcomed U.S. commitments to the region, they pressed for more, including permanent NATO bases near their borders.
Other alliance members are loath to take that step because of a 1997 agreement with the Kremlin in which NATO said it would not have a permanent troop presence of a significant size on Russia’s border.
Estonian President Toomas Hendrick Ilves said NATO should have the flexibility to sidestep the agreement because security conditions have shifted drastically since its signing.
“I would argue this is an unforeseen and new security environment,” said Ilves, who grew up in the United States. “It does not mean we have to give up the whole act, but certainly when an agreement in certain parts no longer holds, well, then it’s time to make a change.”