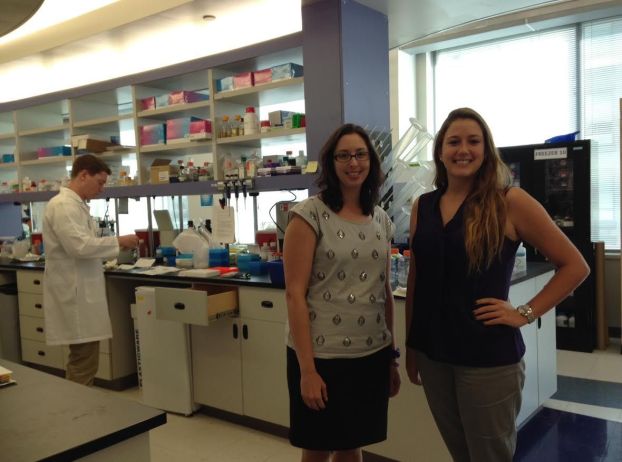 The ALS Ice Bucket Challenge that’s still sweeping the country has a Catawba College connection. Leah Ryan, a 2014 alumna of Catawba College and the development coordinator on the brands promotion team at ALS Therapy Development Institute in Cambridge, Mass., has helped manage the success that the innovative challenge has wrought.
Ryan, who hails from Westborough, Mass., began her job at ALS TDI in June and has witnessed, with her coworkers, the power of social media.
“We can’t even track (all of the challenges issued and taken) at this point because there are so many,” Ryan explains.
But the funds that the Ice Bucket Challenge has generated for ALS TDI, a nonprofit biotech established in 1999, are trackable. According to Jessica Sullivan, senior director of communications at ALS TDI, $3 million had been raised in the four weeks since the challenge was launched.
“Ninety percent of all the donations have come in through our website and we’ve been sharing that link on social media — www.als.net/icebucketchallenge,” Sullivan said.
Sullivan notes that the monies raised thus far represent almost 20 percent of the nonprofit’s annual operating budget.
“ALS was not widely known when this (Ice Bucket Challenge) started, but it’s amazing how many people can get on board and care when presented with a powerful cause,” Sullivan says. “Facebook and Twitter are the main drivers of awareness and donations.”
The Ice Bucket Challenge has been used to raise awareness and funds for other charities before, but it was Young Faces of ALS ambassadors Pat Quinn and Pete Frates whose brainchild it was to use it specifically for ALS. The two used their Facebook pages — TeamFrateTrain and QuinnForTheWin — to initiate the online challenge, with Quinn initially challenging Frates.
“We basically knew when our Facebook newsfeeds were crammed full of videos and donations began pouring in that we had something special. It’s heightening awareness and it’s fun,” Sullivan said.
Ryan, who earned her bachelor’s degree in psychology with a business administration minor from Catawba, says she’s pleased to be working in such “an amazing environment.”
“I wanted to work for a nonprofit. When I came to interview, I thought, I need to get this job. I need to work here,” Ryan remembers. “I’m actually really glad I didn’t have a job when I graduated in May or else I wouldn’t have been able to interview with ALS TDI. Sometimes you feel desperate to get your foot in the door and feel like you have to take something quickly. But I’d say, ‘Be patient, and don’t settle.’
“I do feel like I am making a difference and I’m glad I didn’t settle.”
Sullivan, whose career path to ALS TDI was similar to Ryan’s, also joined the nonprofit as an intern out of college.
“It wasn’t my cause when I began, but over the last six years, it has become my cause and I don’t intend to give up until we have a treatment,” she said.
“We’re very lucky to have Leah,” Sullivan said. “We all knew it when she walked out of the interview — she was the right candidate.”
Sullivan and Ryan say ALS TDI will continue to carry on even after the Ice Bucket Challenge stops dominating social media and making news headlines.
“We’re absolutely going to carry on,” Sullivan says. “We’re working on a lot of events with our families, and we host an international scientific research conference in November. We have a plan on how we’re going to immediately invest the money raised from the Ice Bucket Challenge in our research programs to move quicker than ever to end ALS.”
As for Ryan, after the excitement generated during her second month on the job, she can hardly wait for the next wave of excitement that she is sure will come.