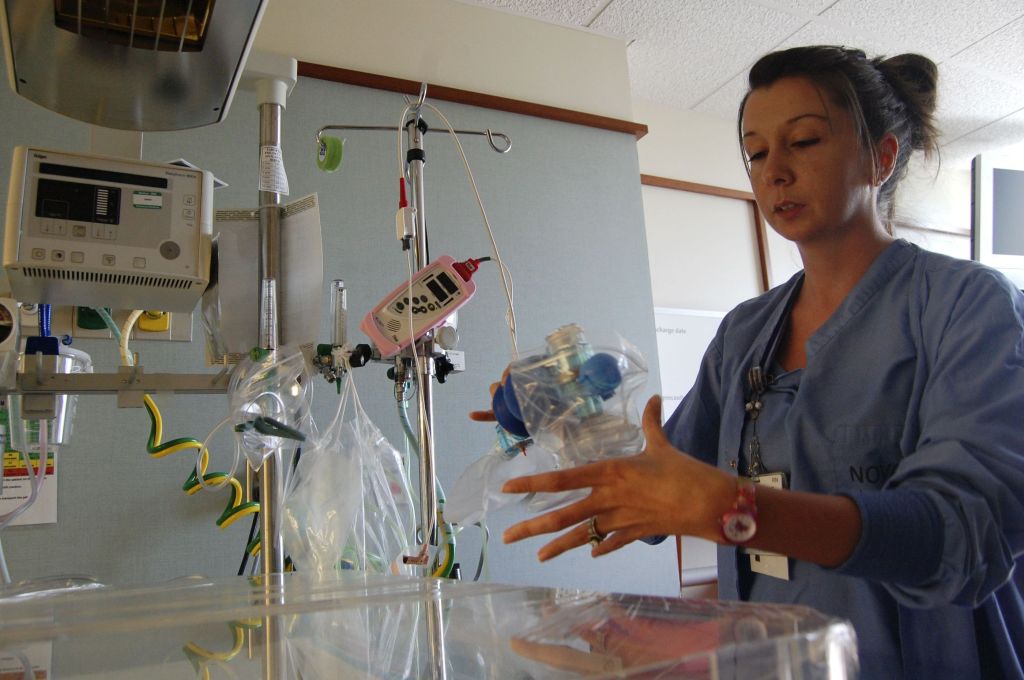 Expectant mothers took Labor Day off, but Monday was just the start of another work week for two nurses and a doctor at Rowan Medical Center.
Dr. Michael Mills, Danielle Crack and Hannah Barnhardt all spent their holiday in the hospital’s labor and delivery department.
In 2013, more than 700 babies were born at Novant Health Rowan Medical Center, averaging out to about two per day. Though the hospital didn’t welcome any new Rowan County residents into the world Monday, Mills, who works at Salisbury OB/GYN, said it only takes a split second before the labor and delivery department is bustling with activity.
“It’s not unheard of to have three or four people come in within an hour,” Mills said. “It can get pretty hectic.”
At its busiest, Crack said, she’s gone to get a patient and passed a second one who was traveling up on the hospital’s elevator.
There isn’t much of a pre-determined schedule for labor and delivery personnel, Mills said. At times, he said, it’s a fast-paced environment, but Monday was clearly the opposite. He said it’s important to keep each patient’s condition in mind when things pick up.
“You have to prioritize what you need to do,” he said. “You’ve got to be there when they are ready to have a baby, and that’s not something you can turn your back on when someone is just having a few contractions.”
Regardless of the work pace, all three said the joy of delivering a baby was too good to pass up when making a career choice.
“It’s witnessing a miracle,” Crack said. “Once I did my (obstetrics) rotation, I was in love and I knew that’s what I wanted.”
But it’s more than simply a workplace for Crack. Rowan Medical Center is actually her birthplace.
“It’s come full circle,” she joked.
Barnhardt initially started out in telemetry nurse, but later had a chance to transition. Her choices were intensive care or labor and delivery. After choosing labor and delivery, Barnhardt, likewise, fell in love.
“I like being able to interact with and take care of families rather than one sick patient,” she said.
Besides the joy of delivering a baby, Mills said his experience in third-year rotations played a role in his decision to specialize in obstetrics and gynecology. He received his undergraduate degree from the University of North Carolina at Chapel Hill and his medical degree from Wake Forest,
“The residents were very excited about teaching and the physicians were very good,” he said. “Once I did it I was hooked.”
Though he delivers babies regularly, Mills doesn’t have any children of his own.
“I have two cats,” he joked.
Crack and Barnhardt said fathers are universally nervous when coming into labor and delivery with an expecting mother.
“Sometimes they don’t know what to do,” Crack said.
Brothers and sisters, on the other hand, are usually curious, Crack said.
“They run around and look at the baby or they might want to poke it,” she said. “It’s fun to watch them. Sometimes they call it their baby.”
As the trio of medical professionals waiting for a Labor Day baby, Mills said labor and delivery remains among the most important departments in the hospital.
“There’s no other unit in the hospital and no other nurses in the hospital that can do what these nurses do for these patients,” he said.
Contact reporter Josh Bergeron at 704-797-4246