A new day at South 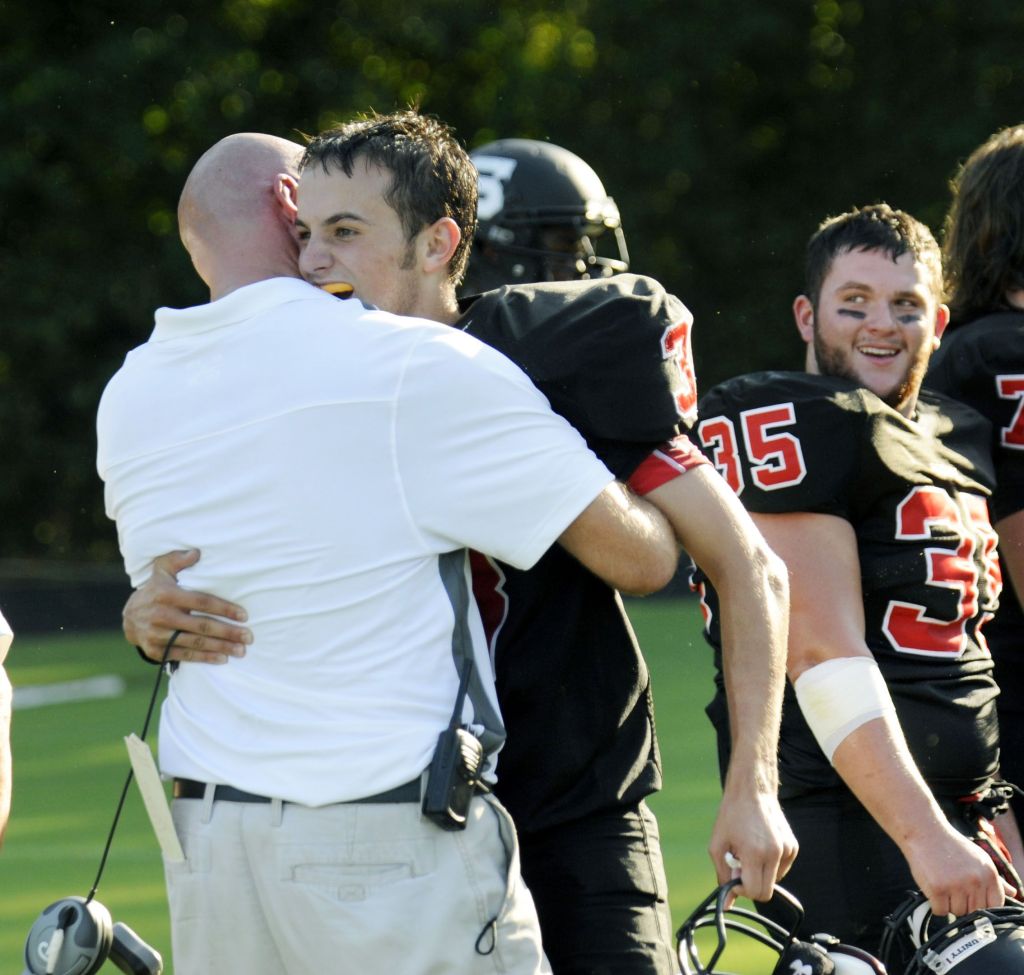 LANDIS–The 2013 season in Landis was a bad one. It actually goes down as the worst football season in South Rowan history.
The Raiders went 0-11. In those 11 losses, they surrendered more points than any other team in the history of high school football in Rowan County.
“I think last year was one of those years. It was probably one of the lowest points as far as focusing on getting that win,” head coach Jason Rollins said. “But at the same time, I thought our kids had a positive outlook every week.”
As soon as the curtain dropped on that campaign, that season was done. It became nothing more than a memory for Rollins and the Raiders. They were looking forward instead of looking backward.
“The team aspect, once that final second went off, it was a new day and a new era and we’re looking to change it,” starting quarterback Aaron Kennerly said.
Changing the dynamic started in winter. The team began lifting weights after the start of the new calendar year. Linebacker Burke Fulcher said players were back on the field going through workouts at the beginning of spring.
That new outlook, however, could not have come without a look at the old way.
“As much as people may look at it and go, ‘How can last year help?’ Last year helped us see, especially for our kids, what our expectations are,” Rollins said. “[It’s] in the weight room, especially our speed and agility, because Xs and Os will come. That is something that in game situations, that’ll happen and when you start practicing in August and even late July. But for us, the biggest thing was weight room and speed. And we did that.
“I think that’s what last year did to help us into this year.”
The weight room was a big part of the transition to what the Raiders hope turns into an era of maintained success. Rollins said an average of 30-35 kids participated in the regular offseason workouts. Thursday, varsity players were scheduled to hit the weights after going through a light practice ahead of Friday’s game at A.L. Brown.
A bond formed among the players during those offseason workouts. With that came motivation and determination to avoid a regression into the old way.
“We’ve come together and said we’re not going to go through the motions,” Kennerly said.
Kennerly was one of a handful of guys who led the charge in the new way. Seniors Alex Parham, Tyler Karriker and Burke Fulcher were there to get people on board as well.
“They kept pushing it and pushing it and helping us as coaches,” Rollins said. “…They just continued to stay on the kids the we were trying to get in the school, saying, ‘Hey. We need you. We need you.’ Peer pressure sometimes is your best advantage in that — positive peer pressure — and that helped us.”
It paid off in the season opener against South Iredell. The game was not pretty. Still, the Raiders were able to grind out a 31-21 victory and snap a 14-game losing streak, the longest in school history.
How it plays out going forward has yet to be seen.
In keeping with the new-era, new-day theme, the Raiders did not dwell on their success from last week. Kennerly said the spirits were high Saturday in the locker room. There was hooting and hollering and high fives. Then it was over.
It was back to business Monday. And there is a road game Friday at A.L. Brown.
“Saturday’s win was big for us, but we got to put in more work this week because we have tough competition against Kannapolis,” Fulcher said.
Follow Adam Houston on Twitter at @AdamRHouston.