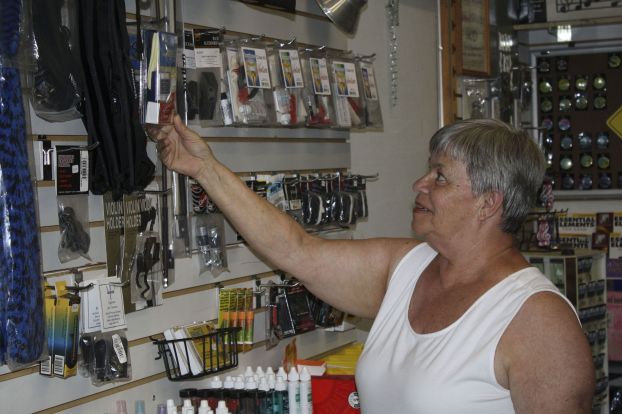 CLEVELAND — Rowdy Cannaday was tired of driving out of town just to find valve oil for his trumpet.
So when he lost his job in the racing industry during widespread layoffs, Cannaday decided to use the skills he learned while growing up in his father’s music store to open his own shop in western Rowan County.
Now, he just has to walk out his back door for valve oil. High Note Music at 275 Bear Poplar Road has sold and rented school band instruments for four years.
Cannaday and his wife Diane own and operate the shop, one of three places in Rowan County that both professional musicians and parents of budding music students can find what they need. The Band Attic in Spencer and Guitars USA in Salisbury are new, and Music N’ More has shops that rent and sell band instruments in Concord and Mooresville.
High Note is open from 4 to 8 p.m. Monday through Thursday, with weekend appointments available by calling 704-278-0803 or emailing the shop through its website, www.highnotemusic.org. Emergency repairs are available at other times, and Cannaday prides himself on one of the fastest repair services around, often while the customer waits.
Cannaday grew up in a musical family and learned how to repair instruments while working in his dad’s store in Virginia. He moved to Cleveland 18 years ago and worked as a crew member for several NASCAR teams. A fuel man, he was injured on the job and then laid off in 2007.
While Cannaday was unemployed, his father sent him a set of instrument repair tools and a basic start-up inventory and put him in touch with an instrument rental company. Cannaday began talking to school band directors and set up shop behind his house.
Now a full-time employee at the Freightliner plant in Cleveland, Cannaday handles instruments for West Rowan Middle School and recently completed reconditioning Catawba College’s marching band instruments.
Business has increased every year he’s been open, and Cannaday said eventually he would like to have a storefront.
“We are growing each year, but I prefer to stay small,” he said. “Slow growth builds longevity.”
Customers come from as far away as High Point and Greensboro, and High Note has rented to musicians in South Carolina.
“I’ve been a mechanic for most of my life, and tinkering on horns in my younger years was something to help out,” Cannaday said. “I never considered doing it for a living.”