Blaney gets by Kyle Busch 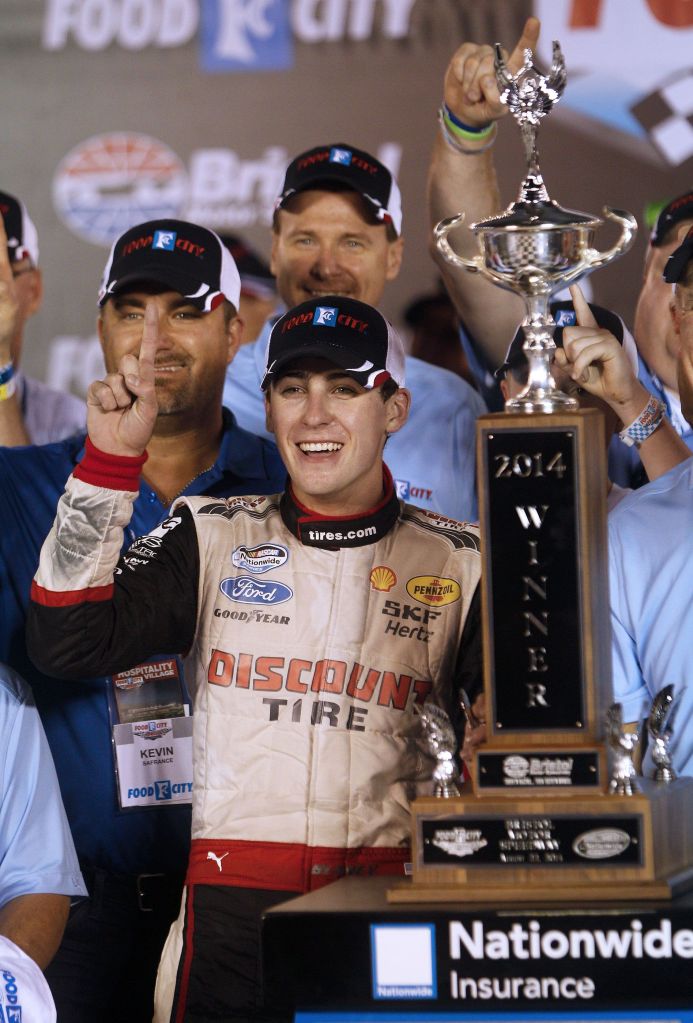 BRISTOL, Tenn. (AP) — Ryan Blaney bolted past Kyle Busch on a restart with six laps remaining and won Friday’s NASCAR Nationwide Series race at Bristol Motor Speedway for his second career victory.
It was a surprising finish after Busch, seeking to become the first driver to win four consecutive races in the series on the 0.533-mile oval, had dominated for much of night, especially on restarts.
Battling at various times against the youngest and brightest stars in the series, Busch generally made quick work of them. He led 161 of the 300 laps and seemed poised for his record 67th victory in the series.
But on the final restart, he was holding back, as was his prerogative as the leader, until Blaney suddenly darted to the lead from the inside line, cleared Busch’s car and sailed off to the victory.
“Kyle didn’t go on that last restart,” Blaney said, referring to the marked area on the track wall inside which the leader is supposed to accelerate, with the rest of the field following his lead.
“He said his tires were jacked up and we got to the second line and we just went,” Blaney said.
Busch managed to get close to Blaney’s bumper, but that was it.
“I was driving my guts out trying to stay ahead of him,” Blaney said.
Busch, meanwhile, seethed like he had something taken away from him.
“My rear tires weren’t on the race track and I couldn’t accelerate,” he said, suggesting Regan Smith, restarting behind him, had lifted Busch’s car off the track to eliminate his traction.
“NASCAR doesn’t police it and so everybody keeps jacking around on it and one of these days I’m just going to lock all four (tires) down and stack the whole field up,” Busch said.
Chase Elliott, who finished third, saw it differently.
“I saw Kyle make a rare mistake,” Elliott said, adding that Busch was spinning his tires.
Elliott finished third and remained the series leader by 13 points over Smith.
Ty Dillon finished fourth, followed by Smith.
The night began with a 1 hour, 20 minute rain delay after a shower arrived just after driver introductions. The last half of the race was run with teams watching radar as a storm moved in, and it was a total washout for Elliott Sadler, too.
The Virginia native began the night third in points and seeking his third Nationwide victory on the track that bills itself “the world’s fastest half-mile.” Sadler was running in the top five until his problems began.
He was involved in three of the night’s 10 caution flags, the first after an accident with Timmy Hill, and limped to the finish in 29th place. He fell from 16 points off the lead to 42 behind.
Earlier, Kyle Larson and Busch dueled extensively, and Larson was the only one able to get the better of Busch, until Blaney slipped into him and Larson spun into the wall, ruining his night.
“I thought he was just going to chase me to the top, but instead he ran us into the wall,” Larson said. “I know Ryan’s a good kid. It’s just frustrating. It’s Bristol. It’s just short-track racing.”
Larson wound up 26th despite leading 46 laps.
—
Follow Hank on twitter at: http://twitter.com/hankkurzjr