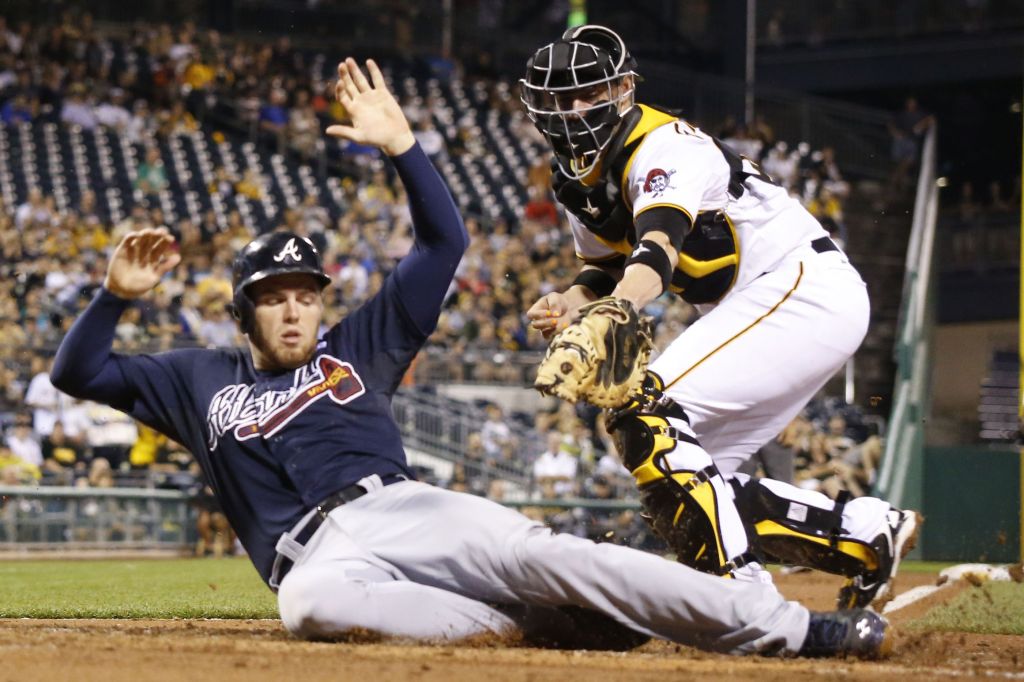 Associated Press
PITTSBURGH (AP) — The Pittsburgh Pirates were looking for a way to break their seven-game losing skid.
They got a little help when Justin Upton dropped a routine fly ball to left-centerfield in the ninth which set the stage for Gaby Sanchez’s game-winning sacrifice fly that capped a late-inning comeback as the Pittsburgh Pirates defeated the Atlanta Braves 3-2 on Wednesday night.

"We try to pride ourselves on not being surprised by success," manager Clint Hurdle said. "To get the two to tie it up then some help and to win, yeah, it’s a real nice shot in the arm."

David Carpenter (4-4) took the loss after allowing an unearned run to cross. Jordy Mercer led off with a single and Starling Marte’s fly ball to left-center advanced him to third, where Mercer tagged up on Sanchez’s flyout.

"We make that play 99 1-2 out of 100 times," Atlanta manager Fredi Gonzalez said about the outfield error.

The Pirates now have 32 comeback wins in 2014, accounting for nearly half of their 65 wins overall.

"We don’t ever feel like we’re down." Sanchez said. "It doesn’t matter if we’re down by four or five. We can still come back and win a ball game."

Upton drove in a run with a single in the first inning after Jason Heyward walked and Freddie Freeman singled. Upton’s single extended his hitting streak to 11 games.

After allowing a double to Evan Gattis leading off the second, Pittsburgh right-hander Gerrit Cole retired the next 12 batters he faced before Heyward singled in the sixth.

Heyward scored again on a RBI single by Chris Johnson for a 2-0 Atlanta lead, and finished 1 for 3 with a walk and two runs scored.

Josh Harrison led off the first with a double, but was picked off by Atlanta left-hander Alex Wood. He was ruled out on a replay-review that overturned a safe call on Alex Wood’s throw over.

Pittsburgh didn’t place another man in scoring position until the eighth inning when Wood issued a walk to Sanchez and Travis Snider doubled before Wood recorded an out.

Jordan Walden entered and allowed each of his inherited runners to score. Chris Stewart brought Sanchez home with a RBI groundout to first base and Snider scored on a wild pitch as Walden walked Neil Walker.

Snider was the only player with a multi-hit game, going 2 for 3 and extending his hitting streak to 11 games.

Cole lasted through seven and gave up two runs, five hits and four walks and struck out six in his first start since July 4.

"The location certainly got better as the game went on," Cole said. "We were just able to put our foot down when we needed to and to come back and grab a couple runs at the end was big."

Braves: SS Andrelton Simmons (hip) started for the Braves after he was removed from Tuesday’s game. … RHP Shae Simmons (right shoulder soreness) is shut down for the near future after he felt soreness following his second rehab outing with Triple-A Gwinnett.

Pirates: RHP Charlie Morton (hip) says his injury is a sports hernia. He was placed on the disabled list Monday, retroactive to Aug. 16, with what the team called right hip inflammation. Hurdle said the plan is to "try to calm the hip down." Morton will likely see a doctor soon and a return-to-pitch program for this season is still a possibility.

Braves: Atlanta continues its road trip with a three-game series at Great American Ballpark against the Cincinnati Reds. RHP Julio Teheran (11-9, 3.06 ERA looks for his first career win against the Reds and LHP David Holmberg (0-0, 16.88 ERA)

Pirates: Pittsburgh receives an off-day Thursday as the Pirates travel to Milwaukee for a three-game set over the weekend with their division-rival Brewers. LHP Jeff Locke (4-3, 3.73 ERA) matches up with RHP Yovani Gallardo (8-6, 3.32 ERA) Friday night, who Locke previously lost a decision to June 8 at PNC Park when the Brewers won 1-0.