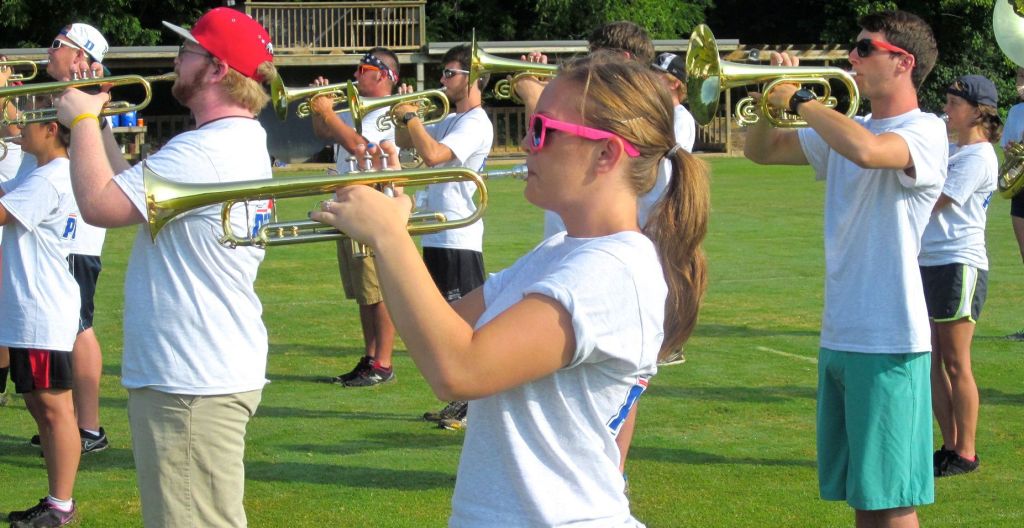 This academic year will mark the fourth year since Catawba College resurrected its marching band, and by all accounts and sounds, it is thriving, helping to recruit prospective students and roust football fans at home games.
The band, the Catawba Pride, cranked up in fall 2011 after a 37-year marching band hiatus at the college.
“One of the coolest things was to be in the band when it first restarted and to see the program grow,” Ryn Crawford, a drum major and senior from Concord, shared at a recent band camp practice.
“This year, there are as many new performers as returning performers,” Crawford said.
Crawford, who played in the marching band at J.M. Robinson High School in Concord, participated in marching band competitions and a drum major camp on the Catawba campus while in high school.
She wanted to major in occupational therapy, but discovered instead Catawba’s therapeutic recreation major, which she explained, “could be the base for my graduate work in occupational therapy.”
“Everything sort of fell into place,” Crawford said. “I just loved the campus and felt like this was the place I needed to be.”
It was the marching band that also lured Mitch Baker, a first year student from Crawford’s high school, to Catawba. He plans to major in music education.
“It’s a lot more in-depth and people seem friendlier than they were in my high school,” Baker confided about the difficulty level of the half-time show and his fellow band members.
Regarding the band’s half-time show this season, he added, “Folks are in for a treat. This is a very energetic show and will get them pumped up for the next half of the football game.”
“This is the first year I don’t have to teach (my fellow band members) that much,” senior Zack Veitenheimer said. “The talent has skyrocketed since my freshman year. We’ve seen the Catawba Pride grow up.”
Growing a program “was part of the attraction” to Catawba, added senior Chris Money.
While the Catawba Pride is under the direction of Dr. Stephen Etters, an assistant professor of music at the college, he shares responsibility for the band with all of its members. Each of the students in the band has areas they oversee.
Veitenheimer is responsible for the marching and visual aspects of the wind players, while Money is charged with logistics for the band. Yet another student helps take care of the band’s uniforms.
Etters said the Catawba Pride “is thriving” and this year’s band “is the best we’ve had.” The band’s halftime routine will feature “Cirque du Soleil” music and visual elements.
“Each song has a different timbre and style and lends itself to telling the story of the journey of man,” Etters noted. “It will be just as visual as it is musical and incorporates dancers from our campus, a juggler and even a contortionist. It has much more of an international flair to it with visual surprises.”
“I like the music a lot and the creativity it inspires,” said senior Chelsea Retalic, one of the band’s two color guard leaders. “We’ve never worked with props before, but will have the opportunity to in this show. There will be giant panels, boxes and giant parachutes that will serve to illustrate the difference between appearance and reality.”
Retalic actually helped sew the flags used by the color guard in this year’s show.
Devan Purvis, the band’s other color guard leader, said she would be playing the role of the ringleader during the show, while Retalic will act as the main jester.
The Catawba Pride will perform its halftime show during Catawba’s first home game against Carson-Newman, slated for 1:30 p.m. on Sept. 27 in Shuford Stadium. The Pride’s fellow students, families and members of the college and Rowan-Salisbury communities can preview the performance during a pep rally to be held under the lights in Shuford Stadium beginning at 8 p.m. on Friday, Sept. 26. That pep rally, which kicks off Family Weekend, is free and open to the public.