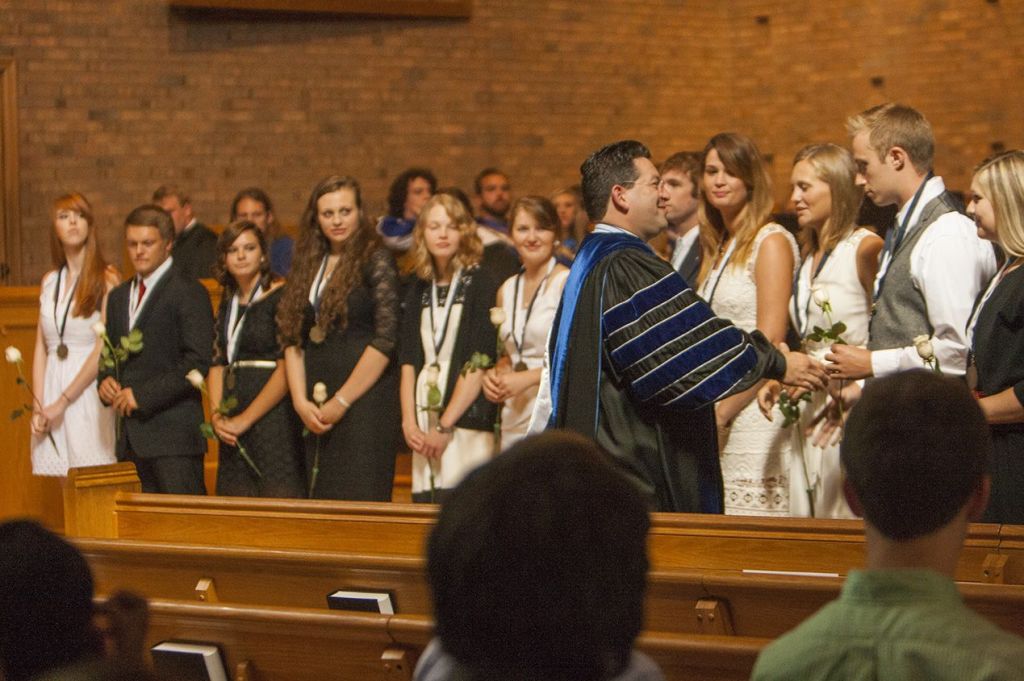 A different sort of opening convocation helped kick off Catawba College’s new academic year on Tuesday. A ceremony in the 50-year-old Omwake-Dearborn Chapel had the pomp and circumstance associated with academic beginnings, followed by a club fair and a community picnic supper in the 50-year-old Robertson College-Community Center that offered new and returning college community members opportunities to socialize and interact.
Catawba’s opening convocation has traditionally been held two weeks into the academic year, but this year’s convocation was scheduled the day before the start of classes on Wednesday. At the convocation, new students (first-year and transfers) began a new tradition by acknowledging their entrance into the college community and their responsibilities to abide by and uphold the community’s code of conduct by signing into large registries.
Catawba’s Provost Dr. J. Michael Bitzer described the significance of the signing like this: “Catawba’s Honor Code represents a statement of values that undergirds the educational experience in our community. The community has traditionally repeated the Honor Code together; this year, we are creating a new tradition, not just through speaking, but through the signing of the Honor Code.
“The signing represents more than just the repetition of words, but the pledging, in your name, to uphold the values that Catawba respects and that are represented in our Honor Code. Much like at institutions of higher education across the country, Catawba places the responsibility to act honorably on each of us in all relationships and activities within our community.”
Bitzer also shared information with those gathered about a new campus initiative, a quality enhancement plan called “Catawba to Career” or C2C. He described this as a “new tradition in Catawba education” which “has a direct connection to the value that you will find in the first sentence of the college’s mission statement. In that sentence, Catawba College pledges to ‘provide an education rich in personal attention,’ and that ‘blends the competencies of liberal studies with career preparation.’ ”
C2C will focus on developing career awareness for students, he said, and advised that over the next few weeks, “a series of town-hall meetings will be held for students, staff and faculty to share reaction and feedback, along with meetings with specific groups.”
Catawba President Brien Lewis convened the college for its 164th year of operation. Junior marshals from the traditional day program were installed, as were members of the Student Government Association’s executive board. Representatives from the college board of trustees, the Staff Council, the Faculty Senate and the Student Government Association brought greetings and shared brief remarks.
Bill Graham, vice chairman of the board of trustees, shared this advice: “Freshmen, get going, and seniors, this is your last time around — make it count!”
The community picnic supper that followed was sponsored by Wells Fargo.