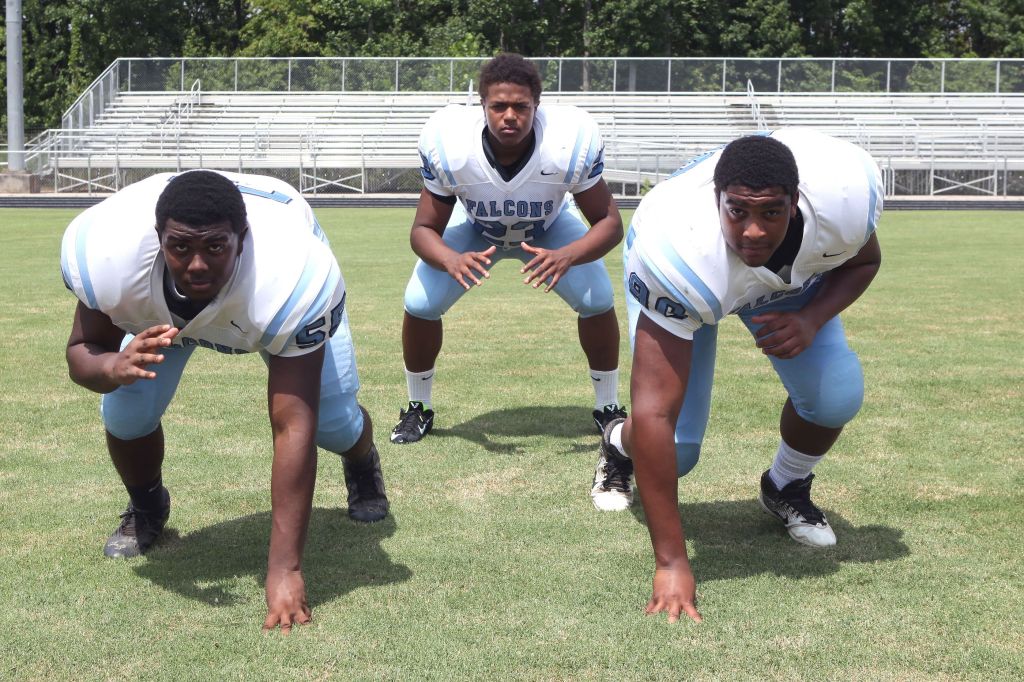 MOUNT ULLA — It is way too soon to affix the Scott Young Seal of Approval on this year’s West Rowan football team, but there’s much to like here.
For starters, the Falcons appear to have put last season’s 6-6 misadventure precisely where it belongs — in the rearview mirror. That’s important.
“Fortunately we’ve been ranked one of the state’s top five programs over the past 10 years,” Young said following a recent practice. “So last year, while some teams tried to go 6-5 and make the playoffs, we tried to avoid that embarrassment. I’m proud of our program and all we’ve achieved, but I do believe last year’s team underachieved terribly.”
He’s not alone. Listen to left tackle Jacob Radtke, one of four seniors who will comprise West’s beefy offensive line: “We had some character issues that had to be fixed. That team didn’t have chemistry and it just never jelled.”
Junior linebacker Dearius Phillips, a returning starter, offered the boldest assessment. “If we had played just a little bit harder, we would have been all right,” he noted. “We had the lead in every game we lost, but in the fourth quarter everybody put their heads down. We’re not going to do that anymore.”
Against that backdrop the Falcons unveil a new flight plan, one they expect will lead them deeper than the first round of the 3A state playoffs, where the 2013 squad checked out following a 28-7 at South Point. Young and his staff, which includes former tight end Patrick Hampton coaching the OL, have high hopes. “We’ve got tremendous size, everywhere,” Young said. “We’re big, big compared to any high school football team.”
It starts with the team’s meat section — its offensive line, anchored by Radtke (6-4, 240) and junior right tackle Hezikiah Banks (6-4, 295). Radtke, a third-year lettermen, is the line’s anointed communicator, while Banks is surprisingly athletic for his size. Joining them are senior guards Hunter Mesimer (6-0, 275) and Denny Triche (6-1, 230) and center Marshall Ball (5-7, 260). Backups include senior Cody Stewart (6-2, 220), juniors Shane Barber (6-0, 270), Caleb Johnson (6-4, 275), Dillon Bragg (6-2, 315), Josh Wright (5-11, 180), and sophomore Javon Lofton (5-11, 200).
“That line will be a key,” Young said. “It probably will determine how successful we are.”
West will run a Multiple-I offense and hand the keys to junior quarterback Kacey Otto, a starting fullback last year. In a mid-month scrimmage against Charlotte Catholic, West’s passing game never got untracked. “Our running game looked fantastic,” Young said. “We messed up when we passed the ball. (Otto) shows flashes of brilliance, then makes mistakes we need to correct. We hope he develops into a steady, smart decision-making quarterback.”
The backfield features last year’s QB, Harrison Baucom. Now a senior running back with great hands, he’s a dynamic playmaker who switched positions to draw attention from college programs. He’ll be joined by a couple of jayvee graduates — the physical L.J. Robinson and explosive sophomore Jovon Quarles. Hard-nosed seniors Daniel Flanagan and Jake Haire, both returning lettermen, will split a timeshare at fullback. Junior Clifton Welch (6-4, 225), a move-in from South Rowan, is penciled in at tight end. West’s stable of wide receivers include starters Shakir Simmons and Kortez Weeks, along with backups Juwan Houston, Andre Reid, Hunter Bernhardt, Corbin Benton and first-year senior Khalick Caldwell. Junior Ryan Younce will return from a leg injury in October.
Baucom will also serve as a punter/kicker. Weeks and J.T. Sanders will return punts and Quarles and Amos Duncan will run back kickoffs. “We needed some changes and we’re making them, “ Banks said. “We’ve got a lot more leadership on offense. Everybody understands what everybody else is doing. Stronger communication, that’s been the key so far.”
Defensive co-ordinator Lee Linville has his work cut out for him. While the OL is stocked with pound signs, the five-man defensive line includes a few question marks. There’s senior DT Darius Williamson (6-2, 270) — a 72-point headline waiting to happen — but uncertainty elsewhere. Junior tackle Justin Evans (6-1, 250) will learn on-the-job while defensive ends Derrick Moreland (6-2, 275) and Amara Morris (6-1, 185) will rely on quickness. Senior Jalen Norman (5-9, 300) is the starting nose guard with juniors Craig Mattison (6-1, 275) and Jonathan Johnson (5-10, 210) available for relief appearances. Lontee Pressley and Austin Flynn complete the trench corps. “Their size and strength is impressive,” Linville said. “But they’ve got to be a little more aggressive. They need more fire in their belly.”
West will employ only two linebackers — junior Dearius Phillips and senior Owen Harrison. Phillips (6-1, 230), a returning starter, is big, fast and almost famous. “He’s getting better mentally,” said Linville. “He already has all the physical tools, but he’s going to grow into a leader.”
Harrison (5-10, 170) is a smart player, though undersized. Reserve linebackers include juniors Noah Williams and Kreshan Alexander.
West’s secondary is a primary concern. Sanders, a junior who played for the junior varsity last autumn, steps in as a starting cornerback opposite senior Kevin Galliard, a 2013 varsity reserve. First off the bench is sophomore Daquan Byrd. The safety position will be manned by a rotation of Duncan (a converted running back), Lee Poteat (former JV quarterback) and senior Quameak Lewis. “Our lack of experience in the secondary could pose a problem,” Linville said. Hopefully we’ll learn fast. Our strength is probably our front six or seven, but the secondary is a big question mark.”
West opens its season against 4A power Mooresville and its giddy-up offense at home Friday. Young, the 17th-year coach with 164 career wins printed on the back of his bubblegum card, remains an optimist.
“I like this team,” he said. “It’s a playoff team. We’ve got a chance to be OK — and even better than that — if we just play the game hard.”