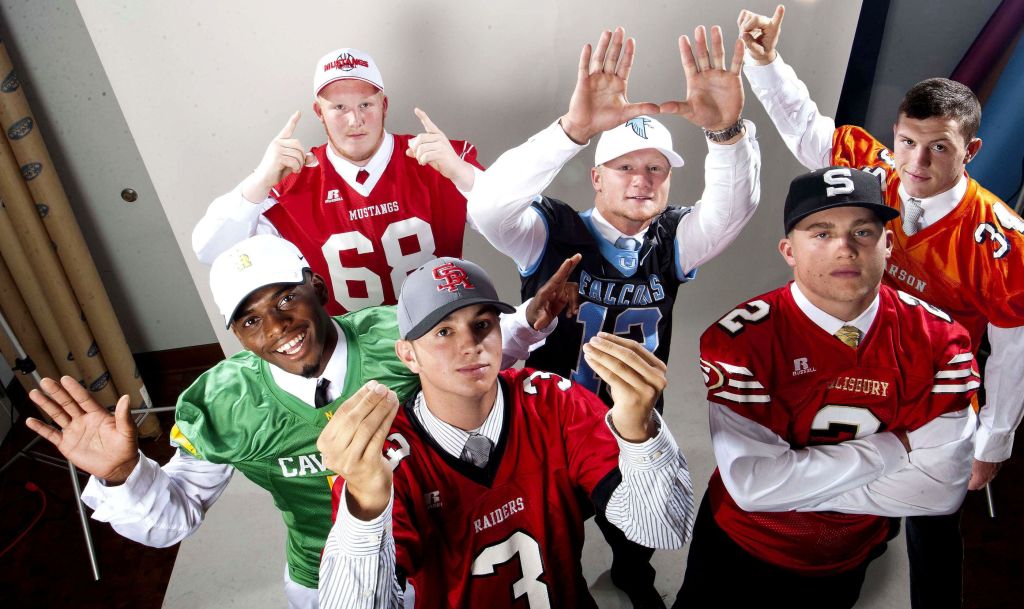 Fulcher was the Raiders’ all-county representative last year and was a bright spot in a winless season. The inside linebacker grabbed three interceptions and recovered two fumbles.

Clark is hard to catch at 5-5, 170 pounds and he uses that to his advantage. The junior got a crash course in varsity football last year in taking over for Justin Ruffin and did admirably, running for 471 yards and three TDs.

Kennerly has had injury troubles, but he’s displayed good accuracy and sneaky speed when healthy. The senior passed for 881 yards and four touchdowns last year while running for two before breaking his collarbone against Cox Mill.

Clark had 54 tackles and four tackles for loss last season. Another senior in North’s secondary, Clark should provide leadership for a Cavs team hungry to make an impact at the state level.

Williamson tied for the county lead in fumble recoveries as a junior with four. He’s got the size to play in college at 6-2, 275.

After transferring from Northwest Cabarrus, Rucker made an impact with three interceptions. He had a critical one in the win against West Rowan and he had two against Hickory Ridge. Also will be a key basketball player for the Cougars.

Another returning All-County defender, North coaches love Coney for his work ethic in practice and big hits in games. Coney had eight tackles for loss and four fumble recoveries in a 13-1 year for the Cavs. He recovered a blocked punt for a touchdown against Thomasville.

Boltz, a strong kid who could run guys over, bulled for 648 yards with five touchdowns last year. He could be used as a linebacker on defense in his senior season.

Jackson is a returning starter for SHS and is their most versatile, dynamic playmaker on defense. Teams will try to avoid the 5-10, 170-pound threat who can play on the line or at linebacker.

The Cavaliers are loaded on the defensive front and Parker, a 6-1, 230-pound senior defensive end, is a huge part of that. Parker was All-CCC with 48 tackles and 20 hits for loss last year with two sacks.

Wall did good things as a freshman in the offensive backfield after Calvin Edwards’ season-ending injury. In the final regular season game against South Rowan, Wall ran for two touchdowns and 189 yards, but he’s being counted on mostly as a DB.

Burton, 6-foot, 200 pounds, is a good mix of physicality and football savvy. Also a good wrestler who reached the state quarterfinals, Burton called the defensive signals last season and will be a senior leader for the Hornets.

McGee’s coming off an all-county season on defense where he had 49 tackles and 11 for loss. He’s changing positions to help out a depleted offensive line and coach Joe Nixon praises his unselfishness.

Lear has big shoes to fill after some good years from Austin McNeill, but he guided the jayvee team to a 9-1 record last season and looked good in spurts of varsity play.

Huneycutt made some impressive-looking catches last year for the Cougars. He won’t put up big numbers in a Joe Pinyan-offense, but the coach praises his hands and playmaking ability. Huneycutt was all-SPC last year, with six TD receptions.

Lewis was perpetually up in the faces of receivers last season along with the departed Najee Tucker. Lewis is 6-1, 185 pounds and can run a 4.7 40-yard dash.

New coach Ken McClamrock calls Jones “our best overall player” and it’s easy to see why. Jones is an imposing 6-foot, 300 pounds and not going to be easy to avoid for opposing defensive linemen. Jones attended the Shrine Bowl Elite 100 combine.

Hornets were physically overmatched in six of their 11 outings last season and Myers missed one game with a concussion, so his stats — 994 passing yards and 307 rushing yards — were better than they sound. He made the All-CCC team and will bring a lot of leadership and experience to the Hornets as a senior.

Big and tough, Bearden was one of the county’s more underrated players last season and made All-SPC. He had a forced fumble that led to a TD against East Rowan. Still only a junior, he’s got all kinds of upside and is moving this season from the defensive line to linebacker.

With MyQuon Stout moving on the to college ranks, McCurry could become the centerpiece of Carson’s defense. Like Bearden, McCurry made All-SPC but just missed on all-county. Like teammates Brandon Sloop and Alex Lyles, McCurry is a wrestling standout.

Banks is one of the rising stars in the county’s junior class and his 6-4, 295-pound frame is attracting ACC attention. Chris Hassard has moved on to the college ranks, but Banks could give West the county’s best offensive lineman again.

Jefferies shops in the big-and-tall department at 6-5 and about 280. He was All-Rowan County and All-CCC as a junior. He accounted for 23 tackles for loss last season.

At 6-4, Lyles, who has been a heavyweight wrestling state champion, is an immense presence on Carson’s defensive line. He made three fumble recoveries last season.

Large and swift, Isom is a big play waiting to happen. As a junior, he rushed 86 times for 580 yards and eight TDs, and he added 248 yards and four TDs as a receiver. He was all-county last season.

The senior has a chance to graduate as East’s all-time leader in passing yardage, touchdown passes and total offense, and that’s no small feat. Those school records have stood since C.M. Yates threw his last pass in 1970. Wyrick threw 20 TD passes last season and ran for six scores. He was All-SPC and All-Rowan County.

Baucom accounted for 20 TDs as a quarterback last season (7 rushing, 13 passing), but the plan is for him to be even more valuable playing multiple positions as a senior. West will try to get the ball in his hands whether he’s at tailback or slot receiver. He’s also one of the state’s top punters. Baucom was All-Rowan County and All-SPC.

Quick and strong, Saunders is one of the county’s top wrestlers and that physical ability also helps make him an active football player. He moved from outside to inside linebacker last season and made a transition from good to outstanding. All-Rowan County as a junior, he was second on the team in tackles to Dock Corpening, who has moved on to the college ranks.

The short-haired member of the Wyrick twins, Seth is coming off a spectacular junior season in which he led all Rowan receivers in receptions with 66 (a school record), receiving yards (924) and TD catches (12). He had a three-TD came against Northwest Cabarrus and made All-SPC and All-Rowan County.

Archie is a physically powerful QB, who can run over linebackers when his receivers are covered. He missed two full games and played sparingly in two others as a junior because of an injury, but he still threw for 1,457 yards and 16 TDs. He also rushed for nine TDs. His season included a 361 yards passing against West Davidson on only 17 attempts and he threw for four TDs against C.D. Owen in the playoffs. He made All-CCC and All-Rowan County,

Sloop is entering his fourth season as a starter and the senior’s consistency and durability have allowed him to put up some staggering career numbers. He enters this season seventh on the county’s all-time rushing list with 3,463 yards. Assuming he stays healthy, he could pass everyone except West’s K.P. Parks and Carson’s Shaun Warren on the career list.

As a junior, Sloop pounded for 1,127 yards on 228 carries and scored 11 TDs. Sloop had five 100-yard rushing games as a junior and made All-SPC and All-Rowan County,

Tall, strong, fast and smart, Harrison probably is as good a bet as anyone in the county to be a college standout. He was very consistent as a junior, with 48 catches for 790 yards and eight TDs. He was especially impressive in the playoffs. In those three gmes, he had 14 catches for 276 yards and two scores. He had six receptions and 110 yards against Shelby. He was All-CCC and All-Rowan County.

Chambers is a special back with special speed, special elusiveness and special vision. As a junior, he was the offensive player of the year in Rowan County and the CCC, and he’s on the 2A preseason All-State team.

Chambers scored 31 touchdowns in 2013. He rushed for a school-record 2.018 yards on 220 carries and topped 100 yards 11 times, His season included a six-TD game against Providence Grove that tied a county record. On top of everything else, he threw for 605 yards filling in at QB when Alexis Archie was hurt.

Chambers could break North’s career rushing record on opening night, and that’s a mark Mark Sturgis has held since 1976.