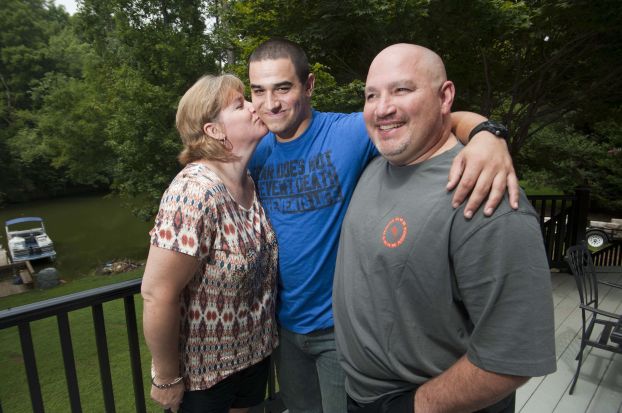 Wineka column: After Afghanistan tour, there’s no place like home for Spc. Mills

SALISBURY — As he picks out the melody on his guitar, Army Spc. Thomas Mills sings a song he composed at Fort Drum, N.Y., not long after returning from his nine-and-a-half-month stint in Afghanistan.

He titled it “Home,” and the lyrics talk about being back in Rowan County and driving the back roads in his truck. He has the windows down, radio on low and his younger brother, Seth, riding shotgun beside him.

Mills sings of sitting on his truck’s tailgate and being underneath the stars with the people he cares about most.

More than once, he repeats the line, “Thank you, God, for bringing me home.”

Listening to Thomas play the song in the living room of their High Rock Lake house, his mother, Alicia Mills, grabs for a tissue. She did the same thing Saturday night when the house was filled with family and friends welcoming Thomas home on leave.

“It’s really good to get your hands on him,” Thomas’ father, Chris, says.

Thomas Mills, 22, must return to Fort Drum Sept. 1, but his days in Afghanistan searching the roads for explosives with his dog, Taz, are over. By December, his three-and-a-half years of active duty will be finished, and he’ll be starting a whole new life in Rowan County.

He plans to keep playing his guitar and writing songs. The Army will help pay for him to attend college, and he also hopes to join Seth Mills and cousin Garrett Bean in their start-up business, G&S Insulation.

The Thomas Mills you see today — a muscular, 235-pound Army specialist — is a lot different from the 156-pound graduate of basic training at Fort Benning, Ga., in 2011.

He devotes himself to physical training and has become well-versed in hand-to-hand, combat fighting techniques.

Alicia Mills notices something else about her oldest son: “He’s a lot cleaner than he used to be,” she says.

Only a mother would notice how Thomas is making his bed and keeping his room tidy in the few days he has been home.

A former Troop 333 Boy Scout, Thomas Mills is a 2010 graduate of East Rowan High. Since he was a youngster, he wanted to be a soldier.

Thomas’ grandfather Jim Bean, a Marine and present commander of AMVETS Post 460 in Rowan County, proved to be a strong influence, and today Thomas is a member of Post 460 and its only active-duty member.

After basic training at Fort Gordon, Mills attended jump school before being sent to Camp Casey in South Korea. For a year, he served as part of security forces near the demilitarized zone, often driving or manning a Bradley Fighting Vehicle.

Returning from South Korea, he decided on changing directions completely and signed up to be a bomb-dog handler.

“As soon as I got asked whether I wanted to do it, I was all over it,” Mills says.

While most of the dogs trained to search for explosives are either German shepherds or Labradors, Mills says he was paired with Taz, the only full-blooded pit bull in the military.

After extensive instruction in New York, Mills met Taz for the first time at Fort Bragg, where they trained together for a month, followed by another month’s training in Yuma, Ariz. They shipped off to Afghanistan in the fall of 2013 for Bagram Airfield.

The black-and-white pit bull and Mills were inseparable. They lived together and slept together. At one point in their training, Mills said, he and Taz came in second on a search competition involving more than 1,500 teams.

In simple terms, Taz was trained to sniff out any kind of explosive, “basically anything that goes boom,” Mills says.

In Afghanistan, Mills and Taz found themselves deployed with Navy Seals and Special Forces teams. The typical scenario had Mills and Taz out front, followed by a soldier on each side of the road, with the rest of a unit still back with the truck.

They usually concentrated on roads, intersections and culverts. Only three times did they find explosives meant to harm, and they were handled safely.

Mills appreciates that not a single soldier was killed by an improvised explosive device on Taz’s watch.

After stopovers in Romania and Germany, Mills arrived back in the States June 23. Taz returned with him to Fort Drum, where he is being retired from active service.

When he finally received his leave, Mills rented a car, drove 12 hours and arrived in Rowan County Friday.

Thomas and his family have missed spending the past two Christmases together. He spent one in South Korea; the other, in Afghanistan. Family members back in the States regularly communicated with Thomas by Skype.

There was an eight-hour time difference in Afghanistan and 14 hours in South Korea. Here, Saturday mornings often were a prearranged time for everyone to talk.

With a special web camera, Thomas’ parents could see him on their big-screen television. Meanwhile, Thomas had a good wide-angle view of the living room.

There were times from Afghanistan when Thomas would grab his guitar and play the latest song he had written. On occasion, he might open the door behind him, and his mom and dad could hear enemy fire.

To say the least, their stress level has gone way down, now that Thomas is back in the States for good.

“I’ve not had nails in three years,” Alicia Mills says.

While he’s on leave, Thomas will be taking in all those little things he has missed, such as driving his truck on country roads with the windows down and the radio low.

He had four fishing poles cast into the cove Monday morning, and he also was looking forward to his mom’s baked ziti for dinner.

This coming Saturday, the AMVETS post plans to have a party for him.

In summary, it’s good to be home.

“It’s wonderful,” Alicia Mills says. “I’ve got my boys back together again.”

And she sure likes hearing that guitar again.