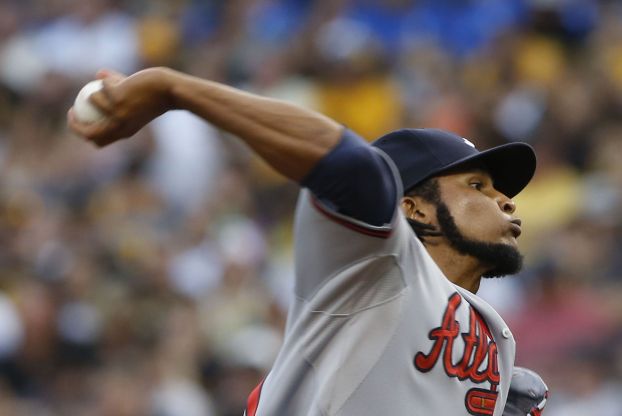 PITTSBURGH (AP) — Ervin Santana said “everything” was off when he took the mound Monday.
No matter. His Atlanta Braves teammates gave him a six-run lead before he threw a pitch.
Jason Heyward and Andrelton Simmons homered to begin a big first inning, and the Braves beat the sliding Pittsburgh Pirates 7-3 on Monday night for their fourth consecutive victory.
The early outburst was enough for Santana, who allowed three solo homers among nine hits in 5 1-3 innings.
“I know I didn’t have my stuff today, but for me it was one of my best games because I gave up three runs,” said Santana (13-6), who improved to 8-1 over his past 10 starts. “Anytime you give up three runs or less, it’s a good outing. So I’ll take it”.
Pittsburgh has lost six in a row. Starling Marte went deep twice, and Neil Walker added a homer that became the first to reach the Allegheny River beyond right field at PNC Park this season.
Relievers Luis Avilan, David Hale and James Russell combined for 3 2-3 hitless innings for Atlanta, which broke a tie with Pittsburgh for third place in the National League wild-card standings.
“We went through these tough stretches in April and early May and we’ve played really good baseball up until this last week,” Pirates second baseman Neil Walker said. “We’re still the same team.”
Heyward and Simmons started the game with the Braves’ fifth set of back-to-back home runs this season, and it got worse from there for Vance Worley (5-3). Chris Johnson and Gerald Laird had run-scoring singles as Atlanta bolted to a 6-0 lead.
“I know we didn’t score a whole lot the rest of the way,” said Heyward, who had had three hits and a sacrifice fly. “But still, that’s a lot of pressure for a team to come back against.”
Worley managed to pitch six innings and was charged with five earned runs. He allowed nine hits, struck out four and walked two.
“After (the first inning), I figured it out,” Worley said. “It clicked, I was able to drive the ball down in the zone and get the results that I needed.”
TRAINER’S ROOM
Braves: During a rehabilitation outing for Triple-A Gwinnett, RHP Shae Simmons (right shoulder strain) did not record an out and was charged with four runs. He walked two and allowed two hits while throwing 21 pitches.
Pirates: After taking live batting practice prior to the game, OF Andrew McCutchen (left rib fracture) said he expects to come off the DL on Tuesday. … SS Jordy Mercer (right forearm tightness) was not in the lineup for the fourth consecutive game.
A FIRST AT FIRST
The Pirates’ Pedro Alvarez started at first base in his first career appearance at any spot other than third. Alvarez, whose 25 errors lead the majors, had seven put-outs. His first chance was an errant throw by second baseman Neil Walker that led to two runs being scored.
LATE ARRIVAL
Because the Braves did not get into Pittsburgh until 3 a.m. Monday morning, manager Fredi Gonzalez elected to rest regulars B.J. Upton and Evan Gattis.
BACK-TO-BACK BEGINNING
Heyward’s homer was his third of the season to lead off a game and sixth of his career. According to STATS, Monday was the fifth time the Braves began a game with consecutive home runs.
UP NEXT
Braves: Tuesday starter RHP Aaron Harang (9-7, 3.51 ERA) has 15 career wins against the Pirates.
Pirates: Despite having a 2.36 ERA over 42 innings in seven starts since coming off the DL, LHP Francisco Liriano (3-9, 3.78 ERA) has lost three of five decisions. He’s lost his past two outings.

BROOKLYN, Mich. (AP) — It had been 13 years since Jeff Gordon’s last victory at Michigan — which came during... read more