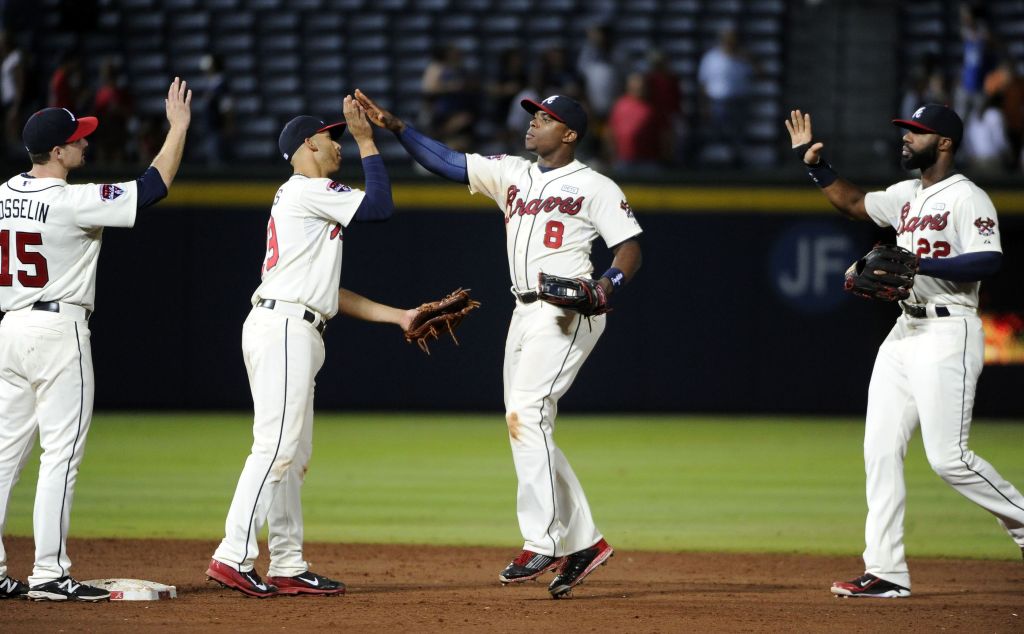 ATLANTA (AP) — Mike Minor needed a reason to believe he could work his way back to his 2013 form.
Beating Jon Lester could provide that confidence boost.
Minor pitched seven strong innings, Justin Upton and Chris Johnson homered and the Atlanta Braves beat the reeling Oakland Athletics 4-3 on Sunday night, ending Lester’s seven-game winning streak.
“That’s Mike Minor of old right there,” Atlanta first baseman Freddie Freeman said.
The Braves swept the three-game series, leaving the A’s with a five-game losing streak, their longest of the season. The A’s have lost seven of eight overall and trail the Angels, who lost to Texas on Sunday, by percentage points in the AL West.
“This is really the first bad road trip we’ve had this year,” manager Bob Melvin said. “This was not a good trip. So we’ve got to get home and we’ve got to regroup. It will be good to get home in front of our crowd. They’re usually good for us.”
Minor (5-8), who entered with a 5.33 ERA, allowed two runs in a performance reminiscent of last season, when he was 13-9 with a 3.21 ERA.
“We’re going to need him rolling to get us where we’re going to go,” Braves manager Fredi Gonzalez said.
Oakland’s Nate Freiman hit two homers, giving him three in the series, but Minor allowed only two other hits.
“I feel like I’m in a different mindset,” Minor said after his second straight quality start.
Craig Kimbrel worked a perfect ninth for his 37th save.
Lester (13-8) allowed four runs, three earned, and six hits in six-plus innings in his first loss since June 7 for the Red Sox at Detroit. He had been 3-0 with a 2.49 ERA in three starts since his July 31 trade to the A’s.
Upton hit four homers in the 10-game homestand, including two against the A’s. He has hit 16 of his 23 homers at Turner Field.
Freiman led off the second inning with a drive that landed several rows beyond the center-field wall.
The Braves tied it in the bottom half. After Upton singled, Johnson lined to third baseman Josh Donaldson, who threw to first base in an attempt for a double play. The throw hit Upton and rolled into the Atlanta dugout, and Upton was awarded third base. Evan Gattis followed with a run-scoring single to right field.
Phil Gosselin led off the Atlanta fourth with a single to right field. With one out, Upton drove a low, inside pitch from Lester about 10 rows deep into the left-field seats for a 3-1 lead.
“I thought it was a good pitch when I threw it,” Lester said. “I went back and looked at it and, good pitch. So sometimes you’ve got to tip your hat.”
0-FOR-EVER
Lester is still waiting for his first career hit. He was 0 for 34 in eight seasons with Boston and his drought continued in his first two at-bats with the A’s. He struck out and hit a fly ball to left field.
GOING WITH GOSSELIN
Gosselin was 1 for 4 in his third straight start, including two straight at second base over another rookie, Tommy La Stella, who struck out as a pinch hitter in the seventh. Gosselin hit his first homer in the series opener and had two hits in Saturday night’s win.
TRAINER’S ROOM
Athletics: CF Craig Gentry, on the 15-day disabled list with a broken right hand, is ready to begin a rehab assignment with Triple-A Sacramento.
Braves: Gonzalez said RHP Shae Simmons (strained right shoulder) will make a second rehab assignment with Triple-A Gwinnett on Monday after throwing 10 pitches without a problem on Saturday.
UP NEXT
Athletics: After an off day on Monday, the A’s take on another NL East team when they open a two-game series against the New York Mets on Tuesday night. Scott Kazmir (13-5), who already has matched his career high in wins, will start for Oakland.
Braves: After completing their 10-game homestand, the Braves open a series at Pittsburgh on Monday night as RHP Ervin Santana goes for his 13th win. Santana (12-6) leads the Braves in victories.