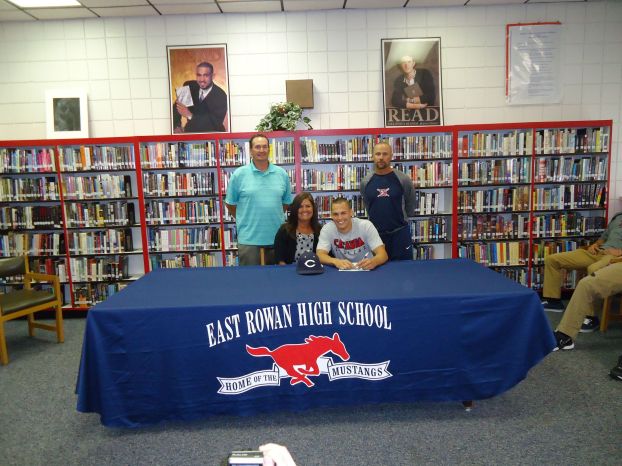 GRANITE QUARRY — East Rowan graduate Connor Johnson turns 19 on Wednesday, so it’s a big day for two reasons. It will also be his first day as a college student at Catawba.
The lefty pitcher will start his baseball career with Catawba’s fall program Aug. 25.
When his friends talk to Johnson now they inevitably kid him about the streak he has going. It’s the elephant in the room. No one wants to jinx him, but it’s hard not to mention it.
No one wins them all in baseball, a democratic sport in which even the best major league teams win less than 60 percent of the time. Yet, Johnson has won them all as a pitcher for quite a while.
He’s put together back-to-back-to-back undefeated seasons. He’s 21-0 in his last 21 decisions. He was 4-0 for Rowan County American Legion in 2013, went 10-0 for East Rowan in spring and put up a 7-0 record for the 2014 Legion squad.
All those teams Johnson pitched for were good, but none were fantastic. Those three teams lost 27 times combined. Johnson took his turn in the rotation every time and didn’t lose any of those 27.
As a high school senior, he struck out 114 batters in 80 innings and posted a 1.14 ERA to win the Patrick Snider Memorial Award that goes to the Rowan County Pitcher of the Year.
A few times he was a little lucky, but mostly he was just good.
“I try not to think about not losing in so long because I know it’s just one of those things,” Johnson said. “Sooner or later, you lose in baseball. Who knows? I might lose my first college game.”
Catawba is as excited about the 2015 baseball season. While the starting lineup from another championship squad was nearly wiped out by graduation, Catawba expects to be as good battery-wise as any Division II team in the nation.
Slugging catcher T.J. Wharton returns from a successful summer that included a strong showing in the prestigious Cape Cod Baseball League, while pitchers Craig Brooks and Shaefer Shepard are All-America candidates. Matt Farmakis is ready to be a weekend starter, and Russ Weiker has joined the Indians as a transfer from Division I Liberty. The bullpen is stout. And then there’s Johnson.
“The sky’s the limit for Connor,” said Catawba coach Jim Gantt, who also coached Johnson on the Rowan Legion team. “To be left-handed and to have the arm strength he does, he can be something special.”
Johnson has natural gifts, but he also works hard at his craft. He long-tossed Saturday, aired it out for a short period on Sunday, and plans a bullpen session on Monday.
Johnson was 5-4 with 78 strikeouts and a 2.61 ERA for a mediocre East Rowan team as a junior in 2013, and coach Brian Hightower wasn’t ready to recommend him to high-level programs.
But Johnson made huge strides as a senior with an improved curveball and increased velocity that pushed radar guns into the high 80s. He jumped to D-I recruit status, and Charlotte, Appalachian State and UNC Wilmington were among those interested.
Yet, Johnson stuck with his verbal commitment to Catawba and his hometown program. Johnson, whose father, Craig, coached Erwin Middle School for many years, wanted to be a man of his word.
“I know I can be happy at Catawba,” he said. “I’m going to be part of something good and I think good things are going to happen for me there.”
Gantt admires Johnson’s work ethic — he held down a summer job while pitching for the Legion team — and appreciates his growing maturity.
“Connor’s always been a good guy,” Gantt said. “But now’s he’s grown up a lot as a baseball player.”
Gantt doesn’t expect Johnson to light up the world right away. Every team in the South Atlantic Conference has good hitters, and he knows there will be growing pains.
“In college baseball, usually the harder you throw, the harder it gets hit,” Gantt said. “But Connor will learn quickly to back off just enough where he can locate strikes and stay in good counts. He’s making good progress with his curveball and his changeup. He’ll also pitch to both sides of the plate and that puts him ahead of most freshman pitchers. He’s never afraid to come inside.”
Catawba’s fall schedule will have a lot of bearing on what happens this spring. Gantt’s policy is to look at every new pitcher as a potential starter first. He figures out his starters. Then he figures out the bullpen roles.
“It’s all up to Connor,” Gantt said. “But I really expect him to help us immediately.”
Johnson plans to work hard and learn. It’s a different situation for him now. He won’t be asked to dominate or to lead. He’ll just be asked to contribute his share.
“I already know coach Gantt and I know how he coaches, but that doesn’t mean I won’t be starting out on the bottom of the totem pole,” Johnson said. “It’s more serious now, and I don’t plan on speaking unless I’m spoken to. This is a whole different level. This a whole different ballgame.”

BROOKLYN, Mich. (AP) — The numbers keep climbing — and this time the rise was anything but gradual. Jeff Gordon... read more