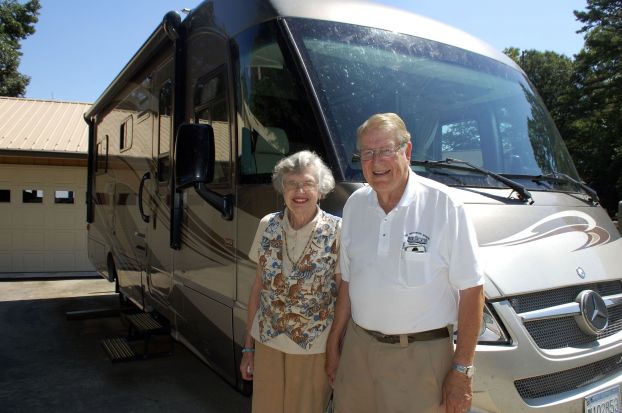 Wineka column: When it comes to travel, the Ketners find real value in their RV

SALISBURY — It’s not often you can leave on a six-week trip and still take home with you. But folks who are part of the RV community enjoy these kinds of vacations all the time.

Last fall, Dr. Bruce and Margaret Ketner were part of a caravan of 24 RVs that traveled a Mississippi River-inspired journey from Minnesota to New Orleans. They left Sept. 10 and didn’t return to their High Rock Lake home until early November.

“It’s something you normally wouldn’t do,” Bruce says.

But with an RV, the Ketners had everything they needed, down to their cherished dog, Lottie. The 26-foot Mercedes Via RV they rely on has two televisions, a refrigerator, freezer, microwave, queen-sized bed, shower, bathroom, breakfast table, sofa, GPS, satellite radio, storage space, luxury bucket seats and automatic awnings.

Bruce still laughs when he recalls what one campground manager observed after he had connected Bruce’s RV to power, water and cable television.

“Now you’re ready to rough it,” the man said.

With its power-steering, Bruce says, the RV drives pretty much like a car. He likes to boast that he also achieves 15 miles-per-gallon in fuel efficiency, even pulling a Chevy Malibu.

Their Mississippi River trip, sponsored by the Winnebago-Itasca Travelers, prearranged all the local tours, campgrounds and hotels (where they sometimes had meals).

Margaret and Bruce were able to wade across the headwaters of the Mississippi River at their starting point in northern Minnesota. At the end of the trip, they climbed aboard a small-engine plane for a scenic trip across the wide Mississippi Delta.

Bruce blames his brother, Dr. Bill Ketner, for getting him to even think about buying an RV. If he were going to travel in his pending retirement, Bruce thought back then, he would rather spend the nights in comfortable hotels.

“Once you get into it, it’s a different lifestyle,” Bruce says now. “It opens the door to another horizon. … You meet nice people and have a lot of fun.”

Since 1999, the Ketners have put more than 100,000 miles on four different RVs. They’ve traveled to all 48 states in the continental United States and parts of Canada and Mexico.

They pretty much travel somewhere every month, often as part of trips planned by the Winnebago Tarwheels. They also drive the RV back and forth to Florida to visit their daughter, son-in-law and three grandchildren.

With an RV, you learn to live in a small space and leave behind things you don’t need. The Ketners figure they prepare about half of their meals in the RV, but part of traveling also is eating out and experiencing new cuisines, they acknowledge.

The couple rely on their Malibu to explore the places where they stop and spend time. “I wouldn’t want to travel without a car,” Bruce says.

They use a special atlas to locate campgrounds in whatever state they’re in. They often stay at Encore or KOA campgrounds.

“You can find a pretty nice place,” Bruce says.

He prefers driving during the day. Evenings often are a time to sit under the awning and meet other RVers.

Margaret adapted quickly to the whole idea of traveling in an RV.

Their first RV trip was an excursion into the mountains near Gatlinburg, Tenn. The Ketners began their RV passion with a 23-foot Toyota, which Bruce bought for $4,500.

A 30-foot Winnebago Brave came next, followed by a 33-foot Vista Winnebago. “Boy, did it like the gas,” Ketner said, remembering how $200 wouldn’t even fill it up.

About a year ago, Ketner purchased the top-of-the-line Via, which has a Mercedes chassis and a Winnebago coach.

The Ketners have been to three national Winnebago rallies — most recently the one in Forest City, Iowa. The national rallies attract some 1,400 RVS, and the only requirement is, “You have to arrive in a Winnebago,” Bruce says.

Ketner, who will be 79 Friday, is a retired Naval Reserve captain. He was a dentist in Salisbury for 42 years before retiring in 2003. Bruce and Margaret, a retired teacher, built their lake house in 1974, but they lived in Country Club Hills in Salisbury until 1996, when they tired of keeping up two properties.

On the road in their RV, Bruce says he tries to keep his speed on the open highway at 60 to 62 mph.

“You’ve got to drive it,” he says of the importance of always being alert. “You can’t float along. I’m pretty careful.”

If he even feels a bit drowsy, it’s easy with the RV to pull off into a rest stop and take a nap.

The couple are planning a trip to Smith Mountain Lake in Virginia for Margaret’s reunion with friends from the University of Richmond. With their RV, the Ketners will stay at the Running Cedars campground rather than take a hotel room for more than $100 a night.

Bruce Ketner has had only once accident with an RV, and it happened at the lake house.

After returning from a trip, Ketner backed into the corner of his house, because he had forgotten to put down the 4-by-4 piece of wood he usually relied on to signal when he was close to the structure.

Ketner did what you might expect — he used the insurance as a down payment on his next RV.

SALISBURY — Food Lion cofounder Ralph Ketner said if he ever keels over and dies instantly, you should check with... read more