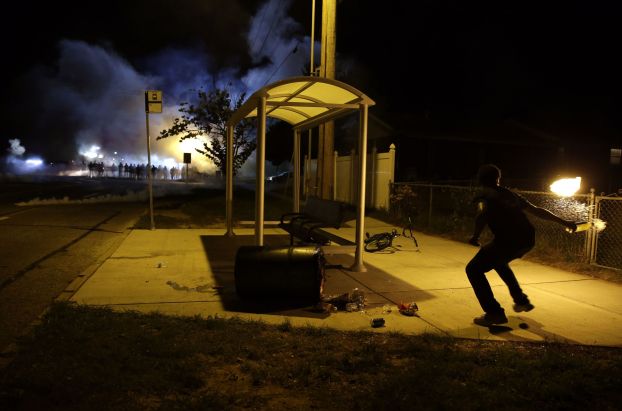 Your daily look at late-breaking news, upcoming events and the stories that will be talked about today:
1. UNREST ESCALATES IN FERGUSON
Police and people protesting the fatal shooting by an officer of an unarmed black teen exchange smoke bombs, tear gas and Molotov cocktails.
2. U.S. GRAPPLING WITH IRAQ OPTIONS
The White House is weighing its strategy against the Islamic State’s threat which could come to dominate the remaining years in Obama’s second term.
3. POPE RECEIVES CONTRASTING WELCOME ON KOREAN PENINSULA
Pope Francis is officially greeted in Seoul – the first pontiff to visit in 25 years – as Pyongyang fires test projectiles off its coast around the time of his arrival.
4. HINTS OF PROGRESS IN TALKS TO END GAZA WAR
Israel and Hamas are considering an Egyptian proposal that at least partly addresses both sides’ demands with the truce extended another five days.
5. CALIFORNIANS TO VOTE ON $7.5 BILLION WATER PLAN
The drought-stricken state wants to make the largest investment in infrastructure in decades to build reservoirs and clean up ground supplies.
6. DEATH OF PRESIDENTIAL CANDIDATE COULD UPEND BRAZIL ELECTIONS
Incumbent Dilma Rousseff may have a tougher time winning re-election if Eduardo Campos’ running mate enters the race.
7. IT’S A JUNGLE OUT THERE: ANIMALS STAR IN CAMPAIGN ADS
Parroting Obama? Cutting pork? Pigs, dogs and hogs are a fixture in this year’s election season advertising.
8. WHO MIGHT BE GETTING LIGHTER SENTENCES
The federal panel that sets sentencing policy turns its attention to reducing penalties for some business crimes after easing them for nonviolent drug offenders.
9. WHY IT MIGHT BE OK TO SAY ‘PASS THE SALT’
A large international study suggests that the amount of sodium most folks consume is all right for heart health — and too little may be as bad as too much.
10. WHICH GOLFER WON’T PLAY IN RYDER CUP
Tiger Woods says his back problems will prevent him from joining the U.S. team at the competition next month in Scotland.

Your daily look at late-breaking news, upcoming events and the stories that will be talked about today: 1. PALESTINIANS MULLING... read more