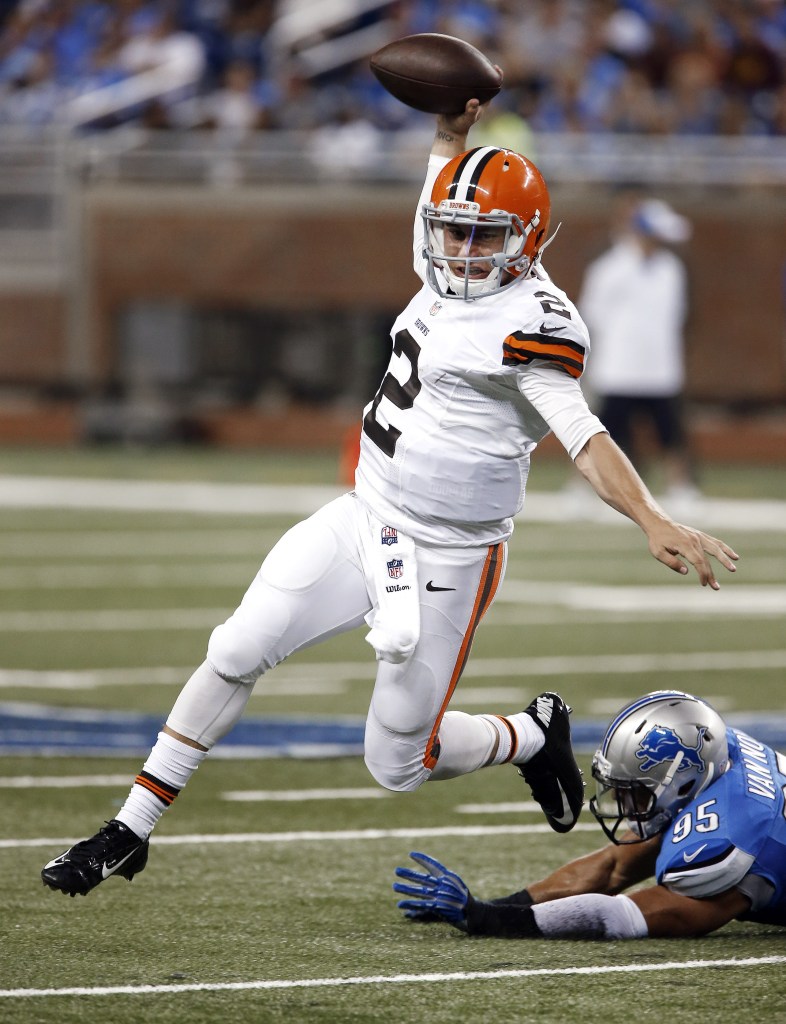 DETROIT (AP) — Johnny Manziel showed off some of his fancy footwork, and the Cleveland rookie looked sharp with his arm too in his preseason debut, although the Browns lost to the Detroit Lions 13-12 on Saturday night.
Manziel entered the game as a backup in the middle of the second quarter, and although he couldn’t take his team to the end zone, he did go 7 of 11 for 63 yards, completing one more pass than starting quarterback Brian Hoyer. Manziel also ran for 27 yards on six carries, including a 16-yard scramble in the third quarter.
Matthew Stafford led the Lions to a field goal on his only drive of the game. Star receiver Calvin Johnson didn’t play.
Cleveland receiver Nate Burleson, who played in Detroit the last four seasons, also sat out this game.
Detroit’s Kellen Moore threw a 21-yard touchdown pass to Corey Fuller with 1:05 remaining in the game, and Giorgio Tavecchio made the long extra point to give the Lions the one-point win.
GIANTS 20, STEELERS 16
EAST RUTHERFORD, N.J. (AP) — Rashad Jennings had a 73-yard touchdown run in the first quarter and Curtis Painter’s scoring pass with 2:50 left gave the Giants a victory over Pittsburgh.
Howard Jones had given the Steelers a 16-13 lead when he picked up backup quarterback Ryan Nassib’s fumble and went 28 yards for a touchdown with 10:16 to go.
But Painter led a 12-play, 80 yard drive and threw a 3-yard scoring pass to Corey Washington for the victory.
Eli Manning played four series and didn’t complete a pass in two attempts for the Giants. They opened the preseason last week with a 17-13 win over Buffalo in the Hall of Fame.
Ben Roethlisberger played only one series for the Steelers (0-1). He was 1 of 2, with a 46-yarder to rookie third-round pick Dri Archer to the Giants 14.
TITANS 20, PACKERS 16
NASHVILLE, Tenn. (AP) — Jackie Battle scored on a 7-yard touchdown run with 5:02 left, and the Titans rallied to beat Green Bay in Ken Whisenhunt’s coaching debut in Tennessee.
Rookie Zach Mettenberger made up for two turnovers in the fourth quarter by completing all three passes for 71 yards to set up Battle’s go-ahead touchdown for Tennessee’s first lead in a preseason opener played mostly in a pouring rain.
With quarterbacks having trouble holding onto the ball, Green Bay coach Mike McCarthy had to feel good about his pregame decision to scratch not only Aaron Rodgers but also Eddie Lacy along with eight other Packers.
Matt Flynn started for Rodgers and was 5 of 10 for 49 yards playing most of the first half. He left with the Packers leading 7-6 thanks to James Starks’ TD capping the opening drive. Starks played only the first series in place of Lacy, and he finished with six carries for 49 yards.
Jake Locker played only the first quarter and was 1 of 2 for 5 yards. He bobbled a snap, though he recovered. He could have left with the score tied except Maikon Bonani missed the extra point after Shonn Greene’s 13-yard TD run.
CARDINALS 32, TEXANS 0
GLENDALE, Ariz. (AP) — Carson Palmer was 5 for 5 for 84 yards and a touchdown in his only series and Arizona spoiled Bill O’Brien’s first game as Houston’s coach.
Ryan Fitzpatrick had a rough debut as Houston’s quarterback. Playing the entire first half, he completed 6 of 14 passes for 55 yards with two interceptions as the Cardinals took a 20-0 lead at the break.
Arizona rookie Logan Thomas played the entire second half, completing 11 of 12 passes for 113 yards and a touchdown.
The Texans were without wide receiver Andre Johnson, running back Arian Foster and cornerback Johnathan Joseph — all nursing minor injuries.