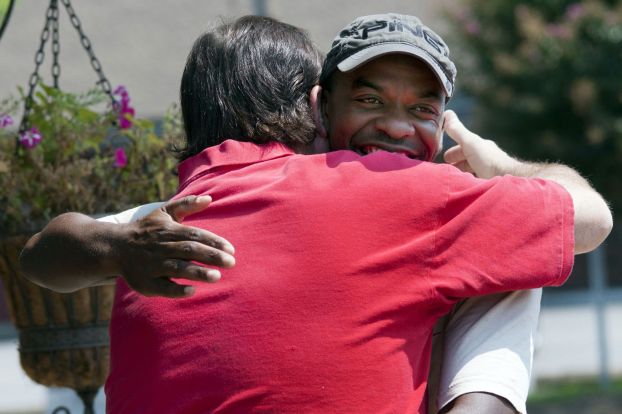 ‘Friends for life’: Steve Murph meets man who helped save him from burning van

The archangel Michael is often portrayed holding a sword. Steve Murph’s angel happened to be wielding loppers.
On May 18, Trent Clement used the long-handled landscaping tool to break the window of Steve’s burning Volkswagen bus after he wrecked on U.S. 601. Trent, Steve’s son and friends then pulled Steve out just before the bus exploded.
Until an article ran in the Post about Steve’s accident, he didn’t know who saved him. The two met Wednesday afternoon at L.A. Murph’s, the Salisbury restaurant owned by Steve and his wife, Laura. Steve is recovering well from third-degree burns on his right leg.
Before Trent arrived, Steve paced the restaurant anxiously, much like a kid on Christmas morning. Laura was there, as was their daughter, Kate, and her friend Lainy Slate. Mike Zimmerman came by with his son, Nathan, and their young friend Jacob Hill.
“I told my dad I wanted to come up and meet him,” Kate said of the man her dad has called his angel. “I wanted to thank him, and tell him it’d be a lot different if it wasn’t for him.”
Kate invited Mike.
“How am I gonna say no to that?” Mike said. “But I’m gonna try not to cry — don’t you put that in the paper!”
Tears were shed pretty much all around when Trent pulled up, having finished up his landscaping job for the afternoon. He saw Steve standing at the door and threw up his hand.
“When he pulled up and I saw his face, I knew it was him,” Steve said later.
Steve went out to the sidewalk to meet him, and the two men embraced for a long time.
They immediately started talking about the accident, and Trent was carrying with him the loppers he used to break the bus windows.
“I beat on it probably 10 times,” he said. “I busted out the side window, and his arm fell out. Then his head fell out, and we pulled him out. I told him, ‘You ain’t gonna die on my watch.’ ”
He glanced at Steve, their arms still around each other.
“It’s good to see you, man,” Trent said. “It’s really good to see you.”
Steve introduced him to all of his friends and family gathered. Trent shook everyone’s hand, and he gave Steve the lopper he used to break into the 1965 Microbus.
“They told me to run to the truck and get something,” Trent recalled. “It was the only thing I could come up with. Steve said, ‘I’m in here! I’m burning! I’m burning!’ We got him out the side window.”
Trent hadn’t originally planned to come to Salisbury that evening, but he had to go pick up something at a friend’s house.
“I got around the curve there on 601, and it looked like there was a fridge sitting in the ditch. It was burning,” Trent said. “I thought, this ain’t making no sense. I passed it and realized it was a van. I hit it in reverse. I went over and got these and started whamming it!”
Trent lives with his family in Mocksville, and had just come from church that night, he said.
“I had on my polo shirt and pants and my dock shoes — I was clean!” he said. “But I didn’t get cut or hurt. I’m glad I was on that road.”
“I’d done prayed,” Steve said. “I said, ‘Lord, if you take me, please don’t take me this way.’ I wasn’t worried about burning up, but I wondered how would this affect my son and his friends.”
When Trent arrived on the scene, there were bystanders, but no one would get close to the van for fear it would explode.
“People were yelling to get back,” he said. “There ain’t no way I was getting back.
As soon as I busted out the window, black smoke rolled out. You could see that black smoke a mile away. As soon as we got him out, it blew up.”
“It was seconds,” Steve added.
“I ain’t ever seen nothing like that,” Trent said.
“I threw his shoes away,” Laura said, tears running down her cheeks. “The soles were melted.”
Overcome with emotion, the two men embraced again.
“God sent you to me,” Steve said. “I was so upset. There was another guy there, but I couldn’t figure out who he was. We are friends for life.”
“I’m glad you’re here,” Trent said. “That’s the main thing. That’s blessing enough for me.”
“I can’t wait to meet your family,” Steve said.
Trent’s parents are the Rev. James and Crystal Clement, and he has a brother, Quentin. The family lives in Mocksville, on the golf course at Lake Louise. Trent enjoys golf, hunting and fishing, and, like Steve, classic cars.
Inside the restaurant, Steve gave Trent a plaque he’d had made for him, and read the words to him: “Presented to Trent Clement, for being a man of courage, bravery and having concern for others. Forever indebted to you, Steve Murph.”
Trent told Steve he’d driven by the restaurant many times. Steve told him to come by any time he wanted to eat — it’d be on the house. After Kate gave Trent a cooler full of L.A. Murph’s specialties, Steve and Trent dug into heaping plates of cashew chicken salad.
“Let’s get it going!” Steve said, spreading his napkin on his lap.
And then, like friends often do, they shared a meal.