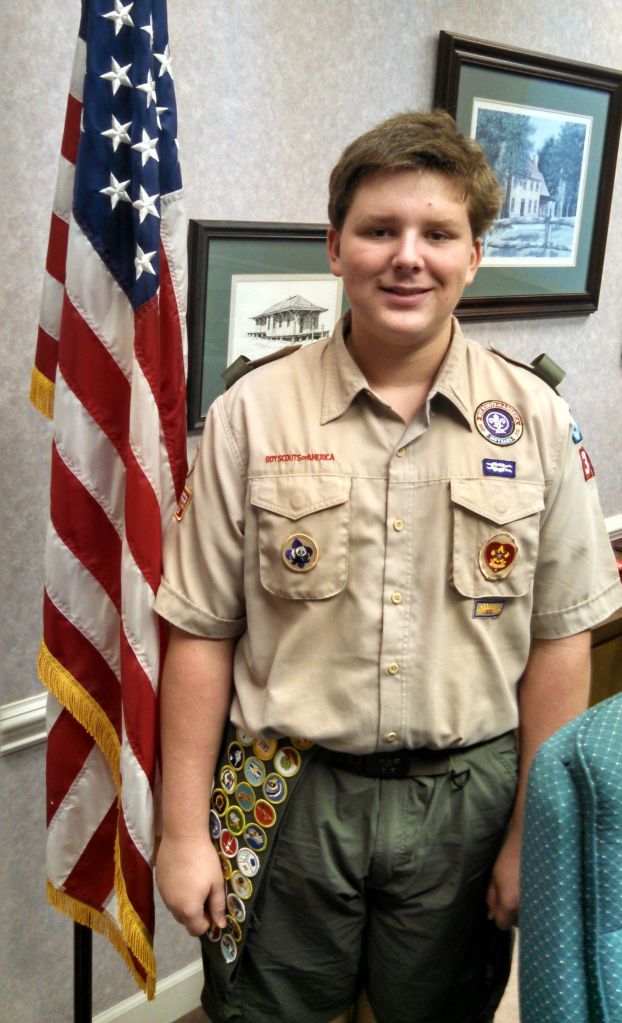 GRANITE QUARRY — The Granite Quarry Board of Aldermen counts on seeing Zach Huddleston every month.
He’s not a bill collector or an angry citizen. He’s not a department head making a report, or a relative of the mayor.
Zach is a Boy Scout, and for the past eight years, he has been coming to Granite Quarry Town Hall — usually on the first Monday of the month — to lead aldermen in reciting the Pledge of Allegiance.
He walks front and center to the carpeted area in front of the aldermen, and as everyone turns to face the American flag in the corner, Zach brings his hand up in salute and starts the pledge.
The actual pledge requires maybe 30 seconds every month, but Huddleston wears his Scout uniform and takes the job seriously. After he’s finished, he usually exits through a side door for home, and the aldermen get on with their business.
Huddleston, 14, and a rising ninth-grader at Gray Stone Day School, says he considers himself patriotic and figures he’ll keep helping the aldermen with the pledge “as long as I’m a Scout.”
Now closing in on 6 feet tall, Zach has pretty much grown up before the eyes of Town Manager Dan Peters and several of the town board members, such as Alderwoman Mary Ponds.
Ponds remembers the first time Zach led the pledge and how excited and nervous he was about it.
“I think it shows great dedication and commitment on his part,” Ponds says. “He has followed it through, and I think that just speaks highly for who he is and the organization he represents.”
Huddleston first recited the pledge at a Granite Quarry board meeting when he was a 6-year-old Cub Scout with Pack 379. The whole pack came that first night and led the audience in the pledge.
But Huddleston came back by himself the next month and asked whether he could do the honors himself. He kept attending since then, as he has progressed through Scouting and is currently a member of Troop 333 at St. Matthews Lutheran Church.
“He just liked doing it,” says his mother, Beth, who adds it’s no different to Zach, as a Scout, than putting flags on graves of soldiers during Memorial Day.
Beth or her husband, Mark, usually drive Zach to the town board meetings from their home in Garland Place.
Zach says he has known the Pledge of Allegiance since kindergarten. He estimates that through the years he has missed about 10 Granite Quarry meetings — most of those because of attending summer camps.
“He’s a fixture for us, a monument for us,” Ponds says.