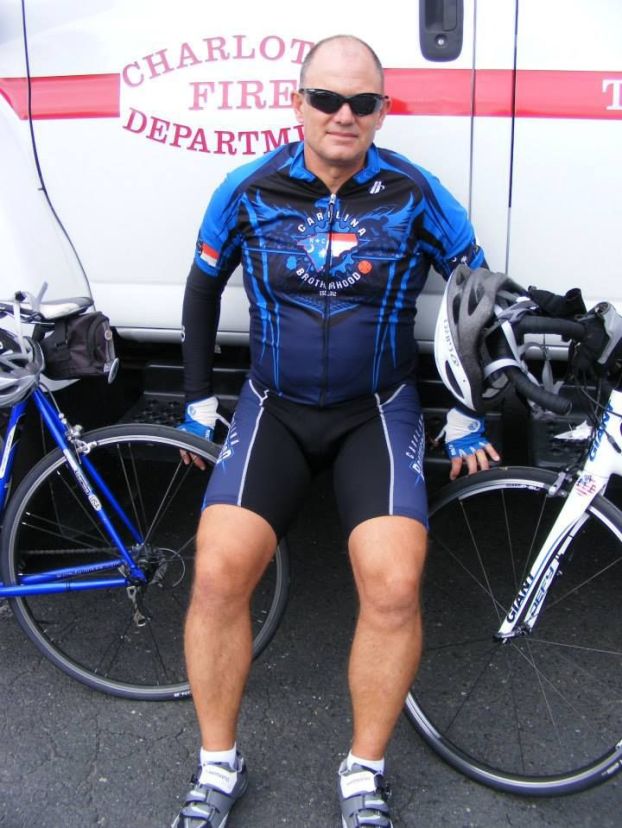 SALISBURY — He’s back in the saddle.
Salisbury Fire Department Battalion Chief Jay Baker jumped on his trusty bicycle and departed Raleigh this morning with other Carolina Brotherhood firefighters, police officers and emergency personnel for a 400-plus mile, weeklong journey that will end in Charleston, S.C., Saturday.
This is the third year in a row Baker has raised funds and ridden the entire trip, which provides emotional and financial support for the families of those lost in the line of duty in the past year in the Carolinas.
The group departed from the N.C. Fallen Fighters Memorial in Nash Park, Raleigh.
The 2014 ride is dedicated to 10 men who died last year. They include:
• Chief Scott Morrison, Knotts Island Volunteer Fire Department.
• Firefighter Tony Baker, Mountain View Volunteer Fire Department.
• Capt. David Heath, New Hanover County Fire Rescue.
• Firefighter Jon Schondelmayer, Swift Creek Rural Fire Department.
• Chief Jeffery Fields, Youngsville Volunteer Fire Department.
• Police Officer Robert Bingaman, Asheville Police Department.
• Firefighter Michael Broz, Dorchester County (S.C.) Fire Department.
• Loris (S.C.) Fire Chief Rodney Hardee.
• Deputy Sheriff Joseph Antwine, Florence County (S.C.) Sheriff’s Office.
• Deputy Sheriff Tim Causey, Horry County (S.C.) Sheriff’s Office.
Baker rode in the inaugural Carolina Brotherhood trip in 2012, and he has relied on the same bicycle — except for the replacement of tires — each of the three years.
Several of this year’s Carolina Brotherhood riders and support team members stopped by the Salisbury Fire Department Monday afternoon to pick up Baker and his gear before heading to Raleigh for a send-off dinner Monday night.
Baker said the annual cycling trips, which often include some arduous sections, are missions of support for the families who have lost loved ones. A side benefit is the good fellowship, bonding and networking that happens each trip and continues throughout the year among the men and women who participate, Baker said.
Baker, 48, is usually one of the older riders. He said he tried to average 75 to 100 miles a week as part of his training leading up to this year’s ride.
The participants must use their own personal time to take part in the event. Baker said two of his coworkers agreed to split his scheduled shift Wednesday, and he took a personal leave day for this coming Saturday.
Today’s leg is 60 miles from Raleigh to Fayetteville.
Wednesday’s leg goes 87 miles from Fayetteville to Wilmington.
Thursday’s trip takes in 88 miles and goes from Wilmington to Loris, S.C.
Friday the bikers go from Loris to Lake City, S.C. — a distance of 71 miles.
Saturday’s final leg goes 115 miles from Lake City to Charleston.
The core group of riders is usually about 30, with others in support positions.
Besides Baker, participants this year come from Raleigh, Asheville, Charlotte, Gastonia, Wilson, Charleston, Columbia, S.C., and Wilmington. The group also includes a Blue Ridge Park ranger and three participants from Florida.
The riders and support teams usually stay overnight at local fire stations or other community centers. Rest stations also are set up in key towns along the route.
Baker said the riders are treated so well along the route it‘s possible to gain weight during the trip.
Departure time each day is 8 a.m., and riders shoot for an arrival time in each overnight station at about 4 p.m.
It has been a big year for Baker, who also is fire chief for Spencer. This spring, Baker graduated with a bachelor’s degree in business from Catawba College after several years of attending night classes.
In the previous two Carolina Brotherhood trips, Baker had to take along some of his college homework and tackle it at night. He’ll still have a little bit of work each evening, Baker said, keeping in contact and taking care of some things back in Salisbury.
You can follow the group’s progress on Twitter (@CarolinaBHood), and riders are using the hashtag #CBH14.
You also can like and support the team on Facebook at http://tinyurl.com/732byjm.
A Global Positioning Satellite link, established on the “Rider Tracker” tab on Carolina Brotherhood’s website (www.carolinabrotherhood.com), allows people to follow the cyclists in real time.
Donations also can be taken through the website.
Contact Mark Wineka at 704-797-4263.