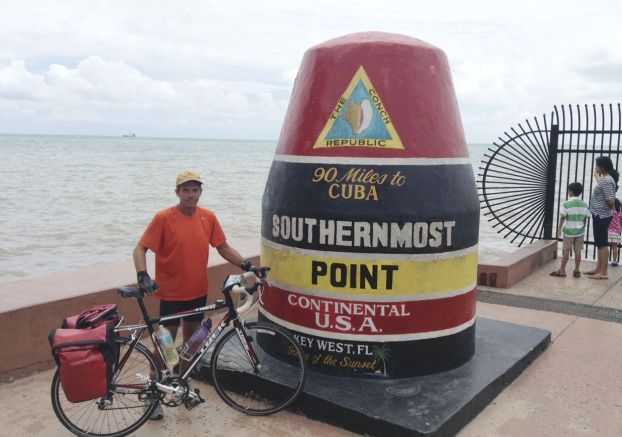 After a night of heavy thunderstorms and predictions for more, I woke with plenty of excitement and anticipation about reaching Key West today. I was already in new territory, having never been to the Keys at all before. The strong headwind from yesterday was expected to carry over to today as well. I could see the storms in the distance but knew that the weather could change drastically by the time I covered 50 miles.
I stopped at the store before leaving and took a picture of the Turtle Hospital across the road. These turtles are treated well in Florida. I also took a picture of the Sandpiper Motel where I spent the night. It was another wonderful place, in some ways left over from many years ago.
Right away, I could see signs of all the flooding from overnight. Other parts of Florida had more of that today, but I never felt a drop. The historic and somewhat mythical Seven Mile Bridge was in sight as soon as I cleared the city limits. I rode right onto the bridge following a woman on a beach bike. Lots of people were using the bridge for running, biking and fishing. The new bridge runs parallel to it and of course all the vehicle traffic is on it.
About three miles into the bridge, I realized that the bridge was blocked at that point. I had to turn around and retrace my steps back to the end of the old bridge and jump over on the new one. I am probably the only person who took 13 miles to complete the seven mile bridge. No matter, it was fun and I got to meet Darlene Pritchard of Jacksonville, Florida who was walking on the old bridge.
I started passing the various Keys, with Big Pine Key, Ramrod Key, Summerland Key and then Sugarloaf Key passing by. Somewhere along the way, I stopped at the Visitor’s Center and Renee helped me with lining up a room for the next three nights. I got one that I had already considered, partly because it is right down the street from Eaton Bikes who will ship my replacement Trek bike back home. More on my interesting room shortly.
Shark Key and Boca Chica Key were next, but not much to notice. I was excited that Key West was getting closer, enhanced by a demonstration from a few of the fighter jets at the Naval Air Station. The water had cleared up dramatically by this time too.
I had a choice when entering Key West of taking either A1A to ride by the beaches or U.S. 1 to go downtown. The best choice for today included the beaches and I could go find the southernmost marker just south of them. That is what I did, passing by a chance to dip the front bike tire in the ocean for now. I will do that tomorrow, without the weight of my saddlebags to worry about. The beaches were beautiful, but not extensive in size.
The huge marker designating Key West as the southernmost point of the Continental United States is colorful and very popular. Probably 50 or more were continually in line to get pictures made with it. I talked to a girl in front of me who agreed to take my photo. She did a great job, probably knowing way better than me how to operate the iPad. Afterwards, a group of about ten gathered around and wanted to know the story of the ride. It was a very enjoyable and interesting conversation. Half were teenagers and they seemed the most impressed.
I looked at my map from the visitor center and headed for the bike shop, just to stop by and tell them that I had made it to town. Another interesting conversation occurred when one of the mechanics said he was going to do part of my ride in reverse this fall. It will be fun to fill him in on the specifics over the next few days. We agreed to talk again tomorrow afternoon.
On to my hotel, named “Not Your Average Hotel.” It is very unique. The place is huge, though it looks like you are entering a historic older home. There are five various sized buildings here. My room has three beds, state of the art fixtures, and no tables or chairs. The concept is to use the beds for “TV beds.” It works for me, since I am the only one to use the three beds. Another interesting thing is that the door key does not have to be inserted. You just wave it in front of the door and the light flickers so that you can open the door.
So tonight, I am in Key West after riding 59 miles today. Tomorrow, I will get immersed in Key West and go see some things. Already tonight, I walked around town some and have been confronted by a rooster. No kidding! I will have a picture of that tomorrow and some more interesting things along with a few final thoughts on the ride from Maine to Key West. Right now, I am ready go try out this space age shower.
Rowan County resident David Freeze has cycled from Bar Harbor, Maine, to Key West, Fla. Contact him at david.freeze@ctc.net.

It was with some uncertainty that I left Homestead and headed south toward the Keys this morning. The weather forecast... read more