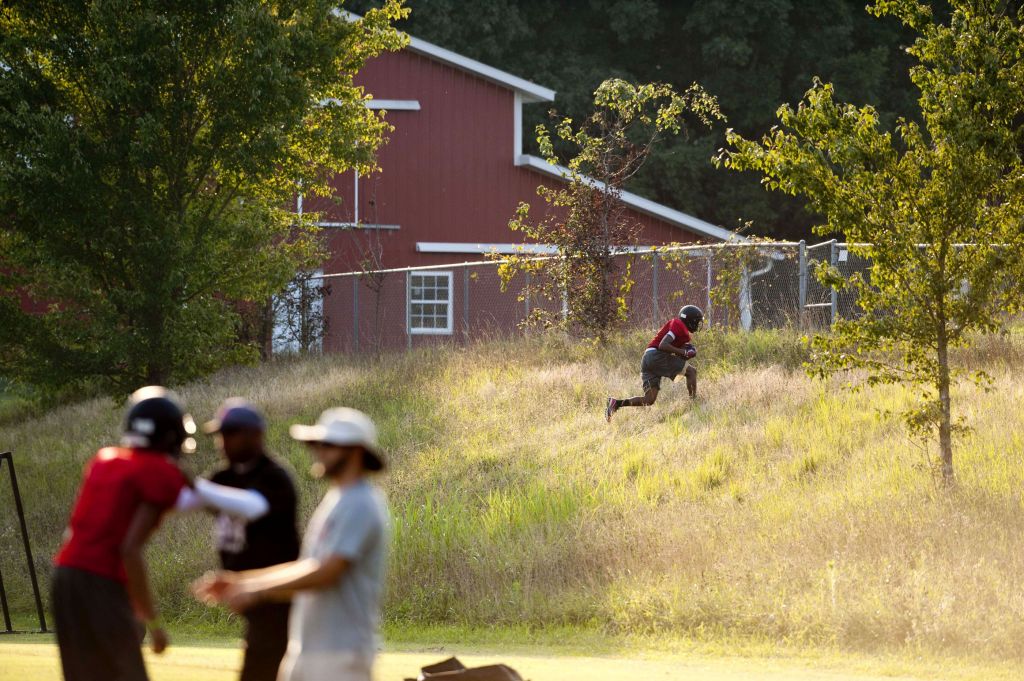 LANDIS — South Rowan coach Jason Rollins is one of those folks who would stay upbeat even if a tree fell on his house, his dog ran away and his car was repossessed.
Rollins enters his ninth season, smiling as often as he did when he entered his sixth, seventh and eighth seasons. He’s still beaming, even though since a 9-3 mark in 2009, it’s been a steep, uphill climb.
South football made history last season, although the Raiders made history of the same sort that Benedict Arnold and George Armstrong Custer did. It was bad-news history — the first 0-11 in the school’s 53 years of football and the most points allowed in a season (540) in county history.
Ouch.
It was a combination of things. Injuries and a tough schedule contributed, but the bottom line was not enough size, not enough depth and not enough speed. South could’ve won the Northwest Cabarrus game and should’ve won the Cox Mill game, but that was about it as far as having a chance. A 6-6 West Rowan team blasted South 65-7 and a 4-8 East Rowan team rolled South 61-26.
Still, Rollins has mastered the-glass-is-half-full philosophy, and he sees positive things rising from the smoldering ashes of the 2013 season.
“I know people look at it and say, ‘Well, they didn’t have a win,’ but the coaching staff saw these kids getting better every week,” Rollins said. “From the first day to the last day, we saw those kids get better. That’s going to be a big building block for this season.”
Unfortunately, it’s not like the SPC has suddenly gotten easier. Concord lost a lot of defense and Central Cabarrus lost a lot of offense, so maybe they’ll come back to the pack some. But West Rowan and Carson figure to be better than a year ago. Everyone in the league is dangerous, so South could still be the underdog in all eight league games.
Still, there’s no doubt South is going to be improved and will have a better chance than a year ago. As bad as the final numbers were in 2013, the preseason numbers are outstanding. Rollins said 95 signed up to play and 87 were present on the first day of practice.
“We’ve got a very solid senior core, more than 30 seniors,”he said. “Our jayvee numbers were way down last year, but we’ve got a lot more freshmen this year than what we’d expected.”
QB Aaron Kennerly, an all-county candidate when he’s healthy, is fully recovered from the broken collarbone that ended his junior season. He looks fit, confident, taller and stronger. That’s stronger physically as well as stronger-armed.
There are big guys (offensive lineman Eric Finger), tough guys (linebacker Burke Fulcher and defensive lineman Alex Parham), tall guys (towering defensive end Reagan May) and fast guys (receiver Eric Stowe), who survived last season and have come back determined to have a better one.
“We’re a lot stronger,” Rollins said. “This spring and summer it was all about the weight room for us. You can X-and-O all you want to, but if you’re not strong enough, it doesn’t matter. We did get outside some this summer, but every day for us starts with the weight room. The weight room has been priority No. 1 and that will continue.”
There are some reinforcements who have arrived at South from different angles — from New Bern, from Myrtle Beach and from A.L. Brown. Rollins calls former Wonder Jomorya Cousin, a sophomore, a “really good-looking, young running back.”
Rollins said South is four-deep at running back for the first time in a while and QBs coach Bobby Myers also has four good athletes to work with.
South also added depth from within.
Qwan Rhyne, a football sensation in middle school and an all-county basketball player last winter, has come out for the squad. So has Alec Stewart. The son of Cox Mill football coach Craig Stewart, Alec is expected to make an impact as a receiver. Tireek Wilder, an explosive track and basketball athlete, also has emerged from gridiron hibernation.
“Those kids saw a need and came out, but a big part of that was coaches knocking down doors to reach kids since last season ended,” Rollins said. “We had some kids that had kind of disappeared for a while, but usually when you can get one kid to commit, you end up pulling in three more kids with him.”
New faces on the South coaching staff include Dean Mullinax and Josh Mullis, but mostly it’s the same seasoned cast of characters, including veterans Jarrod Smith, Jim Brooks, Thad Chrismon.
South will be very busy next week, with activity scheduled Monday (at Mooresville), Wednesday (a joint practice at South with Lake Norman and North Rowan) and Friday (a scrimmage against West Iredell at Mooresville).
South kicked off its official practice sessions with a Midnight Madness, although Rollins said the Raiders didn’t solicit attention and kept things as low-profile as possible.
“We’re staying quiet down here, just putting in our work, keeping good attitudes and not tooting our horns,” he said. “The kids are doing well, and things can only go up.”