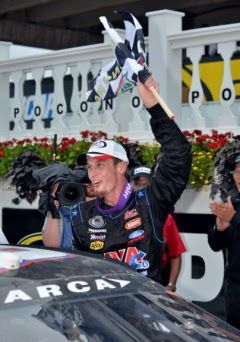 Rookie driver Justin Allison (West Rowan) won his first ARCA race on Saturday at Pocono Raceway.
Allison became the first Allison to visit Victory Lane since the late Davey Allison won at Richmond in 1993.
“I’m at a loss for words,” Allison said. “I know we had a good car, just a little bit tight, but we made the right calls. I can’t thank everyone enough, HaVACo, Rush Racing Products and Team BCR.”
The 22-year-old Allison posted the second-fastest lap in practice and qualified fifth for the Modspace 125.
The start of the race was pushed back an hour by a weather delay.
Allison fell as far back as 17th in the early going, but the right pit calls were made and he took the lead for good with 11 laps to go.
“Will (Kimmel) was trying to make ground on us at the end, but we had them in turn 3,” Allison said. “I don’t know what it is about this track, but I love driving here. Yes, it’s a 2.5-mile track, but you have to drive it like a short track and take each corner at a time.”
Added BCR team manager Howard Bixman: “Justin did a great job in the spring race here and for him to win this is not only big for him, but the entire Allison family,”
MaxPreps rated West Rowan fifth among the state’s dominant programs over the last decade.
West went 121-21.
West ranked behind Independence, Butler, Charlotte Catholic and Dudley.
Rounding out the top 10 were Reidsville, Richmond County, Shelby, New Bern and Northern Guilford.
Thomasville was ranked 14th and Concord 18th.
The Augusta GreenJackets won 5-2 against the Kannapolis Intimidators at CMC-NorthEast Stadium on Saturday.
Kannapolis (51-58) won the first game of the four-game series, but Augusta has won the last two.
Trey Michalczewski had a two-run double for Kannapolis, while former Charlotte hurler Tyler Barnette fanned seven batters for a career high.
The teams play today at 5:05 p.m.
• Kannapolis catcher Jeremy Dowdy, who played at Appalachian State, has been promoted to Birmingham. He’ll be replaced on the roster by Zach Fisher.
Results from the 3000 meters on the final day of the AAU Junior Olympics in Des Moines, Iowa.
13-year-old girls:
36th: Aubree Cain: 14:17.58
14-year-old boys:
11th:Andrew Burgess: 10:13.78 (PR)
15-16 boys:
23rd: Cameron Butler: 10:09.62 (PR)