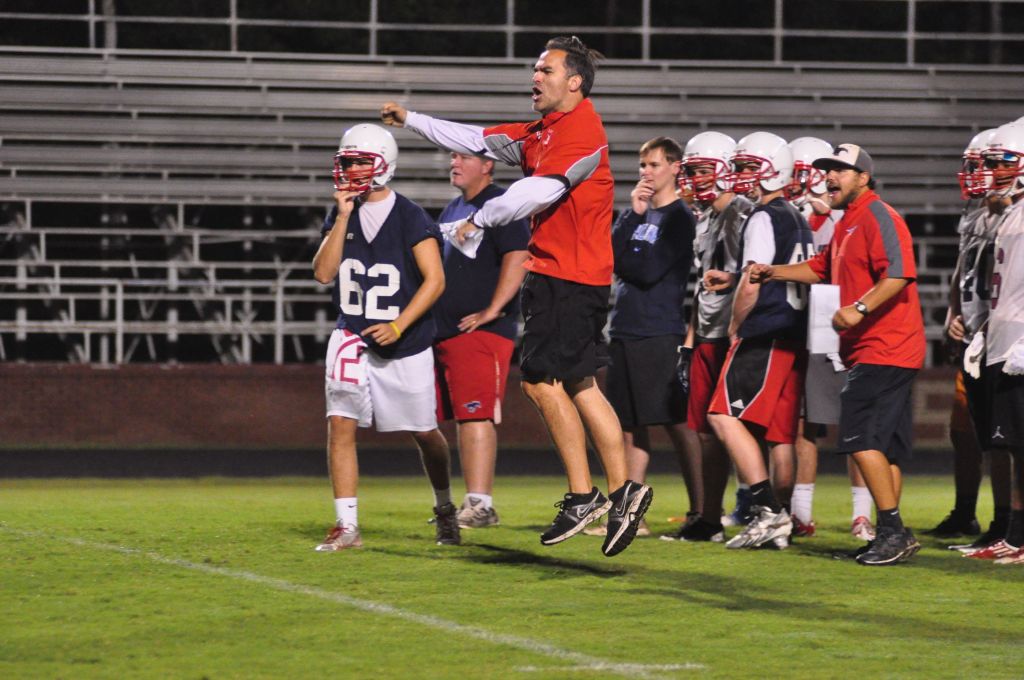 GRANITE QUARRY — If you’ve watched East Rowan football over the years, you’ve seen the Mustangs generally run the ball on offense and try to beat you with a tough defense.
But it could be a new era in Granite Quarry. New coach Ken McClamrock is in town from a successful program down the road. The Mustangs’ set receiving records last year in light of starting running back Calvin Edwards’ injury.
The Mustangs burned the midnight oil in their first public display of the season with a “midnight madness” practice, the first one the county has had in a long time.
Staying up late was no sweat for an East team hungry to avenge a disappointing season last year. The passionate McClamrock was emotive after just about every play during the 7-on-7 scrimmage session, giving out fist bumps, high fives and occasional chewing out.
The former Concord and North Mecklenberg assistant aims to reinvigorate a team that slumped last season by instilling new offensive tactics and old-fashioned tough love. McClamrock is the eighth East coach since 2002 and trying to construct an identity his players can connect with. At 32, he’s young enough to get through to them.
“I like to be fired up,” McClamrock said. “I’m a fired up guy. Once we start to complete, we’ll be up in the kids’ grill.”
Around 50 varsity players were on the field for the first practice with a decent amount of supporters in the stands. The coaching staff said there were around 80 total players including the junior varsity.
McClamrock was hired in March to replace East grad Danny Misenheimer after a two-year stint. He was part of Concord’s two straight trips to the state 3A championship game, although in a reduced role last year after his wife birthed twins.
The coach is high on his offensive line, primarily the big guys up front like guard Daniel Jones (6-foot, 300 pounds) and junior tackle Sawyer Kimmer (6-5, 275).
“He’s a strong kid and got great footwork,” McClamrock said of Jones. “He’s the leader of our offensive line. We’re only going to go as far as our offensive line takes us.”
Jones said he and linebacker Shiheem Saunders were invited to a Shrine Bowl combine in Mooresville.
“The energy’s just a lot better then it has been,” Jones said. “We’re excited about practice and getting better every day.”
“Kids got after it with a lot of energy and a lot of enthusiasm,” McClamrock said. “Having their girlfriends up in the stands helped out with that.”
During the 7-on-7, Saunders pummeled Austin Wyse on a pass over the middle to garner the biggest reaction from teammates. Saunders blocked an extra point late in the game to preserve a 21-20 win last year at Cox Mill.
After that win in Week 3, it was rough. East dropped six of its next seven and had to beat South Rowan to advance to the playoffs.
East ran the split-back veer option under Misenheimer, but look for it to go vertical more this year with the Mustangs using more of the shotgun formation.
A more wide-open offensive scheme could highlight players like quarterback Sam Wyrick and twin brother receiver Seth Wyrick, both three-year starters on the varsity and all-county members last year.
“Of course I like the new offense coming in,” said Seth Wyrick, who broke a school record for catches in a season last year with 66. “We can use all of our assets. I like [McClamrock’s] attitude towards everything. He proves hard work and work ethic go far.”
Naquis Caldwell, who briefly played for East basketball last year, caught a few passes and Senior Tre Gillespie got the majority of handoffs. Jake Boltz could be a factor in the backfield and Max Wall was a solid freshman running back with three touchdowns against South.
Senior defensive back Willie McCree intercepted a pass from Wyrick and had a pass breakup.
“The defense played well tonight,” McClamrock said.
East is looking for its first conference championship since 1997.
There’s a tough start on Aug. 22 at North Rowan, which has beaten East three straight times. Salisbury is the Week 2 opponent, followed by an off week before the South Piedmont Conference opener against Cox Mill.
“Our coaches are working their butts off and putting the kids in position to be successful,” McClamrock said.