‘I hope and pray she comes home’ 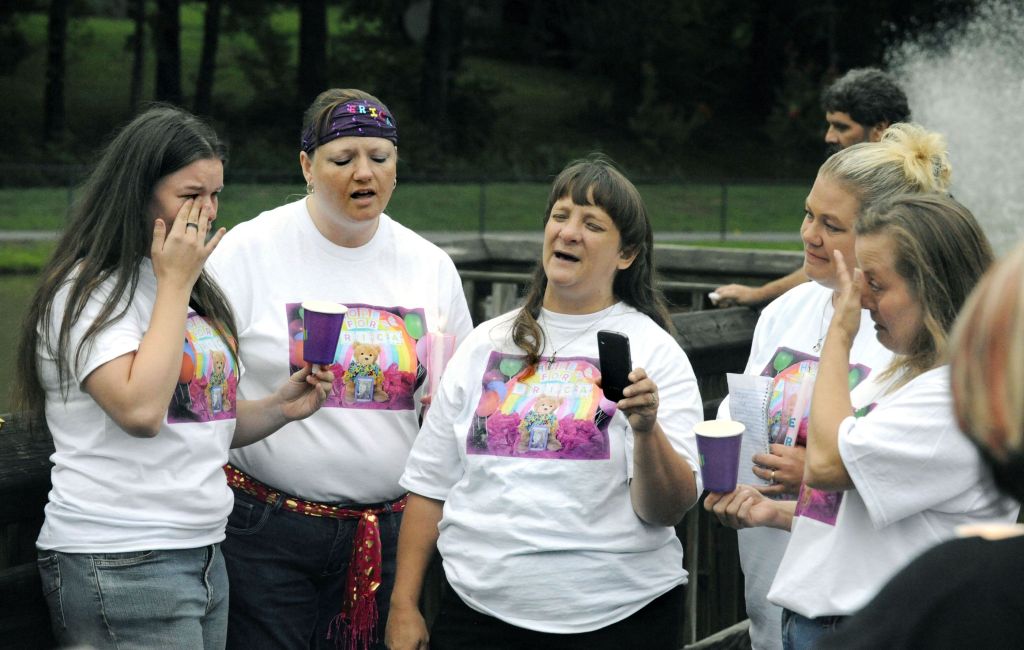 GRANITE QUARRY — When Angie Treadaway first heard about missing teen Erica Lynn Parsons in the news she had no idea the young girl’s biological mother was her friend Carolyn Parsons.
The two women worked together at a fast food restaurant in Mooresville almost seven years ago.
On Friday night they were reunited on a cloudy evening for a candlelight vigil and balloon release to honor Erica. The vigil was held at Granite Lake Park.
Carolyn, along with volunteers, planned the vigil in September before Carolyn returned to Louisiana.
She’d been in North Carolina several months ago to talk to law enforcement and recently moved back to North Carolina a few days ago.
It was important, Carolyn said, to be able to mark one year since Erica was reported missing. She wanted a “celebration” that showed she was continuing to hold out hope that one day her daughter would return.
Carolyn has been very vocal about her disdain for Casey and Sandy Parsons, Erica’s adoptive parents.
The couple have said they don’t know where Erica is now, but allowed her to live with her paternal biological grandmother, Irene Goodman.
Casey said they met Goodman, known to them as Nan, in the parking lot of a Mooresville fast food restaurant. The two have not seen Erica since November or December 2011.
Carolyn Parsons, family members of Billy Goodman, Erica’s biological father, and law enforcement have said there is no Irene Goodman.
The Parsonses’ son, Jamie, reported Erica missing a year ago. Since that time the Rowan County Sheriff’s Office began looking into her disappearance. The FBI and State Bureau of Investigations came onboard to aid in the investigation.
Casey and Sandy Parsons have said they were duped into believing the woman they met was Irene Goodman. Investigators have said Casey and Sandy have not been cooperative and have not told the truth. The couple denies any wrongdoing.
“When I found out about it, I cried. It really bothered me. It breaks my heart,” Treadaway said of Erica’s disappearance.
She said she wanted to attend to show her support and because she was unable to attend the other vigils and events because of work.
“I hope and pray she (Erica) comes home,” Treadaway said.
Once everyone had signed a petition to urge Gov. Pat McCrory to get involved and signed a poster for Carolyn, they each took a balloon, some took a few.
Carolyn said she intentionally chose colorful balloons because she wanted it to look like the color of a rainbow “because rainbows mean hope,” she said.
Teresa Goodman, Billy Goodman’s sister, said she’s attended all of the events and wanted to be at this vigil as well.
“I want to know where she’s at. I want her to be found,” Goodman said.
Goodman said she doesn’t blame investigators and believes they’ve done all they can. She noted investigators had a late start because Erica had already been gone nearly two years.
Goodman said she begged her brother to let her raise Erica instead of relinquishing his parental rights. She attended with her husband, Tony.
Teresa reached out to Carolyn at a previous vigil outside the Parsons’ Miller Chapel Road home.
“I appreciate every single person that’s here. I appreciate every person that says a prayer at night,” Carolyn said.
She said everyone who was there from family, friends, strangers and the media is what’s keeping the story alive.
“Nobody stops. We don’t stop,” Carolyn said.
Others gathered around a pier and began chanting “nobody stops. We don’t stop,” while Carolyn called it her new motto.
William Davenport, Carolyn’s boyfriend of 13 years, said he’s 100 percent behind her.
He said he’s seen the toll this ordeal has taken on Carolyn.
“It’s been stressful,” he said.
He added that Carolyn hardly sleeps and has bad dreams. Carolyn has talked about the support her boyfriend has shown throughout this whole process.
Kathy Boyles stood with a friend, balloons in hand and a T-shirt with the words “Hope for Erica” written on it. The shirt was printed at Granite Knitwear and also had a rainbow, balloons, a teddy bear and a picture of Erica on it.
Boyles was there to show support she said.
“She’s one of our girls missing,” Boyles said.
She hopes for peace for Erica and for the “truth to come out.”
Selena Stone doesn’t know anyone involved, but has read every newspaper article about Erica.
“It’s heartwrenching. It’s time for her to come home,” Stone said.
She’s wanted to attend the other events, but was unable to do so because of work.
Stone wanted to show her support, she said, “to let the community know, let the world know we are a community that stands together.”
Sandy and Casey launched a website, www.helpfinderica.com, on Wednesday. The site mostly defends their actions prior to and since Erica was reported missing. The website appears to be written from Casey’s perspective and includes details about Carolyn Parsons, but few details about Erica or Irene Goodman that have not already been shared.
Carolyn has moved back to North Carolina and has said she will not stop until Erica is found. She plans to keep her daughter’s face and name in the public spotlight.
Casey and Sandy were indicted this week on federal charges alleging they continued to receive government assistance for Erica’s care long after she went missing. The couple were released on a $25,000 unsecured bond and were placed on electronic monitoring.
A $50,000 reward for information leading to Erica’s location or return is still in place.
Anyone with information about the disappearance of Erica Lynn Parsons is asked to contact the Rowan County Sheriff’s Office, 1st. Lt. Chad Moose at 704-216-8687 or Investigator Sara Benfield at 704-216-8739.
Contact reporter Shavonne Potts at 704-797-4253.