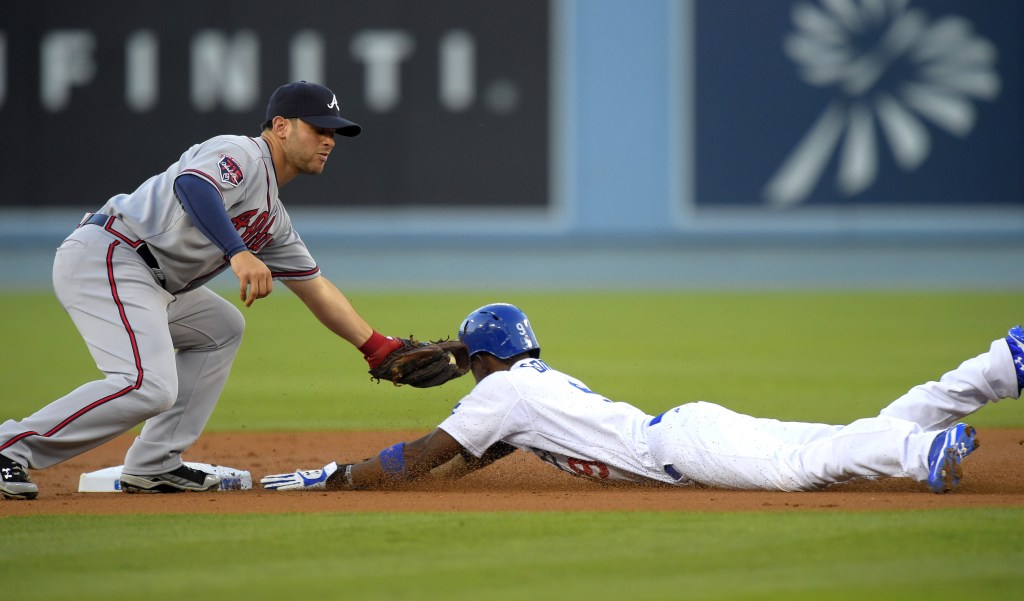 LOS ANGELES (AP) — Julio Teheran battled Clayton Kershaw until the end only to come up a hard-luck loser, sending the Atlanta Braves out of town with three straight losses to the first-place Dodgers.
Teheran allowed five hits in eight innings of a 2-1 defeat on Thursday night in his third complete game of the season and first in a losing effort. He struck out nine and walked three.
“He did a great job against a dangerous lineup with a lot of good hitters,” Atlanta rookie Tommy La Stella said. “He kept them off-balance all night and gave us a shot.”
Atlanta infielder Chris Johnson didn’t play, leaving him a great seat for the showdown.
“You had two of the best arms in the big leagues throwing against each other, and you know that one of them was going to come out on the short end,” he said. “It stinks for us that it was Julio, but you tip your cap to the other guy because it was Clayton Kershaw.”
Kershaw scattered nine hits and struck out nine while notching his second consecutive complete game following his three-hit shutout at San Francisco last weekend.
“I had my best and everything was working, but I made a couple of mistakes and they got two runs,” Teheran said. “It was fun (pitching against Kershaw). I know it’s not that easy to face him, but we had a real battle out there.”
Teheran (10-7) fell behind in the first. Yasiel Puig walked and scored from first when Adrian Gonzalez doubled to deep right-center field.
“I don’t know how much better we can pitch,” Atlanta manager Fredi Gonzalez said.
Puig homered in the third as the Dodgers swept the Braves for the first time since taking four in a row from July 26-29, 1990, at home.
Atlanta closed to 2-1 on Justin Upton’s infield single to third in the ninth.
Juan Uribe charged in to field the ball and fired to first, where Gonzalez stretched for the throw. Upton was called safe by umpire Mike Estabrook. Manager Don Mattingly challenged the call as the crowd grew rowdier. Kershaw crouched behind the mound waiting for a decision.
It took 2 1/2 minutes before the umpires upheld the call, putting the potential go-ahead run on first. Evan Gattis grounded out to shortstop to end the game.
“I know Gattis is upset, but if we had to pick anybody to go up there and hit in that situation, it would be him,” Johnson said.
Kershaw (13-2) pitched his second consecutive complete game for the second time in his career. He is unbeaten in his last 11 starts with a 10-0 record since June 2. The left-hander beat the Braves for the first time during the regular season in his career.
TRAINER’S ROOM
Braves: Outfielder Jason Heyward missed his third straight game with a sore back that he strained last week chasing a foul ball. Gonzalez said he hopes Heyward can return sometime this weekend in San Diego.
Dodgers: They outrighted left-hander Scott Elbert to Triple-A Albuquerque.
ON DECK
Braves: Atlanta heads to San Diego for a three-game series beginning Friday. Left-hander Mike Minor (4-6, 5.23 ERA) will start the opener.
Dodgers: The Cubs arrive Friday for a three-game set, with Dan Haren (8-8, 4.49 ERA) taking the mound. The right-hander lost all four of his starts in July.
CLEANING UP
The Braves got swept for the seventh time this season. They closed July with a 13-13 record in the month.
GOING GONZO
The Dodgers’ Gonzalez is hitting .375 with a home run and 11 RBI in 12 games since the All-Star break.