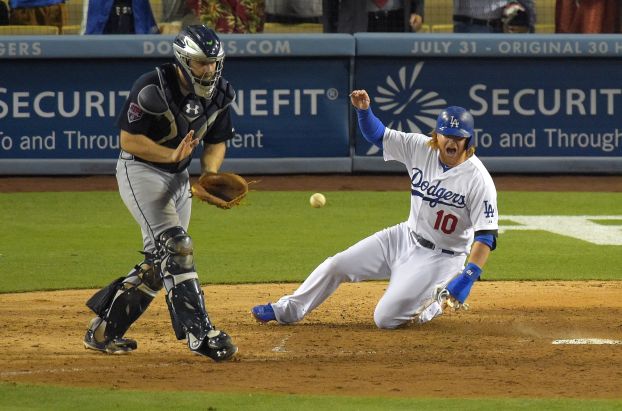 Kemp scored the Dodgers’ first two runs of the game, including his 11th homer leading off the second.
Pinch-hitter Justin Turner singled to open the 10th and took second on a wild pitch by David Hale (3-3). Kemp followed with the winning single to left.
J.P. Howell (3-3) got the win in relief, walking two and striking out one in one inning.
The Braves tied the game 2-2 on Justin Upton’s home run off closer Kenley Jansen leading off the ninth.
Juan Uribe gave the Dodgers a 2-1 lead in the eighth on a hard-hit single with two outs to shortstop Andrelton Simmons, whose throw home sailed wide as Kemp crossed the plate.
Greinke allowed one run and five hits in eight innings while walking one. He was making his first start at home since June 28.
Kemp, who homered twice on Tuesday night, tied the game 1-1 on his 11th homer of the season.
Simmons had an RBI single that gave Atlanta a 1-0 lead in the second.
Atlanta starter Alex Wood gave up one run and six hits in seven innings. He struck out eight and walked two.
TRAINER’S ROOM
Braves: Outfielder Jason Heyward was out of the lineup for the second straight day with a sore back he strained last week chasing a foul ball. Jordan Schafer started in right field for the first time this season. Manager Fredi Gonzalez said it’s likely he’ll give Heyward an extra day off once he says he’s ready to go again.
Dodgers: Hyun-Jin Ryu will get an extra day of rest before he starts on Saturday. Dan Haren, who has lost all four of his starts this month, will take the mound for Friday’s series opener against the Cubs.
ON DECK:
Braves: Julio Teheran (10-6, 2.71 ERA) takes the mound for the series finale on Thursday. The only time the right-hander has faced the Dodgers was in last year’s NL division series, when he tossed 2 2/3 innings in a loss.
Dodgers: Clayton Kershaw (12-2, 1.76 ERA) is coming off a three-hit shutout victory over the Giants in his last start. The left-hander leads the NL with 11.30 strikeouts per nine innings as a starter. He has 140 strikeouts and 15 walks in 112 1/3 inning.

CHINA GROVE — A.L. Brown will celebrate the 25th anniversary of its 1989 3A football state championship this fall, a... read more