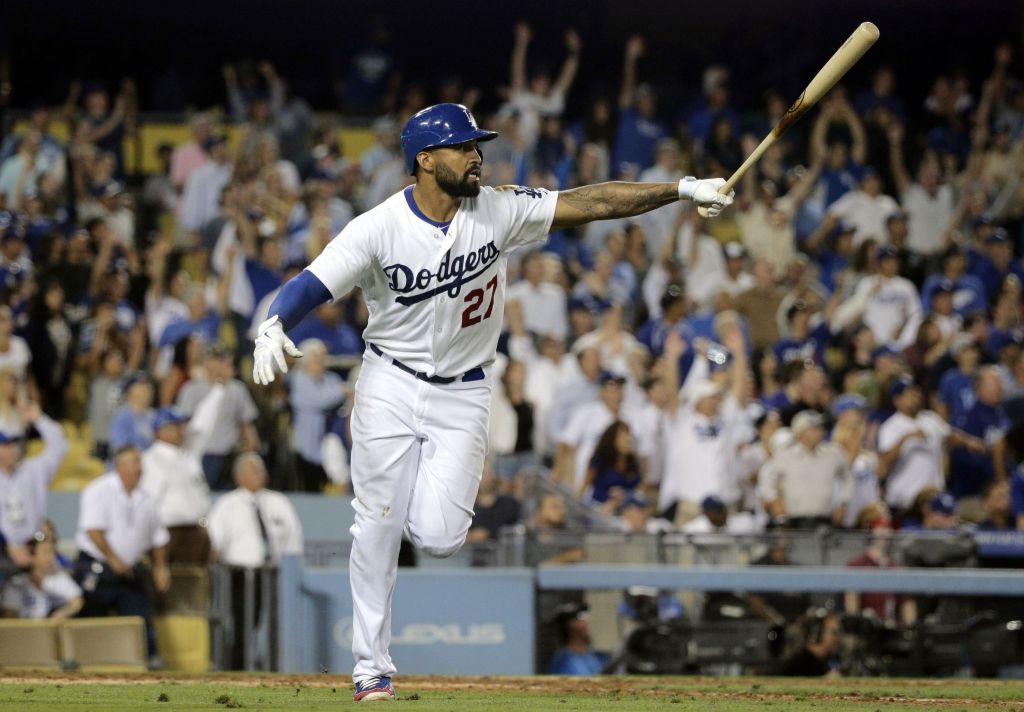 LOS ANGELES (AP) — Matt Kemp hit a pair of two-run homers, Yasiel Puig had four hits with two runs scored and the first-place Los Angeles Dodgers beat the Atlanta Braves 8-4 Tuesday night for their fourth straight win.
The Dodgers trailed twice in their first meeting with the Braves since eliminating them in a National League division series last season.
Puig came up a home run short of hitting for the cycle, lifting his team-leading average to .317 despite getting hit on the head by the ball while sliding head-first in the seventh. He struck out in his final at-bat.
Los Angeles rallied from a two-run deficit to tie it 4-all on an RBI double by Adrian Gonzalez and a RBI single by Carl Crawford in the fifth.
That set the stage for outfielders Crawford and Kemp to put the Dodgers ahead in the seventh.
Crawford had an RBI groundout to second base and Kemp followed with his second two-run shot over the center field fence for a 7-4 lead. Gonzalez doubled in another run in the eighth.
Brandon League (2-2) got the victory in one inning of relief, allowing one hit and one walk. Kenley Jansen got four outs for his 31st save.
Kemp’s first two-run shot in the second briefly gave the Dodgers a 2-1 lead.
Freddie Freeman, who went 2 for 4, put Atlanta back in front 3-2 in the third with his own two-run homer. Tommy La Stella was 3 for 4 with a run scored as the Braves’ three-game winning streak ended.
Anthony Varvaro (3-3) took the loss, giving up three runs and four hits in one relief inning.
Dodgers starter Josh Beckett struggled through another outing. The right-hander gave up four runs and nine hits in 4 1-3 innings, struck out two and walked one in dropping to 0-5 in his last six home starts.
Braves starter Aaron Harang faced the Dodgers for the first time since pitching for them in 2012. The right-hander yielded four runs and nine hits in six innings, struck out three and walked one after going 4-0 in his previous six outings.
TRAINER’S ROOM
Braves: Right fielder Jason Heyward was out of the lineup with lingering soreness in his lower back after straining himself while chasing a foul ball last Thursday. Rookie reliever Shae Simmons was placed on the 15-day DL with a sore shoulder. The team recalled reliever Juan Jaime from Triple-A Gwinnett to take the roster spot of Simmons, who accompanied the team for the start of an eight-game, three-city road trip.
Dodgers: Left-hander Scott Elbert was reinstated from the 60-day DL and designated him for assignment. He made 15 rehab appearances, including two starts for Rookie-advanced Ogden, Class-A Rancho Cucamonga and Triple-A Albuquerque as he worked his way back from Tommy John surgery last year. Elbert was 0-1 with a 4.26 ERA for those minor league affiliates. He last pitched in the majors in August 2012.
ON DECK
Braves: Left-hander Alex Wood (7-8) starts for the Braves in the middle game of the series. He has pitched 2 2-3 scoreless innings in two career games against the Dodgers, allowing one hit and striking out three.
Dodgers: Zack Greinke (12-5) starts for the Dodgers. The right-hander is 6-1 at home with a 2.73 ERA and holds opposing batters to a .222 batting average. He is 1-1 with a 3.50 ERA in three career starts against the Braves.