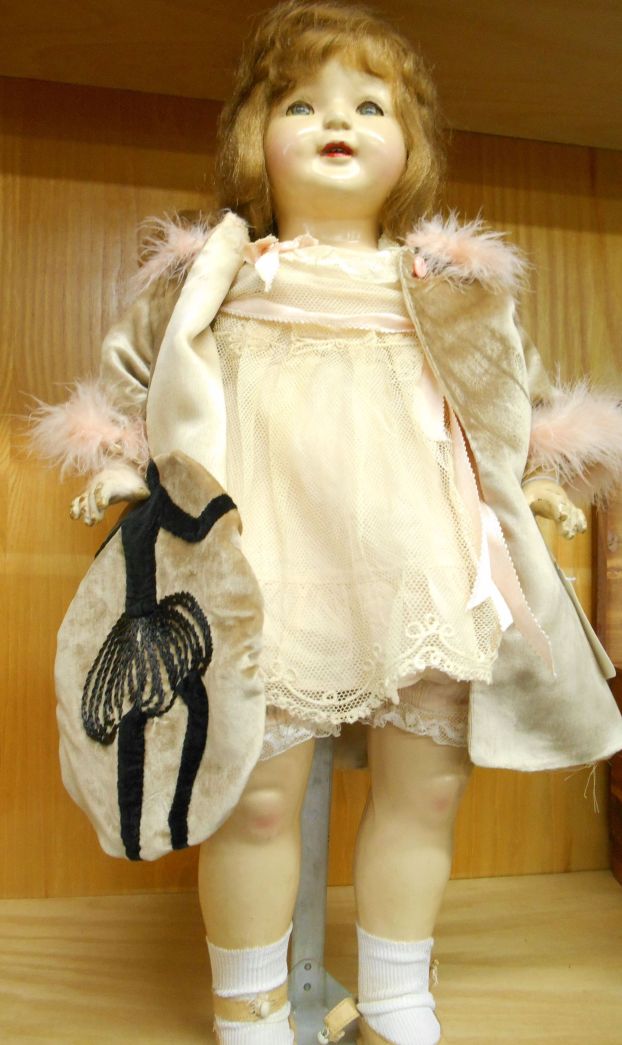 Recently the Spencer Doll and Toy Museum received an historic treasure in the form of a doll given to the museum by the second and third generation of the owning family.
An early E.I Horseman composition doll with “crier” was given to Elizabeth Meier on her sixth birthday in 1926 in Wichita, Kan. Elizabeth instantly fell in love with her new doll and named her Earline after her father, Earl Meier. The 24-inch doll has a composition head with sleep eyes including lashes, composition arms and legs on a soft cloth body with a crier inside.
Elizabeth’s grandmother, Irene MacKenzie Ashe (1860-1950) was a descendant of Governor Samuel Ashe of Bath County, after whom both Ashe County and Asheville are named.
Irene also happened to be an excellent seamstress and fashioned a stunning wardrobe for Earline over the years, including a beige velveteen coat lined with silk and trimmed in feathers and a blue taffeta ball gown trimmed in fine lace.
In all, there are ten complete outfits and many pieces of underwear that belong to Earline and not one machine stitch is in the lot! Every stitch on each piece of clothing is done by hand and has lasted approximately eighty years.
The descendants of Elizabeth brought Earline and her entire trunk to the Spencer Doll and Toy Museum in June. Elizabeth Krijgsman and her daughter, Alix, of Pittsboro, lovingly donated their family treasure to the museum so that others could enjoy Earline. The doll has lived in Europe for almost 30 years with Mrs. Krijgsman before they settled in the Pittsboro area and now Earline’s passport reads, “Spencer, NC”.
Earline and all her finery are on display at the museum Wednesday-Saturday from 10 a.m. to 4 p.m. Located at 108 Fourth St. across from the NC Transportation Museum in Spencer, the museum has toys, working trains, doll houses and miniatures as well as dolls from 1850-1980. Find us at www.spencerdollandtoymuseum.com or call for information 704-962-9359.

Just before 6 on Tuesday evening, Shelby Lookabill drags heavy cushioned chairs into a circle in the activity room of... read more